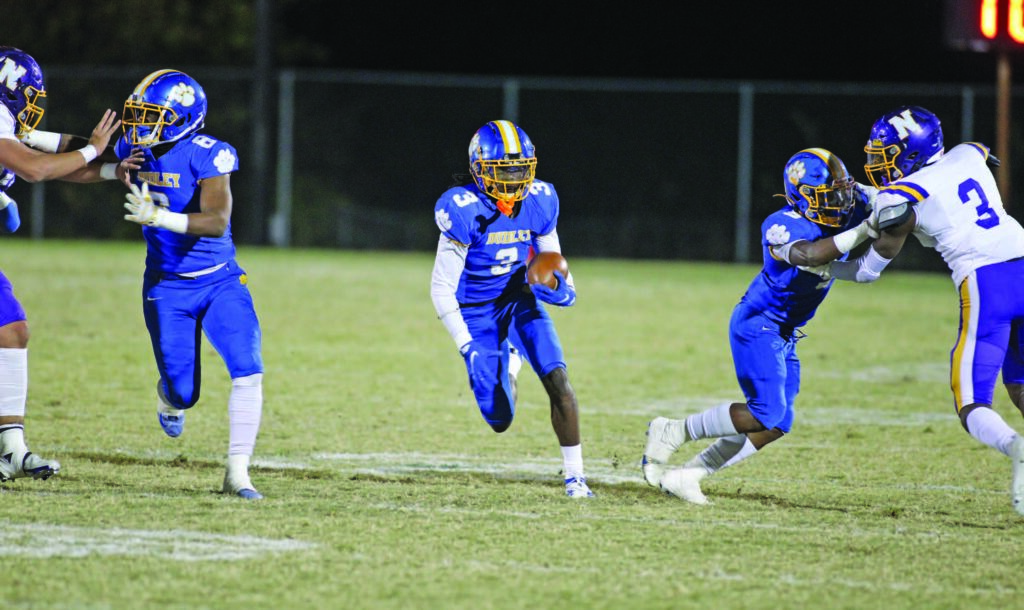 In first quarter action, Dudley senior running back Mehki Wall (#3) makes a 50-yard sprint down the sideline to the end zone for his second touchdown to make the score Dudley 14, N. Henderson 0.
Photo by Joe Daniels/Carolina Peacemaker.

The Dudley Panthers played host to the North Henderson Knights in a North Carolina High School Athletic Association (NCHSAA) first-round 3-A state football playoff game held at J.A. Tarpley Stadium. The Panthers crushed the Knights 60-0, improving to 10-1 overall while the Knights fell to 4-7 overall. Dudley will host Ledford (Thomasville) this weekend in the second -round of the state 3-A playoffs.

The Panthers opened the game scoring on their first seven offensive possessions leading to a 50-0 halftime score. Eleven running backs led the onslaught as the Panthers amassed 449- yards rushing including four touchdowns while passing for another 119 yards and four touchdowns. Senior running back Mehki Wall paced the Panthers with touchdown running and receiving in the first quarter. Running back Michael Shaw joined the party with four carries for 112 yards and a score. Jahmier Slade a senior quarterback completed three-of-four passes for 112-yards and three touchdowns while rushing for an additional 82-yards on five carries. While the offense was clicking, the defense pitched a shutout led by senior defensive backs Steven Davis and K.J. Morehead with five tackles apiece.