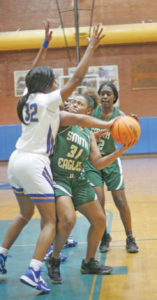 The Lady Panthers jumped on the Eagles early and led 22-0 cruising to a half time score of 57-13. Marissa Wooten, a junior guard paced the Panthers with 22 points. They improved to 6-6 overall and 1-0 in conference play. Smith remained winless on the season having lost 13 straight.

In the nightcap, Smith’s boys posted a 74-51 victory over Dudley. The Golden Eagles led 15-11 after a close first quarter and pulled away the rest of the contest. Ther Golden Eagles still led by 18 early in the fourth quarter, 55-37. Silas Mason, a six-foot-seven, senior guard led the Golden Eagles with a game-high 18 points. Forward Nic McMullin added 16 points while guard Khalid Hinds contributed 14 points.

Smith improved to 13-2 overall and 2-0 in the Triad 3-A Metro Conference. Dudley’s Aydan Gamble, a junior guard, led the Panthers with 16 points while junior forward Franklin Stockon contributed 11 points. The Panthers drop to 11-3 overall and 0-2 conference.