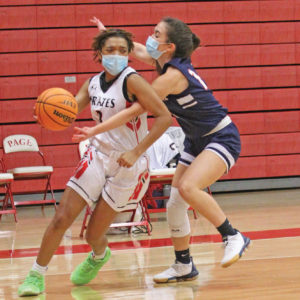 Page’s Candice Williams is fouled on a drive to the basket by Central’s Jayah Shannon. Williams had a team-high 16 points in Page’s Metro 4A Conference victory. Photo by Joe Daniels/Carolina Peacemaker.

The Page Pirates played host to a double header basketball Metro 4-A Conference series featuring the High Point Central Bison. The game was held at Page’s Mac Morris Gym on Friday, Feb 12. In girls action, the Pirates raced to a 23-7 half time lead. They outscored the Bison 38-12 in the second half rolling to an easy 61-19 win. Freshman guard Candice Williams paced the Pirates with a team-high 16 points while senior point guard Meredith Fennie chipped in with 11 points and five assists. With the win, the Pirates improved to 6-6 overall, 3-3 in the conference while the Bison remain winless at 0-10, 0-7.

In the nightcap, Page boys cruised to an easy 56-31 Metro 4A Conference victory. Before the start of the game, Page held Senior Night honoring Zion Williams, Jaden Ellis, Mike Maxwell and Darryl Phifer and their parents. Page led the Bison 16-1 ending the first quarter and 30-10 at the break. Senior Jaden Ellis was the only Pirate scoring in double figures with 15 points. Four other players contributed in the scoring with at least seven points. They included Zion Conner, Zack Goodman, Josh Scovens and Tyler Mcyntire who also had a team high six rebounds. With the win, Page improved to 10-2 overall, 5-1 in the Metro 4-A Conference, while the Bison fell to 1-11, 1-6.