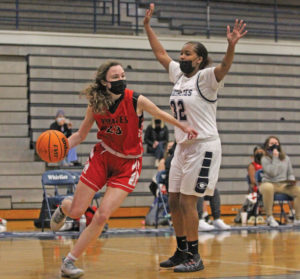 The Page girls rolled to an easy 42-25 win led by senior Reagan Maynard with 12 points and Meredith Fennie with 10 points. Grimsley led 9-7 after the first quarter but were outscored 13-2 during the second quarter to trail 20-11 at the break. For the Whirlies, things never improved as they trailed by as many as 28 during the fourth quarter. Destonie Tisdale, a junior guard, led the Whirlies with eight points. Grimsley drops to 5-3 overall, 1-2 Metro while Page moved to 5-3, 2-1.

In the night cap, Grimsley’s boys cruised to a 69-46 blowout of Page. At the half, Grimsley led 40-24 and Page never got closer than 13 points again. The Whirlies placed four players in double figures with junior Tyler Albright scoring a team-high 26 points. Jayden Watlington and Daniel Cooper scored 11 apiece, while Travis Shaw added 10 points. The Whirlies improved to 6-0 overall, 2-0 in the Metro 4-A, while the Pirates fell to 5-1, 1-1.