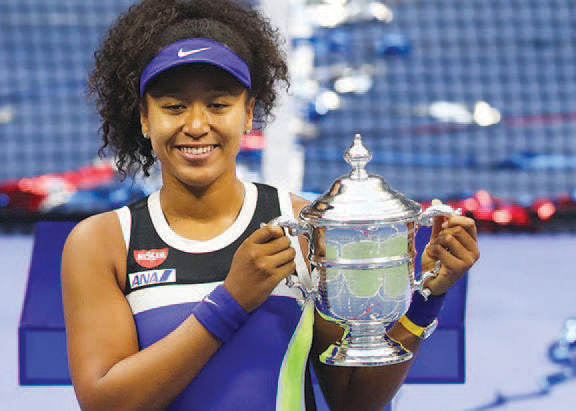 As Naomi Osaka lay on the Arthur Ashe Stadium court for 18 seconds after winning her second U.S. Open, staring into the sky, she recalled watching previous tennis greats do the same.

So much else of what Osaka did on court the last two weeks was never before seen.

She walked into Ashe Stadium two Mondays ago for her first-round match wearing a black face mask. It bore the name Breonna Taylor, a Black woman who was fatally shot by police on March 13.
After Osaka’s three-set opener, she felt confident enough to declare this publicly: she brought seven different masks to the tournament, one for each round through the final, with a different name of a Black person killed in recent years.

“It’s quite sad that seven masks isn’t enough for the amount of names,” Osaka said on Sept. 1, two days after withdrawing before the Western & Southern Open final with a left hamstring injury. “So, hopefully, I’ll get to the finals, and you can see all of them.”

Osaka, the pre-tournament favorite for the first U.S. Open held without ticketed fans, had an awful start to her third Grand Slam final.

Azarenka, a 31-year-old mom aiming to go a record seven years between major titles, won eight of the first nine games and was a point from going up 3-0 in the second set.

Osaka, developing a knack for clutch play in these settings, found the will that brought her back-to-back Slams at the 2018 U.S. Open and 2019 Australian Open. She won six of the next seven games to take the second set. She then handled a back-and-forth decider, breaking Azarenka and serving it out in the last two games.

“Two years ago I maybe would have folded,” said Osaka, who was marvelous in a 2018 U.S. Open final otherwise defined by Serena Williams’ arguments with chair umpire Carlos Ramos. “I’m more of a complete player now.”

The 22-year-old with a Japanese mother and Haitian father became the first woman to win a U.S. Open final after losing the first set since Spaniard Arantxa Sanchez Vicario in 1994. She became the sixth woman to win her first three major finals in the Open Era (since 1968).

“All the credit to Naomi,” said Azarenka, the 2012 and 2013 Australian Open winner who made it past the fourth round of a Slam for the first time since having son Leo in December 2016 and beat Williams in the semifinals. “She’s a champion.”

That’s what made Thursday’s first set so breathtaking. Unlike her earlier performances, Williams came out determined to start fast and play aggressively. She was hitting the ball so hard, it looked like she was practically throwing her body into every ground stroke. There was nothing nervous or tight about the way Williams was playing. She was going for it.