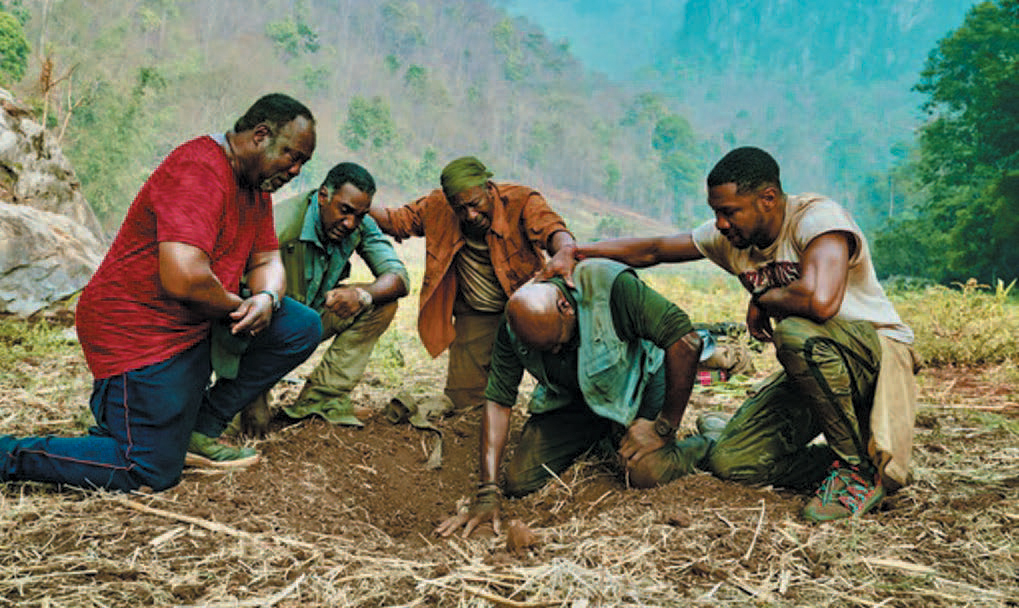 Da 5 Bloods has the potential to be a timely, thoughtful allegory.

They fought together in Vietnam decades ago. Now they’re headed back to Nam to retrieve the body of their fallen commanding officer (Chadwick Boseman, Black Panther) and hunt for a pile of gold. The vets share a brotherly love: Paul (Delroy Lindo, Malcolm X) is high-strung, temperamental and fighting a losing battle with PTSD. Otis (Clarke Peters, The Wire) has a big secret, a lover (Lê Y Lan) he left behind in Saigon. Wealthy Eddie (Norm Lewis, Broadway’s Porgy and Bess) lords over them brandishing his AMEX Black Card like a sword. Then there’s Melvin (Isiah Whitlock Jr., The Wire). And to everyone’s surprise Paul’s son David (Jonathan Majors, The Last Black Man in San Francisco) shows up out of nowhere.

It’s easy to imagine these guys sitting in a barbershop in Harlem, Oakland, Chicago or Atlanta recollecting old times, rehashing old rivalries, sharing anecdotes, talking politics and spouting views on racism, wars and other social issues. Between the lines of their jovial banter are truths about injustice, bigotry, oppression and survival that are illuminating—especially for those who are not African America and don’t know the experience firsthand. As the film follows the gents to Vietnam and they continue their heated conversations on foreign soil, their perceptions become even more intriguing. Who dreamed this up?

The original script for Da 5 Bloods was written in 2013 by Danny Bilson and Paul De Meo (credits include The Rocketeer and video games) and called The Last Tour. Screenwriter Kevin Willmott (Oscar winner BlacKkKlansman) and director Spike Lee adapted their script, putting African Americans in the leads and their stamp on the return to duty plotline. Themes of greed versus human needs and an obvious homage to John Houston’s classic The Treasure of the Sierra Madre give the premise a strong foundation.

Muhammed Ali famously refused to fight in Vietnam, and incisively expressed his conscientious objections: “No, I’m not going 10,000 miles from home to help murder and burn another poor nation simply to continue the domination of White slave masters of the darker people the world over.” In this film, the characters went to Nam and the repercussions of their involvement haunts them, especially as they are confronted by the victims of the war and its atrocities. Says a Vietnamese man who is trying to sell live chickens to Paul: “You killed my father and mother.”

That kind of confrontational, consciousness-raising moment is where the film excels. Belaboring points like that is where it feels strained. One or two of these clashes regarding blame and responsibilities would suffice. When this becomes an overused plot device, those precious moments become redundant and hollow. Overstating is a miscalculation that too often robs this well-intentioned film of more effectively realizing its vision.

For example, classic photos (e.g. Pulitzer-Prize-winning shot of a naked young girl Kim Phuc running from a napalm bomb), graphic archival footage (the execution of Ngyuen Van Lem) and other visual aids are edited into narrative scenes to add a non-fiction effect and educate the viewer. When well placed, these indelible images that changed the perception of the Vietnam War are both revealing and enlightening. Much like the footage and photos of George Floyd’s death, the power of their significance can’t be overstated. In thoughtful, measured amounts, this visual gimmick works. When misplaced, this effect can be a distraction. e.g.: A victim steps on a land mine, faces death and is being cajoled by someone attempting a rescue. In the course of conversation, a photo of Olympic medalist Edwin Moses jumping over hurdles appears. It’s disruptive.

Often the direction of the main characters brings out a fraternal love that is endearing, like watching the guys dance in a nightclub, which is one of the film’s few moments of carefree exuberance. Sometimes the direction piques hostilities among the group that are tribal and volatile. Witnessing a brotherhood descend into anger, mistrust, vitriol and greed would be even more devastating if those scenes were shorter, more to the point and not filled with repetitive grievances. Also, the action scenes, especially the gun battles, seem fairly routine—like those in a standard genre movie. They needed a kinetic energy, bravura style and innovative staging.

Travelogue-like sequences help the film get over its rough patches. Shot in Ho Chi Minh City (formerly Saigon), Vietnam and Bangkok and Chiang Mai, Thailand, the locations are enticing enough to make you want to book a trip to Asia. Credit Newton Thomas Sigel (Bohemian Rhapsody) for the evocative cinematography and lighting brown and black skin perfectly. Shots in hotels, rice fields and forests are also illustrious.

The moody musical score by Terence Blanchard seems like it belongs in another movie. Especially in the action scenes, and particularly during a helicopter crash. Something is askew. A far better fit for the movie is the constant stream of Marvin Gaye’s toe-thumping and socially aware music, with a big nod to his classic What’s Going On album and songs like “What’s Happening Brother.” Gaye was the voice of a generation and his concept record is arguably the most enduring R&B album ever made.

Editor Adam Gough skillfully melts one scene into another, sometimes with overly gimmicky fades; still the footage doesn’t proceed at a solid clip. But it’s hard to blame the film’s inability to keep a beat on his slices. If audiences get restless it’s due to the long-winded scenes themselves, not how they’re mixed over the course of a hefty 2h 34 running time.

Largely because the script makes his character’s choices and behavior increasingly melodramatic, Delroy Lindo gives an over-the top, untamed performance. He shines best in a scene when Paul digs up something from under the ground. The thrill of his discovery is all on his face. It’s brilliant acting. Jonathan Majors masterfully wrestles with the inner turmoil of David who is loved and hated by his father. Majors’ interpretation of his character is sensitive and perceptive.

Overall, the film’s tactic for getting its political/social points across tends to border on being preachy and pedantic. Like a zealous professor who doesn’t trust that his students can listen and learn and prefers to throw knowledge at ‘em with a cannon.

If audiences can get past the script’s weak points and unsubtle approach there are aspects about Black life revealed in this parable that should resonate.