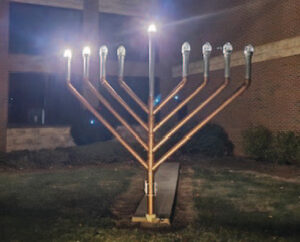 Hanukkah is an eight-day Jewish festival that takes place towards the end of each calendar year. This year, it started on Sunday night, November 28th. The main ritual of Hanukkah is the lighting of candles each evening in Jewish homes and communities. One candle is lit on the first night, two on the second, and so forth through the eighth night. It is also customary to eat foods cooked in oil throughout Hanukkah.

Hanukkah commemorates the first recorded battle for religious freedom in history, as Jewish people faced down the Assyrian Greek forces which had overtaken them in the land of Israel 2200 years ago. This time period is recorded in the apocryphal books of Maccabees, as well as in other historical sources.

Hanukkah is a time of Jewish pride. The Hebrew word Hanukkah means rededication. When the Jewish people returned to their desecrated Temple in Jerusalem, it needed to be repaired and rededicated. Only one canister of oil for the Menorah, the holy candelabrum which needed to be lit each day, was found. That oil should have lasted for only one day. It wound up lighting the ancient Menorah for 8 days.

Was it miraculous that the oil lasted for eight days? Of course. But an even more powerful miracle is that someone, knowing that the oil would only last a day, decided to strike the match and light the oil anyway. Hanukkah brings a message of hope: that the small will be able to overcome those more numerous, that those seen as weak will outlast those who are more heavily armed, and that the oppressed will win out over their oppressors.

This year, the Jewish holiday of Hanukkah began at sundown on Sunday, November 28, and will continue with the last night (the eighth nigh) of celebrations occurring at sundown on Monday, December 6. Here are some frequently asked questions and answers about this religious holiday observed by Jewish people around the world.

Get a menorah and some candles, grab some dreidels and gelt, eat some latkes and sufganiyot; and have a Happy Hanukkah.