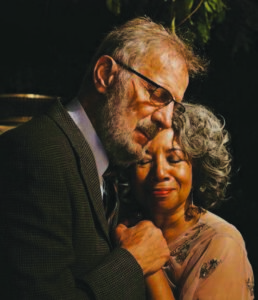 The film Dignity, written, directed and produced by Pat Battistini, stars Lorey Hayes (Anna) and Tom Katsis as a joyous couple wrestling with the decision of how to live out the rest of their lives with dignity.

In 2017 Power Play producer Voza Rivers facilitated the return of Power Play to the festival as a Celebrity Staged Reading. This return followed standing room only celebrity staged readings in New York. Quite a frenzy was created at the festival when Pauletta Washington’s husband (Denzel Washington) flew both Pauletta and Hayes to North Carolina for the performance.

Years between the two Power Play presentations, Hayes was invited to the festival in two other shows that she either wrote or co-wrote. Little Lorey’s Song, Hayes’ one-woman solo show, pays homage to the people of her hometown, Wallace, N.C. Hayes’ former teacher, Howard Boney, chartered a bus filled with residents of Wallace and nearby communities to support the production and their native daughter, Hayes. That same year, Dr. Kilimanjaro brought a group of theater students from N.C. A&T.

When Hayes auditioned for the lead role of Anna in Dignity, both Pat and Tom fell in love with her performance, but thought she was too young for the character. Lorey had seen Pat Battistini’s prior film Tin Can, and she was determined to work with him. She called back, said “hold up,” went to a wig shop and sent photos of her with different older looks. The rest is history.

Hayes says, “Shooting the film Dignity was the most wonderful, magical film experience I have ever been a part of. Everyone, from cast to crew, was kind, loving and flexible. We laughed, joked and enjoyed each other’s company. I am confident this ensemble work shows in the film, and I am so very proud to be a part of it.”
Dignity has won awards at festivals across the globe including the Skiptown Playhouse International Film Festival.

Wanting to repeat the experience she had with Dignity, Hayes reached out to Pat Battistini to help her produce The Dragonfly Tale, based on a full-length stage play written by Hayes and Robert (Bobby) Crear and once again produced by Voza Rivers and New Heritage Theater. Roscoe Orman and Pauletta Washington returned along with a stellar New York cast. Hayes says, “Pat helped me fashion our stage play into a short film that we are currently filming in Los Angeles.” The Dragonfly Tale is based on Crear’s life. Told from a child’s point of view, the plot is about a 9-year-old boy named June Bug, who is trying to have a normal childhood in a home “gone mad.”