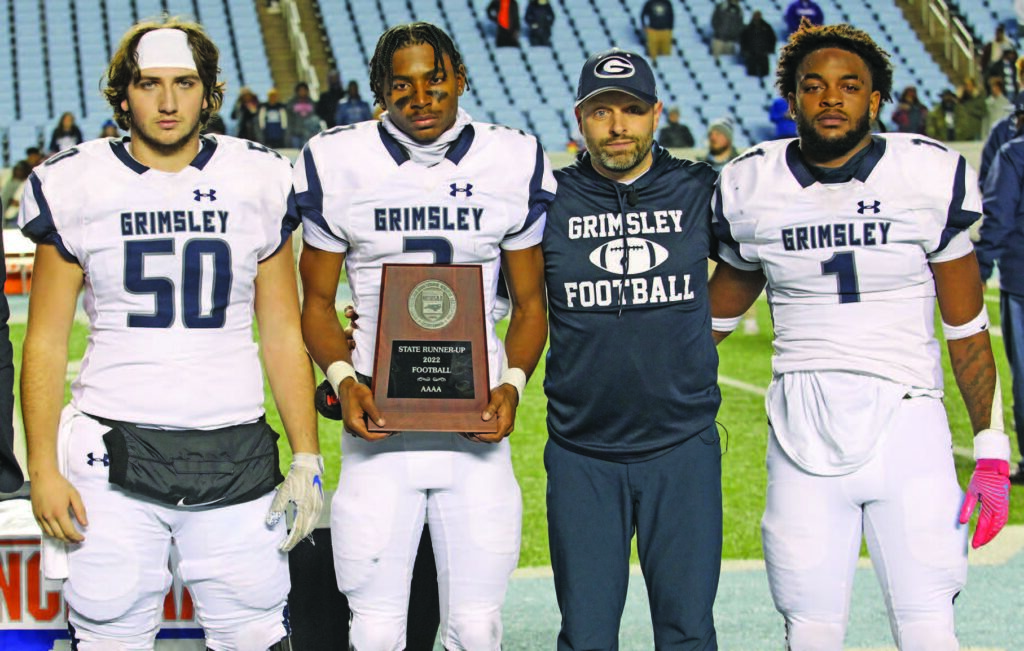 The New Bern defense stifled the Grimsley offense, holding the Whirlies’ explosive offense to just 257 yards of total offense and just 102 yards passing. Most of the Whirlies’ air attack came on an 85-yard touchdown pass hauled in by Terrell Anderson in the fourth quarter that cut the New Bern lead to 33-28 with just 2:57 to play. 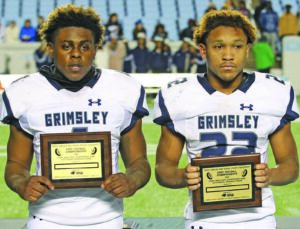 Grimsley sophomores Keshaun Jones (defensive back) and running back Mitchell Summers were selected the Most Outstanding Defensive and Offensive Players respectively for the Whirlies. Photo by Joe Daniels/Carolina Peacemaker.

No’Tavien Green, the Bears’ middle linebacker and leading tackler in the game, was selected as the game’s Most Valuable Player. Green had 8 tackles, one sack, a forced fumble and an interception that he returned 49 yards to set up the Bears’ second touchdown of the game. Florida State commit and fellow Bears defender K.J. Sampson was also impressive, earning 7.5 tackles and 1.5 tackles for loss in the game on his way to being selected as the Most Outstanding Defensive Player for New Bern.

New Bern broke the ice on their opening possession driving six plays and 59 yards in just 2:37. Chamir Wright powered the ball across the goal line from 22 yards out on a sweep to the left as the Bears regularly tested the edge of the Whirlies’ defense on the first drive. Grimsley did manage to block the PAT so the Whirlies only trailed 6-0 for their first possession of the night. But the first Whirlies’ drive was stopped by an interception by No’Tavien Green who returned the pick all the way to the Grimsley. An illegal block penalty moved the Bears back to the 31.

Aronne Herring made the Whirlies pay for the turnover, cashing in from 12 yards out to cap the short field drive and give New Bern a 13-0 lead with 3:54 to go in the first quarter. Herring finished the game with 161 yards rushing on just 16 carries with two scores on his way to being selected as the Most Outstanding Offensive Player for the Bears. Grimsley roared back quickly after Herring’s first touchdown as Terrell Anderson ripped off a 98-yard kick return touchdown to trim the New Bern lead back to six, 13-7.

The Whirlies surged in front for the first time early in the second quarter as Ryan Stephens stretched an outside lead into a 30-yard touchdown run and the Jackson Henry PAT put Grimsley in front 14-13 with 11:16 to go in the first half. Wright cashed in his second score of the night to put the Bears right back in the lead on the ensuing possession, capping a 6-play, 62-yard drive with a 4-yard touchdown run to go up 20-14 with 8:07 to go. 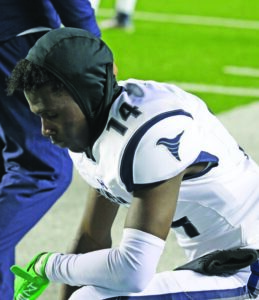 Grimsley senior Nick Caldwell (#14) sits on the sideline after the game. Photo by Joe Daniels/Carolina Peacemaker.

New Bern opened the second half scoring as well. After the Bears defense held Grimsley to a three-and-out on their first possession, Herring took a toss over the left side and sprung into the secondary, juking back to his right and taking it to the right pylon for a 66-yard touchdown to put the Bears up 27-14 with 9:35 to go.

After a Grimsley fumble deep in their own territory, New Bern drove down inside the 25 but on fourth and seven at the Grimsely 21, the Bears put the ball on the turf and Chris Young scooped it up to take it 35 yards to put the Whirlies in business at the Bears 36. Grimsley had to convert a fourth down on the drive, but eventually cashed in on a Mitchell Summers six-yard run that trimmed the Bears lead to 27-21 with 4:16 to go. Summers was the leading rusher in the game for the Whirlies, carrying 18 times for 71 yards and a score on his way to being selected as the Most Outstanding Offensive Player for Grimsley.

New Bern extended their lead to 12 on the first play of the fourth quarter. Damaree Tucker rushed for 23 yards and his only score of the night, slashing off left tackle to put the Bears up 33-21 after a PAT missed off the upright with 11:53 to play. He added another score in the closing minute, slashing through the right edge of the Whirlies’ defense 36 yards for the final score of the game to lift the Bears to the final 40-28 margin and put the game away.

Grimsley’s defense had a difficult time adjusting to the New Bern triple-option attack and the speed of the triple-option made their task much more difficult. The Whirlies’ defense was led by Keshaun Jones who finished the game with a team-leading 8 tackles on his way to earning Most Outstanding Defensive Player honors for Grimsley.

New Bern wrapped up an undefeated season, 16-0 and a perfect 6-0 in the Big Carolina 3A/4A where they won the league championship. The Bears appeared in their first State Championship since 2014, winning the program’s fourth State Championship Game. They earned their eighth regional title in school history.