NCCU spanks the Aggies for first time since 2016 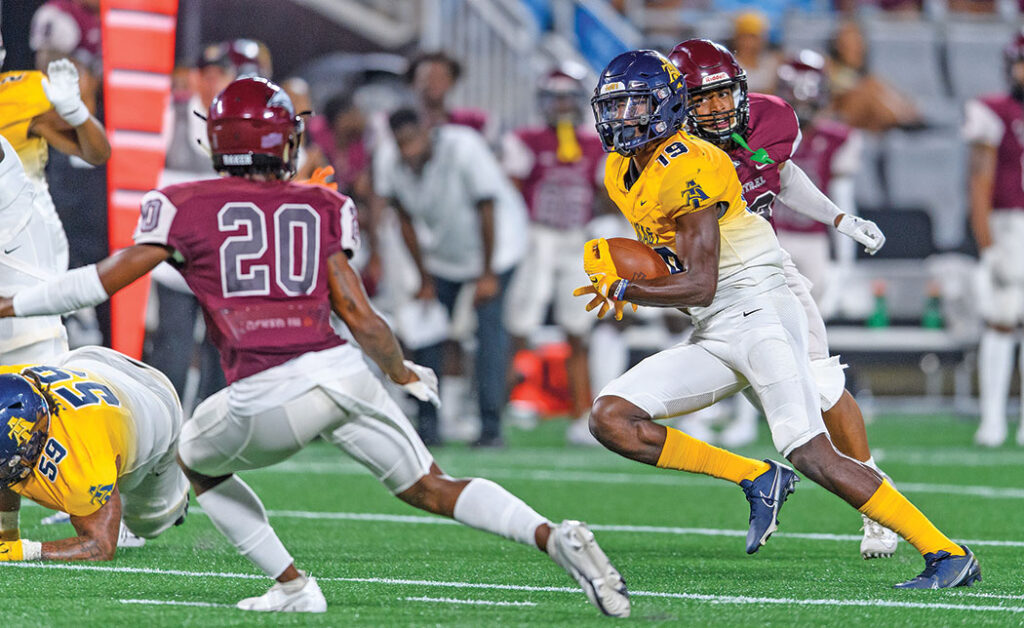 CHARLOTTE, N.C. − A freshman quarterback making his first career start in one of the longest and most heated rivalries in North Carolina and Black college football is challenging enough.

Throw in a blocked punt, an interception deep in the opponent’s territory, and a called-back touchdown, and the North Carolina A&T Aggies were on the wrong side of a 28-13 defeat to archrival North Carolina Central University (NCCU) on Saturday in the Duke’s Mayo Classic at Bank of America Stadium, home of the NFL’s Carolina Panthers. The Classic celebrated the 100th anniversary of the rivalry.

A&T freshman quarterback Zach Yeager (Minneapolis, Minn.) made his first career start on Saturday. He threw for 275 yards, a touchdown and an interception on 23-for-48 passing. He also ran the ball seven times for 66 yards.

“He was up and down. I thought he did a lot of good things, but he wasn’t productive,” said A&T coach Sam Washington. “He had good intentions but not enough results. You win and lose by points. We got down in the red zone several times and didn’t come up with points.”

One of Yeager’s ups was responding to a 12-play, 65-yard NCCU touchdown drive in the first quarter by tying the game at 7 with a 55-yard touchdown to Jamison Warren (Winston-Salem, N.C.) in the first. Yeager also completed an 18-yard pass and an 8-yard pass and benefited from a pass interference call on an 8-play 50-yard drive in the second quarter, making it a 14-10 ball game.

But NCCU’s offense executed well on third downs Saturday night. The Eagles were 6-for-8 on third down in the first half and 10-for-16 for the game. Things started looking up for the Aggies, however, when they stopped NCCU on a 3rd-and-10 with 2 1/2 minutes remaining in the first half to force a punt. The Aggies took over at their 21-yard line but went three-and-out. Then disaster came. Freshman Caleb Brickhouse (Elizabeth City, N.C.) had his punt blocked by Central’s Luke Bracey. Bracey recovered the block at the A&T 13, which led to a 1-yard run from Central quarterback Davius Richard to give NCCU a 21-10 lead.

“I thought that was a very significant play in the game,” said Washington. “You can’t give that up on special teams and give their offense that type of field position.”

After a good return from Taymon Cooke (Bluefield, Va.) on the kickoff, the Aggies had adequate field position at their 39.

After Yeager completed a 9-yard pass to Bhayshul Tuten (Paulsboro, N.J.), the Aggies benefited from two NCCU penalties on the same play, which advanced the ball 20 yards to the NCCU 32. Sophomore kicker Andrew Brown (Lexington, N.C.) made the Eagles pay by nailing a career-high 49-yard field goal just before halftime to cut the Eagles’ lead to 21-13.

The Eagles had the only score of the second half, a 16-yard completion from Davius Richard to E.J. Hicks with 4:36 remaining in the third quarter. But, from there, A&T had too many missed opportunities. Following a 31-yard completion to Zach Leslie (Lawndale, N.C.) that advanced the Aggies to the NCCU 19, Yeager tried to find Sterling Berkhalter (Cincinnati, Ohio) on a quick slant, but NCCU’s Khalil Baker jumped the route and picked off the pass to halt an Aggies scoring opportunity.

Yeager then led the Aggies on a 20-play, 75-yard drive that ended with an incomplete pass to Leslie on 4th-and-4 on the NCCU 6. Bhayshul Tuten then had a 36-yard touchdown run called back for holding. The Aggies eventually ran out of opportunities, allowing the Eagles to beat the Aggies for the first time since 2016.

NCCU could perhaps sympathize with the Aggies. Last season, they brought a young quarterback into the heated Aggie-Eagle rivalry in Richard. Like Yeager on Saturday, Richard had his struggles last season but showed tremendous potential. Fast forward a year, Richard commanded the Eagles’ offense to a tune of 200 yards passing, two touchdowns, and no interceptions on 20-for-32 passing. Richard also ran for two touchdowns.

“Well, that’s the guy. He makes plays,” said Washington. “It doesn’t even look [like] he’s throwing it hard or effectively at times, but he gets the ball where it needs to be, and that’s what matters. Again, it’s about being productive. They were productive tonight. We were not.”