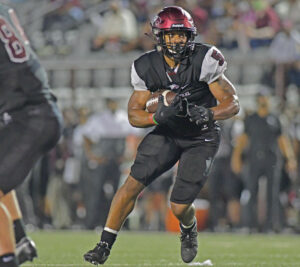 DURHAM – North Carolina Central University overcame a 10-point second-half deficit, powered by a pair of rushing touchdowns by Latrell Collier and a career-long field goal by Adrian Olivo, to defeat Winston-Salem State University, 20-13, in the Eagles’ home-opener inside O’Kelly-Riddick Stadium on Saturday night.

NCCU (2-1) tallied the only points in the first 15 minutes with a 30-yard field goal off the foot of Olivio with 51 seconds left in the first quarter.

WSSU (0-2) responded with field goals of 22 and 37 yards by Jobanni Esparza to provide the Rams with a 6-3 halftime lead.

After intermission the Rams added to their advantage with a 19-yard touchdown pass from Cameron Lewis to Antjuan Collins that capped a 72-yard drive to increase WSSU’s cushion to 13-3 at 10:48 of the third quarter.

A fumble recovery by NCCU defensive end Colby Warrior set the Eagles up for a 43-yard field goal, the longest of Olivo’s young career, to make it a one-score contest, 13-6 Rams, heading into the fourth quarter.

NCCU freshman quarterback Walker Harris completed all five pass attempts for 30 yards during an 80-yard drive the resulted in a 1-yard trip to the end zone by Collier and the extra-point kick by Olivo to even the score, 13-13, with 11:56 remaining.

After two defensive stops, NCCU got the ball back with 5:24 on the clock. In a drive that covered seven plays for 60 yards, Harris connected with receiver Ryan McDaniel for 24 crucial yards, while the other six plays were all runs by Collier. The last carry was a 2-yard touchdown surge for the game-winning score.

After trailing 13-3, NCCU’s defense did not allow the Rams to cross the Eagles 45-yard line in the final 25 minutes of the contest. Linebackers Noah Rainbow-Douglas and Cole Williams led the charge with 10 and eight tackles, respectively. Linemen Quantez Mansfield and Jessie Malit added six stops apiece, while Mansfield chalked up 2.0 hits for a loss and Malit recorded a solo sack.

In his first college action, starting quarterback Harris completed 16 of 26 passes for 134 yards, while adding 24 rushing yards. His favorite targets were Treveyon Pratt, who had six catches for 45 yards, and McDaniel with five receptions for 61 yards.

After improving to 2-1, NCCU makes the short trip to Greensboro this week to face the Aggies of North Carolina A&T on Sept. 25 at 6 p.m.