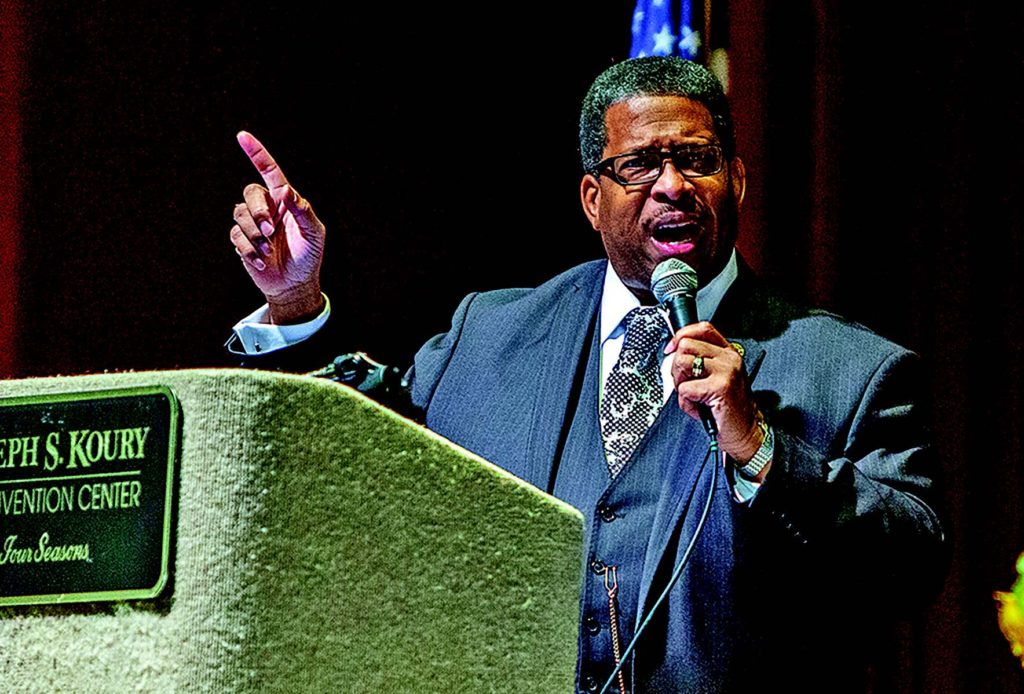 Reverend Dr. Leonzo Lynch delivered an inspirational message of self-reliance and resilience to Freedom Fund Banquet attendees. He is a Greensboro native, born at the old L. Richardson Memorial Hospital on Benbow Road in Greensboro and the brother of Loretta Lynch, former U.S. Attorney General during the Obama Administration. Photo by Ivan S. Cutler / Carolina Peacemaker

“Despite what was put on our back. We survived. Because we are the great people,” said Rev. Dr. Leonzo Lynch, senior pastor of Ebenezer Baptist Church in Charlotte, N.C.

President of the General Baptist State Convention of North Carolina, Lynch served as the keynote speaker for the NAACP Greensboro branch’s 54th Annual Freedom Fund Banquet at the Koury Convention Center on September 22.

Lynch noted that although technology and society has advanced, there is still a disconnect between people. He encouraged people to work together across generational lines, but each group has something to contribute.

“We have to get unity amongst ourselves. We have to call a truce between the generations. There’s a disconnect between the Civil Rights generation and the Millennial generation. That rests within communities,” said Lynch. “We have to learn how to respect our differences.”

This year’s banquet theme was, “When we fight…we win,” and Lynch reminded banquet attendees that August 20, 2019 marked exactly 400 years to the day that slavery began in America. He then pointed to the Black Church as a source of strength for the African American community.

“When we came to America as slaves we accepted the White man’s version of Christianity, but we took it and filtered it through our own Black experience. We took a cold religion and restored to its’ apostolic spirituality. We took that hate and turned it into love,” said Lynch.

He added, “They used the Bible to beat us over our heads, but we took it off of our heads, and put it on our hearts to set our people free. Through the Black Church we’ve made more progress than we ever would have without it.”

He also referred to the Book of Joshua,17:14, and compared the great people of Joseph to the struggles African Americans have faced in this country since they were brought to America.

“This is a story of a war. A conquest,” said Lynch. “Here we are, on our conquest. Up from slavery. Up through reconstruction where we made some advancements and lost some advancements. Up through the Civil Rights movement, we stood up and declared the constitution is not a lie, we are created equal. Here we are in 2019, still crying out for more justice, housing, healthcare and jobs.”

He told people not to depend on the crippled American education system that was never designed to educate African Americans. “We have to teach our own folk.”

In a country where the ideals do not match the reality of living, Lynch said that African Americans are a great people who can conquer anything.

The Corporate Humanitarian Award recipient was Food Lion for their contributions to the community.