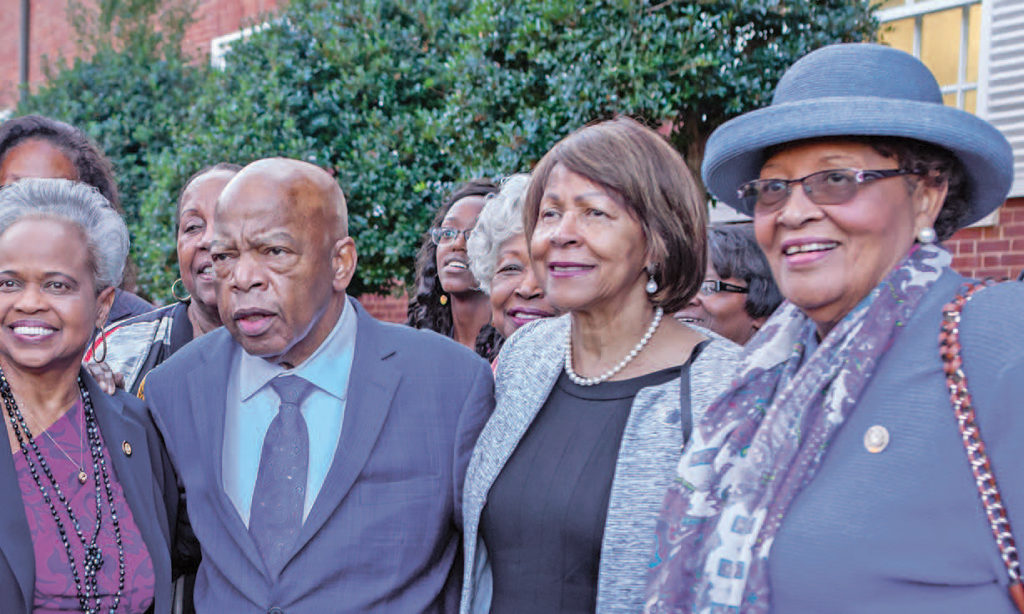 “…[T]hey’re going to help redeem the soul of this nation….and maybe even save the planet.”

Those were some of the last public words uttered by Congressman John Lewis (D-GA-5) a month ago during a joint town hall video with former Pres. Barack Obama during the peaceful demonstrations inspired by the death of George Floyd.

The appearance was Rep. Lewis’ heartfelt expression of respect to today’s generation of freedom fighters, who he felt emulated the same level of courage and commitment he displayed as a young disciple of civil rights leader Dr. Martin Luther King Jr. during the turbulent 1960’s civil rights movement.

On Friday, July 17th, Congressman John Lewis, 80, died. He had been suffering for several months from stage 4 pancreatic cancer. He had represented Georgia’s Fifth Congressional District for more than thirty years.

Among the tributes from leaders the world over, were many from his friends and colleagues here in North Carolina – a state the Alabama native had a deep love and respect for.

“Congressman John Lewis was a hero whose lessons will echo for generations to come,” said Gov. Roy Cooper in a statement. “Let’s all honor him by working to live up to his example.”

Congressman Lewis was also very close with former Atlanta Mayor Bill Campbell, who was the first Black student to integrate the old Raleigh Public School System. The two were colleagues on the Atlanta City Council during the 1980s.

Rev. Dr. William Barber, president of Repairers of the Breach, and co-convener of the Poor People’s Campaign: A National Call for a Moral Revival, said, “John Lewis challenged everyone, including [Dr. Martin Luther King Jr.] and other elders in the Movement, through his unflinching commitment to freedom now. We cannot honor him without redoubling our efforts to revive this democracy.”

Rev. Barber had a message for Republicans who are expressing sorrow for the great civil rights champion.

“Congress, if you truly want to honor John Lewis, pass an omnibus bill that includes living wages, voting rights, and universal healthcare. As the Bible says in Matthew 23, don’t just love the tombs of the prophet but truly love him and honor him by doing what he did all of his life.”

America has lost its greatest living hero. Everything John Lewis did was in the service of Justice,” said Congresswoman Alma Adams (D-NC-12). “It was an honor to make ‘good trouble’ with John in the House, and I will miss my friend. My prayers are with his family and every seeker of justice who mourns him today.

“Courage, conviction, the “Conscience of Congress. Congressman John Lewis was an American hero who epitomized the true spirit of the Civil Rights Movement,” said Butterfield of his friend in a statement. “From the streets of Selma to the Halls of Congress, an original Freedom Rider and a forever freedom fighter, John Lewis dedicated his life to the cause of justice and equality and will always be remembered for his humility and strength. His fervent passion and fearless conviction will forever be a reminder to never be afraid of getting into ‘good trouble’ for a good cause. John R. Lewis was a dear friend, and he will be deeply missed, but never forgotten. He now belongs to the ages.”

Fourth District Congressman David Price, another close friend of Rep. Lewis, said, “Congressman John Lewis’ remarkable life — rising from the Jim Crow South to courageous leadership in the Civil Rights movement to his service in the halls of Congress — is a uniquely American story, as he often said. But his love of our country was expressed in his lifelong determination that it redeem its failures and live up to its democratic promise. His moral clarity in the face of injustice harnessed the power of everyday people to demand equality in the eyes of the law, a fair chance at a better life, and inclusion in the “beloved community.”

However, prominent Democrats in Congress challenged Republicans to truly honor Rep. Lewis by passing restoration of the 1965 Voting Rights Act, which was passed by the Democrat-controlled U.S. House, but has been sitting on Republican Senate Majority Leader Mitch McConnell’s (R-KY). desk without action.

“There’s very little tangible evidence of this whole voter-suppression nonsense that the Democrats are promoting,” McConnell told the Wall Street Journal just last week..
N.C. Chief Justice Cherie Beasley knew Congressman Lewis, and respected his work as a young civil rights activist, leader of the Shaw University-born Student Nonviolent Coordinating Committee, and later congressman representing the Atlanta district..
“We must continue their work,” she told WRAL-TV, also acknowledging the death of another disciple of Dr. King during the ’60’s movement, Rev. C.T. Vivian, who died the day before Lewis.