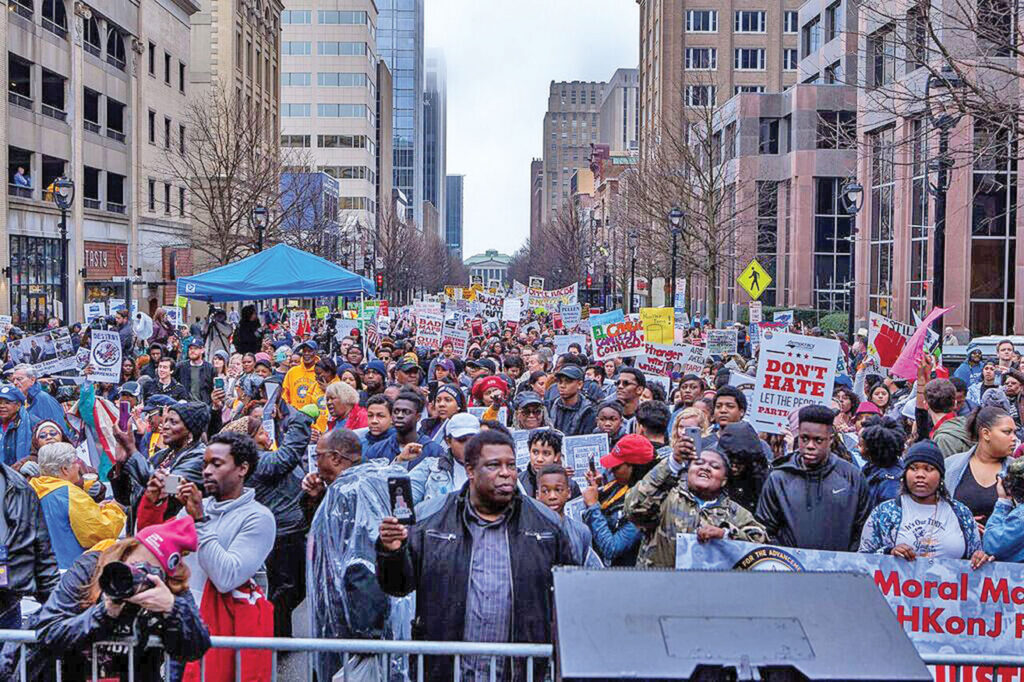 RALEIGH – With the theme, ‘Taking Resistance to the Ballot Box,” the 12th Annual Moral March/Historic Thousands on Jones Street People’s Assembly in Raleigh Feb. 10 attracted thousands of demonstrators from across the state despite heavy rains. With protest signs castigating everything from the Trump Administration, to North Carolina’s legislative Republican leadership, the extraordinarily diverse crowd of young, old, Black, White, Hispanic, straight, gay and others, marched through downtown Raleigh from Shaw University to just outside the state Capital.

There they heard from a plethora of speakers, representing the unique coalitions involved, all imploring those gathered to make sure their voices, and votes, are heard come November for the midterm election.

Bishop Dr. William Barber, the former president of the N.C. NAACP, spoke to those gathered by phone, urging them to indeed turn out the vote, regardless of whatever barriers or restrictions are thrown at them.

But the highlight of the event were the pointed remarks of the N.C. NAACP’s new president, Reverend Dr. T. Anthony Spearman of Greensboro, who used biblical analogies to illustrate the need for justice, and invoked inspiration from civil rights leader Dr. Martin Luther King Jr. to crystallize the societal evils that the N.C. NAACP leader said must be confronted.

“Moral Resistance is the means we use to dismantle the engines of destruction that drive us away from the mainlands of democracy while steering us toward the mountains of fascism,” Rev. Spearman offered in a prepared speech.

Spearman said the three “…engines of destruction…” were “R.I.P.” – “racism, impoverishment and persecution.”

“The antidote to racism is representation,” he continued. “Each human on this earth represents a spark of divinity. Representation begins with recognizing that every person has an equal spark of God within them. Representation is the reconstruction we seek when we resist racism at the ballot box.”

“Investment in our justice system is not only ensuring access to counsel and reconstructing our bail system so that it is not a poor tax. Investment in our justice system means reconstructing the administrative process so that someone who needs a protective order from an abusive ex-spouse doesn’t have to take two days off work to sit in the back of a courtroom waiting to be heard for ten minutes.”

“Investment is the reconstruction we seek when we resist impoverishment at the ballot box.”

Lastly, Dr. Spearman warned about militarism, which he called “persecution.”

“Peace is the reconstruction we seek when we resist persecution at the ballot box.”

Rev. Spearman called on NAACP members and coalition partners to “…take your resistance to the ballot box…” per the 2018 midterm elections, and ultimately the 2020 presidential election.

“In the buildings which line Jones Street, the men who cloak themselves with smiling faces by day and in white sheets by night have returned, and they are lynching our democracy,” he charged, adding, “This unconstitutional General Assembly on Jones Street is what the KKK looks like in the 21st Century.”