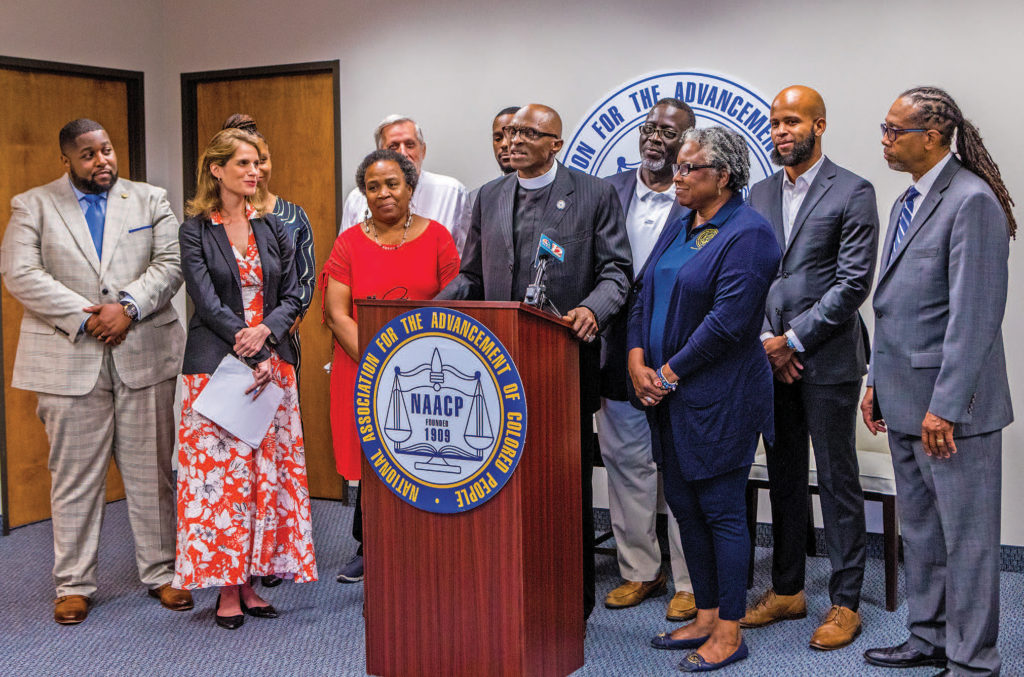 North Carolina NAACP representatives and lawyers from Forward Justice held a press conference in Greensboro on Tuesday to outline a broad strategy to speak with new and longtime voters and, specifically, college students, the elderly and any person who could face reasonable obstacles to securing proper photo identification.

The N.C. NAACP is calling for all voters to participate in a “Season of Democracy” in 2019 special and municipal elections, emphasizing that no photo voter ID will be required to vote in this year’s elections.

“We are ready for a Season of Democracy. The much needed spring that follows the long season of voter suppression that was wrought on our state by extremists who cheated their way to power,” said N.C. NAACP president, Rev. T. Anthony Spearman.

Spearman shared that voter suppression tactics against people of color precedes the 2013 Voter ID law and goes back to before the Voting Rights Act of 1965 when there were poll taxes and literacy tests in place to hinder the African American vote. He added that voter ID laws have a history of disproportionately disenfranchising Black voters — especially elderly citizens, who may not have received a birth certificate.

Since then, changes were made to the 2018 voter ID legislation that allows for school IDs to use photos submitted by the student and the State Board of Elections is now required to establish a schedule for submissions and approvals. It is also required to produce an approved list of colleges, universities, state or local government entities and charter schools every two years.

Rev. Spearman cited concerns that the elderly, aged 65 and older, may have difficulties if they possess an expired driver’s license with no intention of renewing it, or do not have a birth certificate. Other people who could experience difficulties obtaining proper photo identification include home bound residents, persons with limited language proficiency and new North Carolina residents, all of whom would require absentee ballots.

A voter ID requirement was first introduced in 2013. In 2016, the U.S. Court of Appeals for the Fourth Circuit ruled that the measure “target[ed] African Americans with almost surgical precision [and was] enacted with racially discriminatory intent.”

Caitlin Swain, co-director of Forward Justice noted that the N.C. State Board of Elections only found one case of in-person voter fraud after the 2016 election. Leading the N.C. NAACP’s legal team, Forward Justice is a Durham-based law, policy, and strategy center dedicated to promoting racial, social and economic justice.

“These irregularities in voting are vanishingly rare,” said Swain. “The court found that the General Assembly was imposing cures for a problem that did not exist. There has never been a demonstrated need for voter identification in North Carolina.”

The federal lawsuit was filed in the Middle District Courts of NC. The lawsuit challenges SB 824 under Section 2 of the Voting Rights Act, both as the results of the law and the intent under which the law was passed. The lawsuit also says the voter ID law violates the 14th and 15th Amendments of the U.S. Constitution.

Voter ID will go into effect for the March 2020 Presidential primary elections, which is expected to have a large voter turnout. The 2019 Municipal Elections will not require photo ID.

“Do not be deterred or confused. There is no photo ID requirement in 2019. You do not need a photo voter ID in order to register to vote,” said Spearman. “Your voice matters, your vote matters. Get out and let your voices be heard.”

Individuals who have concerns about the new voter ID requirement or have a story about difficulties created by this new requirement, may call the N.C. NAACP voter suppression hotline at 1-877-880-VOTE (8683).