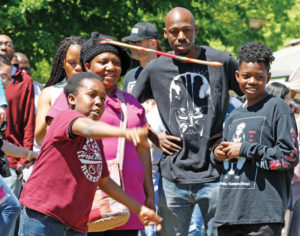 Hundreds of people flocked to Center City Park in downtown Greensboro on Saturday, April 27 to celebrate and learn about Korean culture at the 2019 North Carolina Korean Festival.

Hosted by the Korean-American Association of Greater Greensboro, from 10 a.m. to 5 p.m., the park was full of people enjoying music, Korean games, art activities and performances by drum groups and dances by fan dancers in traditional and modern Korean costumes.

The festival also featured K-Pop, a genre of popular music originating in South Korea, with a dance competition that showcased more than a dozen acts and concluded with a crowd participation dance. Korean artwork, T-shirts and K-pop paraphernalia were also available for purchase.