A top North Carolina civil rights attorney warns that the recent displays of high-powered weapons by angry Whites during demonstrations – even here in North Carolina – are a harbinger of deadly things to come, and African Americans should be paying very close attention. 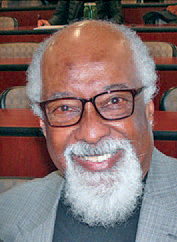 Joyner should know. He was the vice chair of North Carolina’s 1898 Wilmington Race Riot Commission twenty years ago, which studied the tragic events when angry White supremacists attacked Black citizens in the Port City, killing many, and driving others out of town, all the while violently taking over the city’s government.

With a close, but informed eye towards history, Prof. Joyner says, “Since the election of President Barack Obama, governmental reports show a significant increase in Whites purchasing guns, many of them are assault caliber weapons, in this country. Those purchases have increased with the election of Donald Trump and much of this purchasing increase has involved members of right-wing, conservative and White racist organizations. There has also been a significant increase in the number of these groups and their efforts to recruit other Whites to join their racist movement and activities.”

Joyner continues, “Examples of the presence and boldness of these groups were present in the several heavily armed demonstrations conducted in North Carolina to demand the re-opening of the economy and the increasing presence of self-proclaimed racist and patriotic groups who mobilized to monitor African American demonstrations to protest police misconduct under the claim that they are protecting property or confederate monuments. White individuals have invaded churches where African Americans have been killed and have acted as private law enforcers to apprehend African Americans who they wrongly suspect or claim are engaged in criminal activities.”

“The common targets of these groups and activities are those activities in which African Americans are engaged to protest against oppressive conditions which they and other African Americans find themselves. The signs of escalating and emboldened racial antagonisms are present all over the country and these racist groups and individuals are becoming more visible as Donald Trump has regularly complimented and encouraged them to come out to protect his claim to the presidency.”

A quick scan of the recent record proves Joyner’s points.

It is well documented by FBI data that gun sales in the United Sates exploded between 2009 and 2013, with more than 65 million background checks conducted. It is safe to assume that the majority of those gun sales were by Whites.

Since the COVID-19 pandemic, gun sales have surged across the country and here in North Carolina since March, according to The Charlotte Observer. The Guardian has reported an increase of White nationalist hate groups by 55 percent in the Trump era.

In August 2017, America got a taste of White nationalist violence in Charlottesville, Va. during the clash between anti-hate demonstrators and right-wing White nationalists. Pres, Trump infamously said there were “fine people on both sides.”

Here is North Carolina, when the ReOpen N.C. demonstrators went to Raleigh several months ago to demand that Gov. Cooper remove his COVID-19 restrictions so that small businesses could reopen, many of those predominately White demonstrators displayed semi-automatic weapons. Several of them were even photographed in a Raleigh Subway sandwich shop carrying them.

And thanks to rhetoric from Pres. Trump, armed White militias are showing up at several peaceful demonstrations since the death of George Floyd, antagonizing unarmed protestors. A 17-year old boy in Illinois is charged with the shooting deaths of two people during demonstrations after the police shooting of a Black man in Kenosha, Wisconsin.

Finally, given that the presidential elections now less than 50 days away, Trump has said that if he loses his supporters would take to the streets in violent reaction.

Given attorney Joyner’s dire warning and the confirming evidence, the question is, what should African Americans do now?