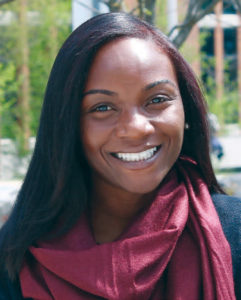 “Let us salute Dr. Kizzmekia Corbett for her role in developing this vaccine,” posted Rev. Dr. T. Anthony Spearman, president of the N.C. NAACP, to his Facebook page Monday.

In case anyone seeing Dr. Spearman’s post wasn’t clear on who he was referring to, it was the notable revelation that a Black female immunologist at the National Institutes of Health (NIH), who graduated from Orange High School in Hillsborough, and then UNC at Chapel Hill years later, was one of the leading researchers to unlock the mystery of the vaccine that now protects the world against the novel coronavirus.

“Kizzy is an African American scientist who is right at the forefront of the development of the vaccine,” said Dr. Anthony Fauci, the nation’s top infectious disease expert, after being questioned at a forum by the National Urban League.

“So, the first thing you might want to say to my African American brothers and sisters is that the vaccine that you’re going to be taking was developed by an African American woman,” Dr. Fauci concluded.

Indeed, Dr. Corbett is one of the leading viral immunologists and research fellows at NIH, who worked on the Moderna vaccine, which, according to the emergency use authorization from the Food and Drug Administration (FDA), is 94 percent effective in preventing both illness and infection from COVID-19, which has presently claimed over 300,000 American lives, and infected more than 15 million people across the nation.

The Moderna vaccine is expected to be distributed in the U.S. by Friday.

It is a crowning achievement for what was once a young, gifted Black high school genius in the American Chemical Society’s Project SEED summer internship program at UNC-Chapel Hill. While other young people hung out or went to the beach for the summer, Corbett spent hers in laboratories, eventually earning an internship at the NIH.

She credits a scientist Al Russell, with being her mentor.

“Al was a Black man,” she once wrote. “At such an impressionable age, seeing, through him, that becoming a scientist was an attainable goal was what stood out to me the most. This left me with an understanding of the necessity of visible representation in underserved communities, and the realization that one’s approach to mentorship is equally as important as (or arguably more important than) their approach to scientific discovery. Al planted a seed that summer by taking time away from his experiments to mentor me. Now it is my purpose to resow those seeds in the youth who are the future of science.”

Dr. Corbett enrolled in a doctorate program at UNC-CH, and it was there that she chose to study viral infections, ultimately earning a Ph.D. in microbiology and immunology. Corbett joined the NIH’s Vaccine Research Center, and ultimately Dr. Fauci’s team, as a postdoctoral fellow in 2014.

When the first indications that a serious viral infection from China had the potential to be widespread earlier this year, Corbett knew that she had to be part of the effort to develop an effective vaccine as soon as possible.

And she also knew that as an African American scientist, it was important that she be visible in that effort, to help inspire up-and-coming Black scientists.

“As I trek through my scientific career,” Dr. Corbett recently wrote for the online magazine Nature Medicine, “… making novel discoveries, climbing what seems to be a never-ending ladder, I am reminded of my other duties…to mentor…to be visible…to represent.”