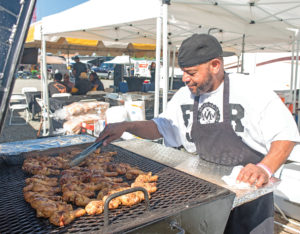 After a week of concerts, comedy shows, class reunions and a winning football game, another Greatest Homecoming On Earth (GHOE) has wrapped up.

North Carolina Agricultural and Technical State University celebrated its annual Homecoming with a week of activities (October 20 to October 27), filled with food, laughter and recalling old memories while making new ones.

Affectionally called GHOE by many, Homecoming brings thousands of visitors to the city and has been known to generate more than $32 million in tourist revenue. Students, faculty, alumni and friends of the university gathered on the campus throughout the week to fellowship, more specific, to visit the Greek plots. Food and merchandise vendors were also set up around the city throughout the week, including more than 100 vendors at the annual Aggie Fanfest that spanned homecoming weekend.

Although a new route was announced for the annual Homecoming Parade, it didn’t stop hundreds of people from lining the Greensboro streets early Saturday morning before the big game. In addition to university parade participants and floats, local dance troupes, community organizations, middle and high school bands also joined the parade festivities, showing off their GHOE spirit.

Early estimates are that there were more than 21,500 people at the sold out football game on Saturday, including those who tailgated outside the packed sporting event. N.C. A&T’s Golden Delight dance team showcased their best moves to the sounds of the A&T Blue and Gold Marching Machine, while the A&T cheerleading squad kept the crowd energized. The collective spirit throughout the week remained joyful in Aggieland as the football team won their game, beating Howard University 64-6, making this year its ninth consecutive Homecoming victory.