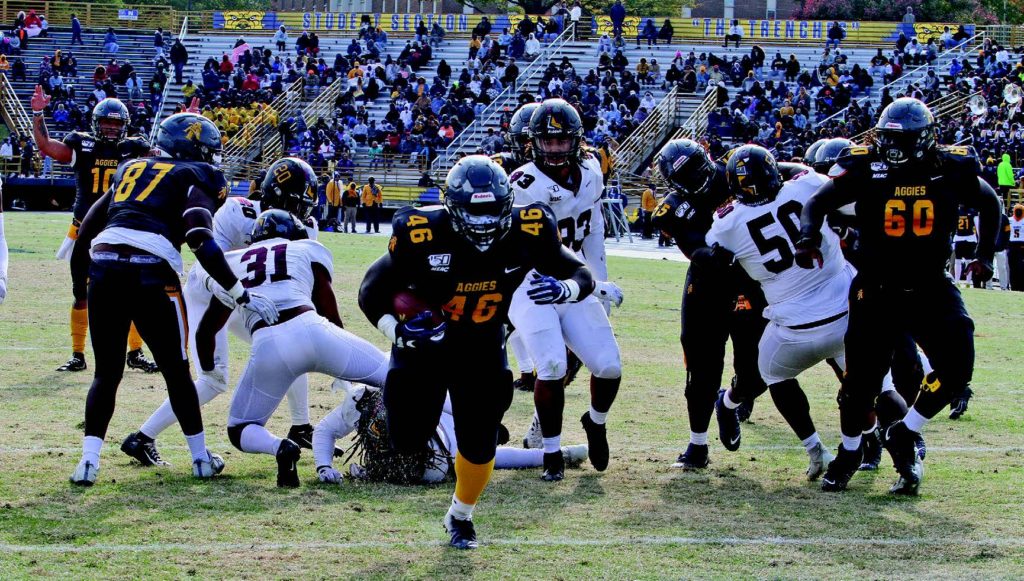 As another memorable regular season draws to a close, the A&T football team finds itself near a destination it has sought from the very beginning.

Win one more game and they can start making reservations for Atlanta.

That’s the scenario they’ll face this weekend when the Aggies square off against their archrival North Carolina Central with a chance to claim a share of the Mideastern Athletic Conference title and earn an unprecedented fourth trip to the Air Force Reserve Celebration Bowl. 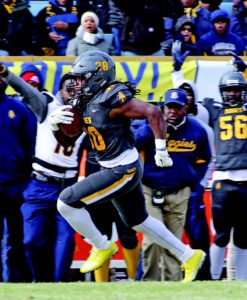 Jah-Maine Martin (#30), a junior running back, heads to the end zone. Martin led the Aggies with three touchdowns in their win over Bethune-Cookman last Saturday at BB&T Stadium. Photo by Joe Daniels / Carolina Peacemaker

“We control our own destiny,” said A&T coach Sam Washington, who led his team to the 2018 HBCU national title in his first season after taking over for legendary coach Rod Broadway. “The Celebration Bowl is the ultimate goal. That’s why we started playing this game in the summer, started preparing to get back to Atlanta. And here is the opportunity we’ve presented to ourselves. It’s very important we go ahead and finish the deal.”

Kickoff is set for noon on Saturday at BB&T Stadium and the A&T sports marketing department has already designated this game as a “gold out.” A&T fans are being encouraged to come dressed in gold attire and the football team will be wearing its all-gold uniforms.

The stakes were just as high last weekend when A&T enjoyed an impressive 47-17 rout of Bethune-Cookman in what was a battle of first place teams. Just seven days after suffering an embarrassing road to defeat to Morgan State on Nov. 9, A&T returned home and enjoyed one of its most complete performances of the season, dominating the Wildcats in all three phases of the game.

A&T racked up 430 yards in total offense, including a whopping 300 yards on the ground. Junior running back Jah-Maine Martin finished with a game-high 120 yards rushing and three touchdowns, including a 66-yard scamper on the opening drive that gave A&T an early 7-0 lead.

Also making big contributions on the ground was senior running back Kashon Baker, who came in off the bench and recorded more than a 100 yards in combined offense and two touchdowns.
With the win, the now No. 24 ranked Aggies have an 7-3 overall record and are tied for first place in the MEAC with a 5-2 mark. Since A&T owns the head-to-head tiebreaker over 5-2 South Carolina State, a victory this weekend will mean yet another Celebration Bowl berth.

A&T has never lost when playing in the Celebration Bowl, taking home titles in 2015, 2017 and 2018. This year’s event will be held on December 21 at Mercedes-Benz Stadium, the home of the Atlanta Falcons.

“I don’t have to get our guys hyped up,” said Washington. “They know exactly what this game means. And not just because it’s Central. It’s also the ticket to Atlanta.

And if Saturday’s contest didn’t already carry enough significance, it will also be the final home game for over 20 A&T seniors including All-MEAC wide receiver Elijah Bell.

Bell, who is wrapping up one of the best football careers in A&T history, already holds the school record for touchdown catches (28), receiving yards (2,607) and total receptions (180),
Last week against the Wildcats, he overcame flu-like symptoms earlier in the week to finish with four catches for 61 yards and a touchdown.

Defensively, A&T was led against Bethune by sophomore linebacker Joseph Stuckey who had six tackles, a sack and recovered a fumble in the first quarter that set up the Aggies second touchdown.
And while A&T hopes to conclude their season-long journey by obtaining the ultimate prize, for North Carolina Central (4-7 overall, 3-4 MEAC) this year has been one of growing pains and hardships.

The Eagles’ season began with an ugly 41-10 road loss to Austin Peay, in a game where Central’s defense surrendered 563 yards of total offense. The very next day, junior quarterback Chauncey Caldwell announced on social media that he was leaving the team and entering the transfer portal.

Currently, the Eagles have dropped four of their last six games and are coming off a 24-0 loss to SCSU last Saturday in their home finale.

One could look at that score and question just how much fight this Central team has left, but you are quickly reminded that this is a heated rivalry game where records and stats go out the window.

The Eagles would love nothing more than to ruin A&T’s postseason plans, and of course no one has forgotten the 45-0 beat down Central suffered last year in Durham.

During his introductory press conference, first year Central head coach Trei Oliver vowed that his program would not suffer an embarrassing defeat like that to A&T this year.
“Be careful what you guarantee,” said Washington with a smile when he was informed of Oliver’s declaration.