It is the one court ruling North Carolina Republicans dreaded to hear.

Approximately 56,000 ex-felons statewide are now, as of July 27th, eligible to register to vote, says the N.C. Court of Appeals and N.C. Board of Elections, starting with this November’s midterm elections. That means a 1973 law that essentially made ex-felons jump through a lot of unnecessary hoops to return to citizenship with all of their rights intact, is for now, null and void.

So whether an ex-felon is on parole, probation, or post-release supervision, as long as there is no longer an active prison sentence to be served, is at least 18 years old, has resided in North Carolina for a minimum of 30 days before the election, and is a U.S. citizen, he can now run down to the local board of elections and sign up to vote.

Why are Republicans not pleased with this ruling? Because the very last thing they want is more Black and Hispanic people able to vote across the state, especially after doing everything else from redistricting to passing voter ID laws to limit who can vote, who can’t and how many.

Blacks are 21 percent of North Carolina’s population, but reportedly 42 percent of the 56,000 ex-felons now able to register to vote. 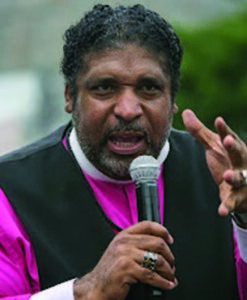 Those 56,000 can now join North Carolina’s 7.3 million other registered voters in casting their ballots, providing margins for possible Democratic victories Republicans had not counted during this contentious midterm season. The races up for grabs include for the U.S. Senate and the State Supreme Court, in addition to the N.C. legislature and congressional seats.

The GOP argued for upholding a 1973 law that Democrats now say disenfranchised ex-felons by forcing them to earn their rights of citizenship back upon fulfilling certain requirements at the end of their prison sentences.

Republicans argued that that 1973 law was proper and constitutional.

Lawyers for the plaintiffs argued that law was racist.

Interestingly, the Democrat-led N.C. Supreme Court is scheduled to hear the case upon GOP appeal, even though the Appellate Court ruling seems pretty ironclad. No date had been set at press time.

It all started when a Superior Court judicial panel struck down the 1973 law last March per a lawsuit, ruling that it violated the North Carolina Constitution because it discriminated against African Americans.

But the state Appellate Court then stepped in and prevented ex-felons from registering to vote until July 27th.

Last Wednesday, during an “Unlock Our Vote” celebration near the state legislature, ex-felons were urged to immediately register to vote so they could be now heard.

Meanwhile last week, the N.C. Supreme Court, by a 4-3 ruling, agreed to speed up proceedings dealing with the Common Cause lawsuit against legislative redistricting maps ratified last February.