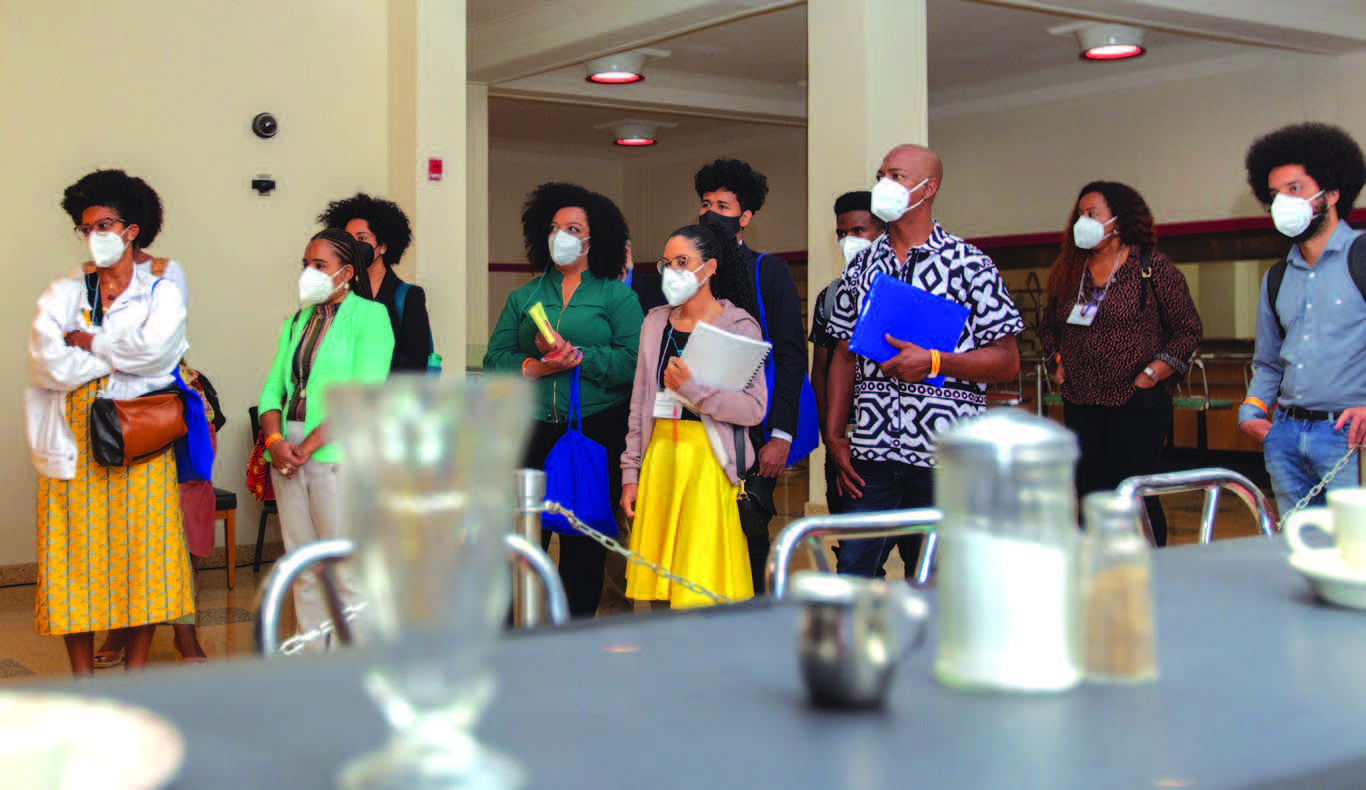 Black journalists from Brazil visit the iconic F.W. Woolworth lunch counter, site of the launch of the lunch counter sit-in movement by The A&T Four, at the International Civil Rights Center and Museum in Greensboro. Photo by Ivan Saul Cutler/Carolina Peacemaker.

Several cultural and educational groups arrived in Greensboro on Monday, June 20 to visit the International Civil Rights Museum and Center as part of the observance of the new federal holiday, Juneteenth. While the groups were all different, the goal to learn about social justice and the Civil Rights Movement in the South was the same.

N.C. Global Leadership, a U.S. Department of State International Visitor Leadership Program, hosted a group of Afro-Brazilian journalists, who toured the museum during their visit to the state. N.C. Global Leadership brings together local experts and community volunteers with emerging global leaders that have been selected by the U.S. Department of State. This year’s program is entitled “Promoting Diversity and Inclusion in Journalism: A Project for Brazil.” Black Brazilian journalists were invited to the U.S. to talk to researchers and other journalists, particularly in Black media, and visit spaces that help them further understand Black history in the U.S.

In addition to the museum, the Brazilian contingent attended a few Juneteenth activities and interacted with local residents at in-home events hosted by community members. 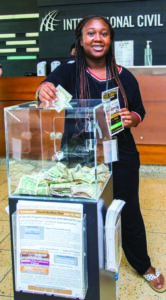 Dr. Bianca Santana, Ph.D. in Information Science and executive director of Casa Sueli Carneiro explained that in Brazil, although there were never any defining laws on segregation, like in the U.S., it has always been evident in cultural practices.

“Seeing how the archives here are organized, it’s very inspiring. It is often difficult to talk about racism in Brazil because many people argue that it doesn’t exist because we were different from the U.S. and not legally segregated. The kinds of images here in the museum don’t exist in Brazil. It was not necessary to have signs to tell people somewhere isn’t their place. People knew that it was not their place. Everyone knows the codes,” said Santana.

In the American south, Jim Crow referred to any of the laws that required the separation of Whites from “persons of color” in public spaces such as transportation, schools, employment and touched every part of life. While public facilities in the South openly displayed signs that stated, “No Coloreds,” Santana noted that it was not openly displayed in the same way in Brazil.
“In Brazil, we identify as Black or Afro-Brazilian. It’s not based on bloodlines or DNA – if you look White, you are White, if you look Black, you are Black,” she said. “In theory, we are equal and everyone has the same rights, but in practice, this is not true. People who have no access to education, housing or healthcare are the Black people in Brazil.”

Racial classification in Brazilian society over the years has been considered often inconsistent and is influenced by a myriad of factors including class, status, education, location and physical appearance. For example, a light-skinned multiracial person who held an important, well-paying position in society may be considered White, while someone else with the same ethno genetic make-up who had darker skin or was of a lower class may be considered Black or Brown.

The African slave trade was not reserved for the United States alone, and according to historians, Brazil was the last country in the western hemisphere to abolish slavery in 1888. By the end of the Slave Trade in 1850, it is estimated that the Portuguese-led Brazilian colony had imported more than five million slaves from Africa, the largest number of any other country in the Americas and seven times more than what was imported to the United States.

After the museum tour, the journalists gathered for a short discussion on how the story of slavery and racism parallels the African American struggle for equality in the United States. Much like the U.S., slavery in Brazil encouraged the dehumanization of Africans and a multitude of negative stereotypes that set the stage for a racial hierarchy in Brazil where Blacks and those of African descent would become the subservient class to Whites.

Despite the similarities of racism and discrimination between the United States and Brazil, the demographic makeup of these two nations is vastly different. Roughly 55 percent of Brazil’s population identifies as Black or mixed race, while approximately 12 percent of Americans identify as Black.

“What I observed is that there is a deep pain in the exhibits. A deep pain that we all share in the Diaspora,” said Santana.

The museum also welcomed high school students traveling with the Teaching Artist Institute under the YMCA of Central Maryland. Titled “Freedom Rides USA,” the group is following an eight-day, 10 state journey across the South, similar to that of the 1960s Freedom Riders. Greensboro, N.C. was the second stop on the tour.

The original Freedom Riders were groups of White and African American civil rights activists who participated in organized bus trips through the American South in 1961 to protest segregated bus terminals.

Makaia Armstead, a senior from Mergenthaler Vocational-Technical High School in Baltimore, MD., noted that the museum helped her understand the history more than just sitting in class.
“This made me relate to the history in a new way. These people were brave. Some of them were high school students just like us. And the fact that so much happened right here in Greensboro to change the way things were. They saw that things weren’t right and they did something about it,” she said.

Both groups also visited North Carolina A&T State University following the museum tour, where the students had at a lunch and learn at the Alumni Events Center and the journalists met with students and professors in A&T’s Department of Journalism and Mass Communication.