Much Needed Superhero: Local teacher steps in to aid in PPE shortage 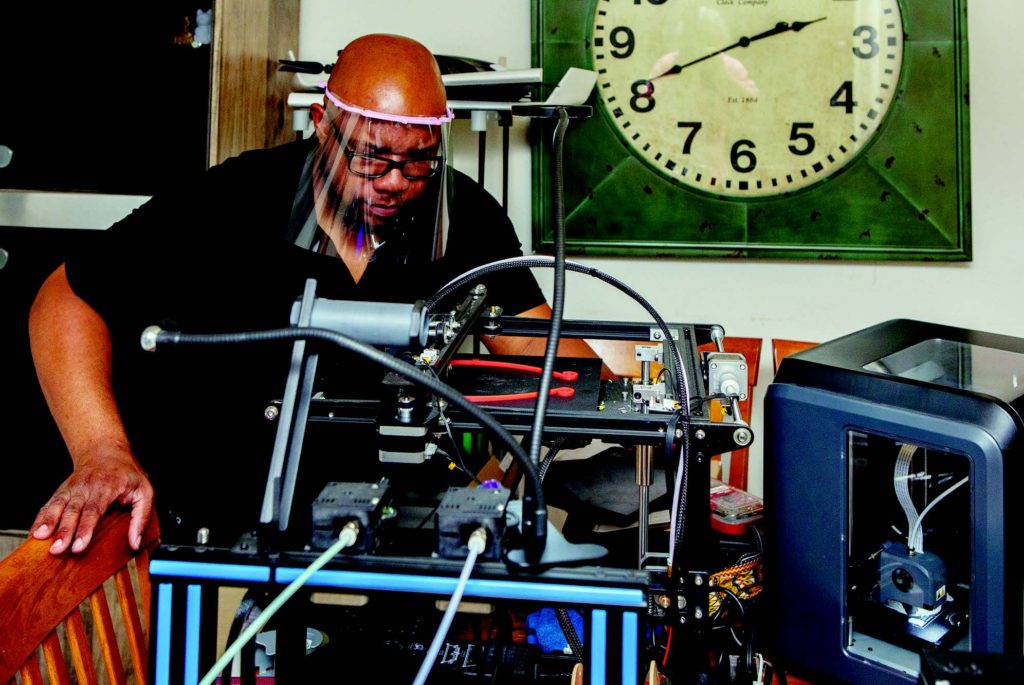 Out of his Greensboro home Donald Sweeper has put his engineering skills to good use by using his 3D printers to make personal protective equipment in the form of face shields for health care workers.
Photo by Ivan S. Cutler/Carolina Peacemaker.

Donald Sweeper is showing his students what real-world application looks like beyond the walls of the classroom.

“Emerging technologies is 3D printing, building drones, robotics, coding and virtual reality. That’s the type of stuff I teach in the classroom,” he said. “I still have all of the teaching duties. My lesson and modules are online, and work is still being graded.”

But with classes being virtual these days due to the social distancing mandates and the COVID-19 virus, from his home Sweeper has put his engineering skills to good use and has begun using his 3D printers to make personal protective equipment in the form of face shields for health care workers.

He said that he would hear and see a lot of different ways through YouTube, different magazines and emails about how those in the industry could assist those in the health care industry.

“I’m a maker. I like to build with my hands. There’s this call for makers to help fill the gap for PPE’s for health care workers. I tried to do the masks first, but it took too long. So, I found where I could fit in which was doing the face shields,” Sweeper said.

When he began creating the masks roughly four weeks ago, Sweeper did so with his wife in mind, who works as a registered nurse at a dialysis center. At the time, her facility had enough PPE’s but since then she has begun wearing a face shield. He said his primary focus was on much of the smaller medical practices because they are often overlooked.

To date, Sweeper has delivered or shipped face shields across the Piedmont Triad and Triangle areas of North Carolina, South Carolina and Texas including Moses Cone, The Midwifery Center in Durham, a dentist office in Sedgefield, just to name a few.

“I usually deliver them but when I have to mail them off, the customer has to assemble them when they get it. I don’t charge shipping.”

Sweeper has registered on the U.S. Department of Health and Human Services – National Institutes of Health website as someone willing to use their 3D printers to help print face shields, so the demand he has put on his machines has increased. The process to make one mask takes roughly 45 minutes.

“I found a particular face shield design that I was comfortable with that doesn’t take a long time or use a lot of 3D printing filament, uploaded it to my printer, made sure my settings were correct and it then prints the file,” Sweeper explained. “It takes about 40 minutes for it to be completed. Once the headband part is done then I get transparencies, hole punch them and clip them on the headband part.”

He is asking for donations to help cover the cost of the printing and delivery. The average donation to make and deliver one face shield is estimated at $10. A GoFundMe has been set up to help offset the cost of making the shields. So far, the campaign has raised $2,683 of its $5,000 goal.

“I have a total of four machines but I’m down to one because the other three have broken trying to keep up with the demand,” Sweeper said. “But I have a particular set of skills and it’s a way to help others right now when the demand is so great.”

He admits that he never expected it to grow this fast or go this far. So much so that his three sons help him keep his printer going while he sleeps.

“I knew the demand was great, but I didn’t think that I would connect to as many people as I have,” Sweeper said. “It’s been crazy, but I just do as much as I can. I don’t try and overwork myself. What we’re doing is demanded by everyone in the world right now.”

To donate to Sweeper’s Face Shield GoFundMe campaign visit: https://www.gofundme.com/f/1mnnfdvyyo. To order or learn more about the face shields, visit Sweeper’s website at www.sweepworx.com or email him at sweeperd@gmail.com.

Chanel Davis is a superhero freelance writer in her own right with the Carolina Peacemaker. She is based in High Point, N.C.