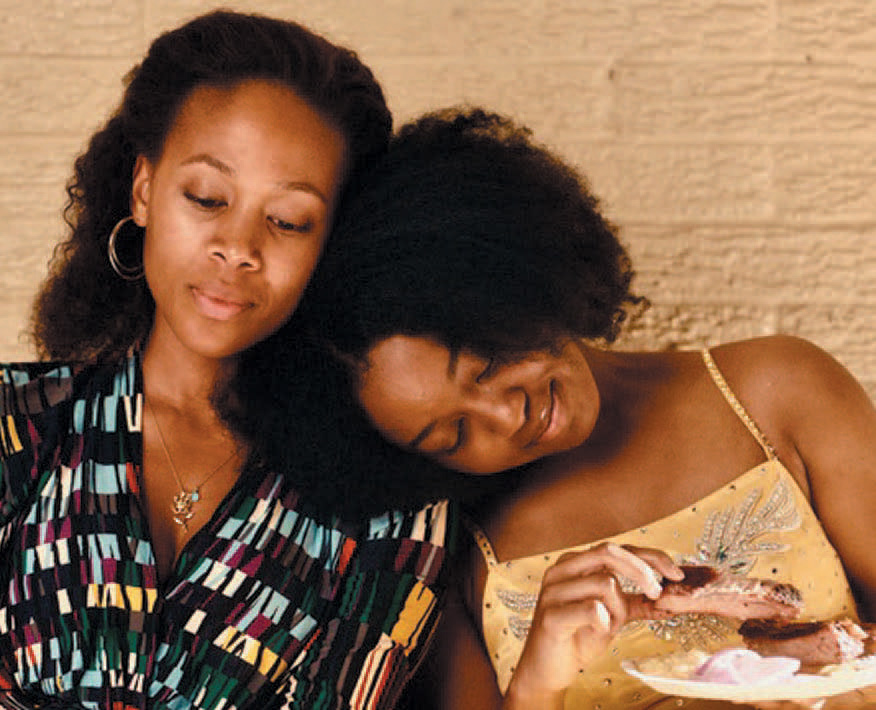 Turquoise Johnson portrayed by actor Nicole Beharie (left) is a single mom to her daughter Kai played by Alexis Chikaeze in this drama about life and renewal.

A small Black neighborhood in the Fort Worth, Texas metro area. A former teenage beauty queen whose opportunities never panned out. It’s a microcosm. A blip on the radar. Just big enough to provide strong underpinnings for an earnest character-driven story.

Juneteenth, aka Freedom Day, Jubilee Day or the Black Fourth of July, is an American holiday that dates back to June 19, 1865. The Emancipation Proclamation officially ended slavery on January 1, 1863, but Texas didn’t follow suit for two and a half years. These days, Juneteenth is celebrated across the south, but has a particularly strong meaning in The Lone Star State.

The holiday’s traditional celebrations had a lasting effect on writer/director Channing Godfrey Peoples. As a kid she marveled at her local Miss Juneteenth contest in Fort Worth. Now she shares that experience in the form of a very, stripped-down, bare-boned filmmaking style that pulls you into a simple everyday existence that also feels like a trap.

In her day, she was a beauty—poised, mannered and elegant. When Turquoise Johnson (Nicole Beharie, American Violet and 42) won her Miss Juneteenth title as a high school student, hope and prosperity seemed around the corner. So why is it umpteen years later she’s a single mom, working the bar at Wayman’s BBQ & Lounge, trying to raise her teenage daughter Kai (Alexis Chikaeze) and still messing around with her baby-daddy Ronnie (Kendrick Sampson, The Vampire Diaries and How to Get Away with Murder), a player who’s constantly one step away from jail?

Turquoise still has that barely containable desire, but she’s playing it out through Kai. She pushes her reluctant offspring into the same contest that became her beginning and end. And as she does, the overworked mom doesn’t look forward to having the same stewards who run the contest and once shaded her, dismissing her daughter too. So why persist? She wants Kai to benefit from the same opportunities she bungled, especially a college scholarship.

For years young women have used pageants as a way to elevate their lives, finance educations, network and start careers. Those aspirations drive the protagonists in this very humbling folktale. Lives that peaked in high school. Dreams deferred. Living through children. Parental abuse. Emotional scars from old adversaries. Fresh wounds too. As Turquoise works at Wayman’s lounge, she hears words that remind her of her dilemma: “I will never get over seeing Miss Juneteenth cleaning toilets.” Turquoise’s inner demons are just accessible enough for audiences to want to see her regain some dignity. That’s the mark of a sound script: a very fundamental concept, viable characters and strong writing.

To Channing Godfrey Peoples’ credit, her homegrown, no-frills style is compelling. As a USC film grad who has been mentored by director Charles Burnett (To Sleep with Anger, Killer of Sheep), viewers can see her reverence for Burnett’s penchant for telling simple stories in the most sparse ways. Methodically, Peoples, with a touch of John Cassavetes’ stark realism, pulls you into a very evocative time and place.

Although the film’s direction and script give the proceedings a strong core, both elements needed a boost. More dynamics: Mother and daughter disagree, but the intensity of their feuding does not rise high enough. Mother and grandmother argue, yet something about their relationship seems contrived. Also, the love triangle between Turquoise, the no-good boyfriend and the attentive mortician (Akron Watson, Empire) needed to be more tense and raw.

The slow deliberate pacing (editor Courtney Ware), drab sets (production design Olivia Peebles) and meagerly furnished rooms (set decorators Dani Broom-Peltz and Jonathan Rudak) do their job. The great thing about Daniel Patterson’s cinematography is that the lighting is simple, nothing too fancy. The bad thing is that camera angles are often too awkward. While Emily Rice’s musical score strikes the right chord. Nicole Beharie carries the weight of the film. Tiny, determined, conflicted. Hurt immeasurably but still determined. Beharie knows how to convey all that through dialogue, facial expressions, movement, actions and glances. She gives viewers a complete portrait of Turquoise. Kendrick Sampson as the Romeo who talks a good game but rarely delivers, captures all the nuances necessary to make audiences want to wring Ronnie’s neck.

The struggles teens face every day are well exhibited by Alexis Chikaeze, with her perfect blend of innocence and a drive for independence. Lori Hayes as the volatile grandma, Marcus M. Mauldin as the lounge owner Wayman, Liz Mikel (TV’s Friday Night Lights) as a fellow waitress and Akron Watson as the funeral parlor director round out a formidable supporting cast.

Some will feel that the beauty pageant premise is a bit old-fashioned for these modern times. Others may enjoy this look at small-town Texas where Black cowboys go on dates using their horses as chariots. There are numerous elements that will cause debate and start conversations.

Certainly, Channing Godfrey Peoples has created a film about second chances that will make viewers eager to see if this young strong-minded woman prevails. Turquoise: “I’m going to make sure she is something we ain’t. She’s my dream now.”