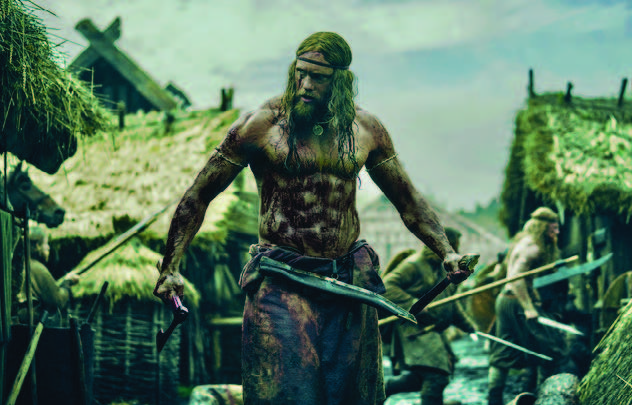 Alexander Skarsgård in The Northman. Photo by by New Regency Productions.

Hell hath no fury like a Nordic prince wronged. That’s the premise of this 10th century Scandinavian revenge allegory. Deceit, murder and vengeance rain down in torrents.

Once upon a time, King Rørik of Denmark appointed two brothers, Horwedil and Fengo, as the rulers of the peninsula of Jutland. Horwedil slayed the King of Norway, he married Rørik’s daughter Gerthua and the couple had a son named Amleth. That’s according to the Icelandic legend of Prince Amleth, an Old Norse tale that inspired Shakespeare’s Hamlet. That folklore inspired the very well researched and written script by director/writer Robert Eggers (The Lighthouse) and Icelandic poet, novelist, lyricist and screenwriter Sjón (Lamb, Dancer in the Dark). Their saga starts as two brothers reunite.

King Aurvandil War-Raven (Ethan Hawke, Training Day) has just returned from war to his wife Queen Gudrún (Nicole Kidman, Being the Ricardos) and tween son Amleth (Oscar Novak). As the father prepares his son the prince to transition into adulthood, the king’s sibling Fjölnir The Brotherless (Claes Bang, The Square) comes home too. In short order, the jealous Fjölnir kills Aurvandil, steals his wife and tries to murder the son, who escapes. 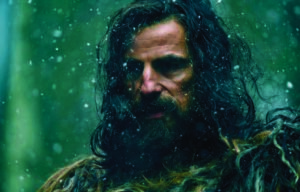 Claes Bang co-stars in The Northman.

Years later, in exile, the adult Amleth (Alexander Skarsgärd, Passing) is a Viking warrior, and alongside his lover Olga (Anya Taylor-Joy, The Queen’s Gambit), he hunts down his venomous uncle, who now lives in Iceland. The boy turned man seethes: “I will avenge you, father. I will save you, mother. I will kill you, Fjölnir.” His lover Olga pledges her allegiance: “Your strength breaks men’s bones. I have the cunning to break their minds.”

This ultra-cruel parable is of biblical proportions. Hard not to want to see Amleth complete his mission. Tough to watch a young man waste his life filled with so much hate. Yet that is the fuel he and the narrative burns. In-between heads getting chopped off (an over-used device), men being speared, women abused and enough debauchery to shame Game of Thrones, some viewers may wonder who the hell directed this. There is nothing cheesy, generic, B-movie or lackluster in the entire production, from a technical or artistic standpoint. How did a Viking story become a work of art?

Costume designer Linda Muir should applaud herself for making the clothes look filthy dirty. The score (Robin Carolan and Sebastian Gainsborough), with loud pounding drums, crescendos at the right times and the only musical hiccup are two eccentric Björk performances. For 2h and 16m, scenes are cut with exacting precision (editor Louise Ford). Lots of Egger’s tech crew worked on The Lighthouse, and he should keep them in his employ indefinitely—even if he has to give them pension plans to do so.

Egger forgoes a completely literal adaptation, and instead adds supernatural images of mythology, sorcery and witchery. Bodies float in air, a mysterious seeress foretells the future and wild dogs howl in unison. Yet you never question this extra dimension, even with its Native American-like overtones, because it elevates the storytelling. This ethereal, spiritual realm counteracts the dark realistic savagery on earth. Violence is power. Instincts are primal. The language is gruff; all that comes across in the battles, interactions, threats, perils and animalistic behavior. Through it all, Egger pulls excellent performances from his cast, maintains a steady forceful tone and drives the storylines to a cataclysmic ending. Try as you may, you can’t take your eyes off the screen.

It’s like Hawke, Kidman, Bang, Skarsgärd and Taylor-Joy showed up to do Hamlet at the Old Vic and were kidnapped and cast into this movie instead. Their acting is very theatrical, of the highest standards and permeates their characters, making this searing act/ad/dra epic stick to your gut. But even this impressive quintet must render star billing to Iceland’s beautiful scene-stealing geography. Panoramas of verdant valleys, ash gray volcanoes, bright orange lava and white glaciers are so photogenic, it’s like they’re movie stars.

The brutal, aggressive rage is real. It’s a wrath that will propel the aggrieved prince and conniving uncle to the fiery gates of hell, a futile place where audiences will do the postmortem. Was the legend that spawned Hamlet worthy? Hell yes.