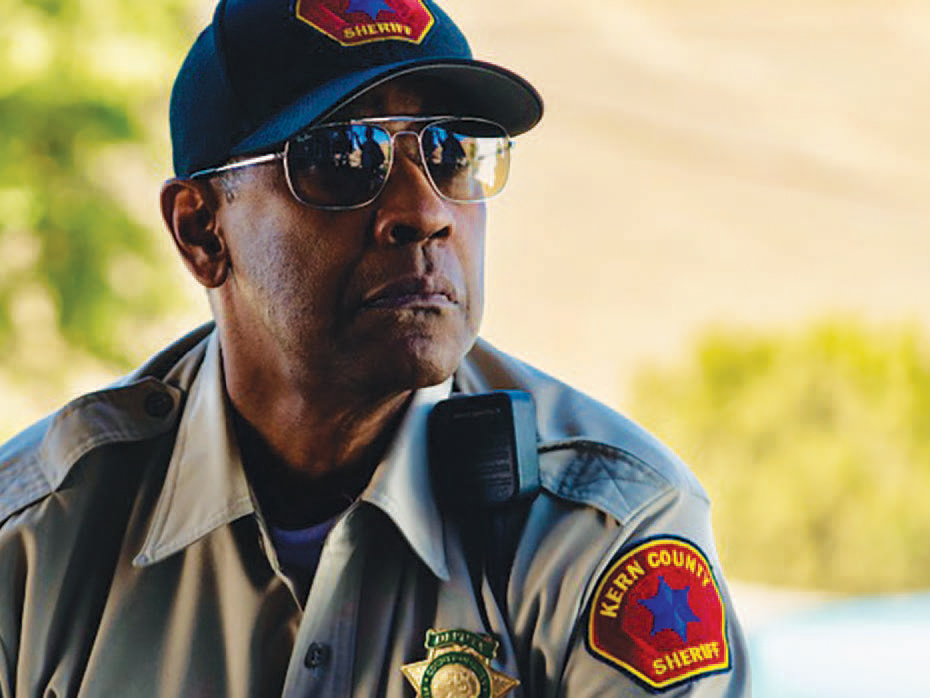 A young blonde woman drives down a deserted California highway at night, alone. A mysterious car drives alongside her, passing, then stopping in the middle of the road. She freaks. She’s scared. The big car and her sedan play cat and mouse. Terrified, she drives to a closed motel looking for help. No one is there. No one hears her cries for help. She runs. A man hunts her, weapon in hand. Could he be the serial killer that’s paralyzing Los Angeles and confounding the LAPD?

That’s the dire setup for this 2h 7 min crime/drama/thriller, a film that doesn’t break new ground and fails to invent an innovative, distinguishable or memorable murder spree. Yet within the confines of the genre, it nails basic elements enough to keep crime fans engaged until its reveal-after-reveal-after-reveal ending. Theatergoers may get restless, but HBO Max streaming viewers will be content.

Writer/director John Lee Hancock (The Highwayman, The Blind Side) wrote the script 30 years ago, hence the 1990 time period, the old cars and clothes. Influenced by buddy cop movies of the era, Hancock teams up two disparate officers of the law who are eager to stop the grisly murders of young women by a homicidal maniac. Layers and layers of missed opportunities and close calls augment that premise. The killer looks smart, elusive. The cops look committed but floundering.

As a director Hancock is not in a rush. There is very little action, car chases don’t break the speed limit and if you’re looking for exciting fight scenes, it’s not that kind of party. He gives the lead actors room to explore their characters, toy with each other, savor the tangy dialogue and establish their identities. Tension grows as they get mired in head games and confounding dilemmas during their search for that big breakthrough.

In the fall of 1990, Sheriff’s Deputy Joe “Deke” Deacon (Denzel Washington) leaves Kern County, in Central Valley California, headed to Los Angeles to retrieve bloody boots, evidence for a trial. As he walks into an L.A. police station, some greet him, some look askance. That’s what happens when you return to your old workplace after leaving under murky circumstances.

The 60ish and gray-haired Deke butts heads with a press-hungry young Homicide Detective Jim Baxter (Rami Malek, Bohemian Rhapsody). The upstart is in the midst of having Deke’s truck towed, as it’s blocking his car. It’s an awkward introduction. The detective is trying to solve a string of murders, and his efforts are going nowhere. When he learns laconic, confidant Deke was once a successful gumshoe in the department and involved in a similar case years ago, he cozies up to him. The old guy and young apprentice unite, digging, surveilling, interrogating and deducing. Evidence leads them to appliance repairman Albert Sparma (Jared Leto, Dallas Buyer’s Club). He’s a long-haired, tall skinny man with buggy eyes. Looks like a weasel, thinks like a fox. Is it him?

The growing bond between Baxter and Deke exposes key differences: 1.) Experience: At a crime scene young Jim tries to school his elder: “Things have changed a lot since you left.” Deke: “Still gotta catch him right?” 2.) Approach: Baxter questions Deke’s intimidating methods: “Your old pal (a crook under investigation) said you broke his jaw.” Deke: “Gotta kiss a lot of frogs to catch your prince.” 3.) Lifestyle: One is a lively young family man. The other is estranged from his relations.

It looks like Washington finds great pleasure creating the Deke character, molding its persona and slowly revealing a history filled with mystery and regret. Grimaces, inflections, head turns and cagy smiles… It’s all a calculated effort by a great actor to bare every inch of Deke for his audience. He does it with a craftsmanship that is nearly unmatched. Leto makes a mercurial and scary suspect. Never overdoes it. Just temptingly evil enough, while Malek plays the needy investigator in a more understated way, never matching the masterful, thoughtful interpretations rendered by Washington and Leto. The supporting actors, from Natalie Morales, Terry Kinney and Chris Bauer to the very focused Michael Hyatt, play off the leads appropriately.

Highway scenes, and there are plenty, have hints of David Lynch as shot by cinematographer John Schwartzman (Seabiscuit). Production design by Michael Corenblith (The Blind Side) creates a ‘90s aura, but why are so many rooms and hallways green? Why do interrogation rooms and crime scenes look like obvious sets? The clothes, courtesy of costume designer Daniel Orlandi (The Blind Side), wisely blend in and don’t stand out. Editor Robert Frazen (The Founder) knows when to trim. And yes Thomas Newman’s (1917) musical score adds atmosphere, but the playlist leans too heavily on obvious songs. Etta James’s “At Last” is not the only mesmerizing tune in her arsenal. Pick another.

Yes there are convoluted moments in this police story and missed opportunities: Deke going for coffee just as Sparma sizes up Baxter and invites him for a ride in his shiny crabgrass green Chevy: “Come on in, what are you scared of?” Threats from a commanding officer that the detective could be pulled off the case by the Feds have a tinny ring. One of the pursuers getting flummoxed and adhering to commands no cop would follow, is nonsensical. And why not give the serial killer a catchy name? It did wonders for the “Zodiac Killer” and “Son of Sam.”

There are scenes that will be etched in viewers’ minds indefinitely. Most are in the fairly astonishing finale, when it looks like the hunter could be captured by the game. That’s when a flurry of evocative images, surprising twists and deceptive performances make this whodunit better than ordinary. Better, but never extraordinary.
In select theaters and on HBO Max.