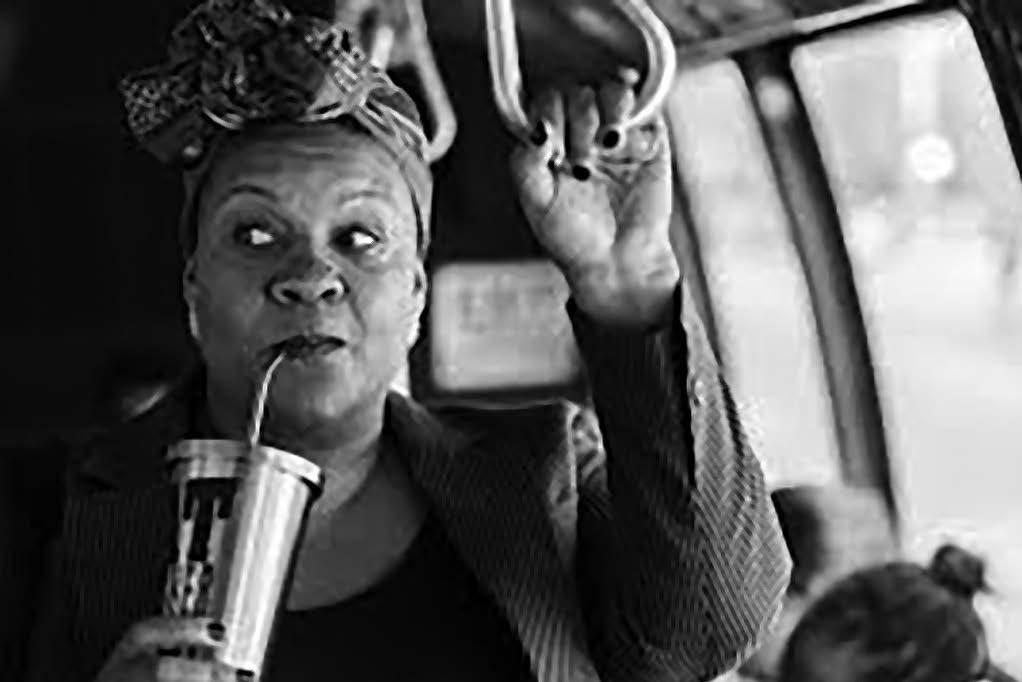 Forty. Something about that age puts people on a precipice. Too old to be young. Too young to be old. And if your career hasn’t taken off by that age…well. Will it ever? This is the space where The Forty-Year-Old Version resides. A crossroads.

Radha Blank, a Harlem-based writer, is known for her NEA Award-winning plays (SEED), TV writing credits (Empire) and producing and writing TV shows (She’s Gotta Have It). Her side job? Sister Radha moonlights as a hip-hop comedy rapper. If her eclectic resume intrigues you, so will this semi-autobiographical film. And the story goes…

At the prime age of 40, playwright Radha Blank thinks she should be a bit further along in her profession. The reality is, she’s teaching theater to students at a Harlem high school and hoping her agent and childhood friend Archie (Peter Y. Kim, TV’s After Forever) can get her theater piece, Harlem Ave., staged by a creepy lecherous producer (Reed Birney, TV’s Titans). That’s where she’s at.

She has another ambition: becoming a respected rap artist. As “RadhaMUSprime,” she struggles to find her way in the hip-hop world, but uses this experience as a meditation, a vessel for channeling her feelings. She gets a big assist from a young producer named D (Oswin Benjamin), who admires her talent as much as her soul. Yeah, it’s like that.

Blank, as the writer, director and central character exhibits a sage, urbane and self-deprecating persona that is simply irresistible. As the frustrated writer/performer finds her way, there are more than enough obstacles on her path to make her journey worth the trip. When one particularly bitter student, Elaine (Imani Lewis, TV’s Star), chides her for her failures you feel bad for her. When Radha blows a rap debut at a club, your heart breaks. When she wonders if her upcoming play is selling out her values as an artist, you understand her ambivalence. It’s like nothing is going her way—unless she takes command. People in their forties who are facing a midlife crisis will relate on a very deep level. Others will connect too.

Blank’s script is peppered with hip kids, love interests, demons, detractors and odd characters. The most curious is a homeless man, Lamont (Jacob Ming-Trent, Watchman), who loiters outside her apartment relieving himself on the street and verbally abusing passersby. He’s the kind of irritant that drives New Yorkers crazy. He’s also a one-man Greek chorus who watches and comments as his fortysomething neighbor faces career, friendship, love life, age, race and gender-related issues.

The dialogue is appropriate for all the different characters from a brassy Latinx neighbor, to the kids who challenge her, the White directors/producers who just don’t’ get her and the younger lover who could be her savior. And Blank has some good lines too: “It beats the mother of invention. I’m sucking on her sweet tit.”

The main storyline has enough diversions and vectors to keep audiences interested in Blank and her narrative for about 90 minutes. However, the black and white footage goes on for 2h 9 min. At some point you’ll wish editor (Robert Grigsby Wilson) had cut out around 10 meandering minutes.

Fortunately, the beguiling atmosphere Blank creates makes up for the film’s girth. The movie’s hip contemporary playlist is fun (music supervisor Guy Routte). The film’s look, from production design (Valeria De Felice, Night Comes On), art direction (Katie Fleming, Night Comes On) and the clothes everyone struts (costume designer Sarah Williams), thoroughly reflect the city, its vibe and inhabitants. It’s like a cool urban playland has been caught in motion (cinematographer Eric Branco, Clemency), making the filming of Radha’s stomping ground as alluring as a travelogue.

As a director, Blank’s style is somewhat reminiscent of Sidney Lumet’s. She takes a part of the city, builds a drama-sphere and plays it out with a stable consistent tone. Her comedy has a neurotic campiness too, like early Woody Allen films. The drama evokes a cinema verité style, the kind that John Cassavetes and Spike Lee favor.

Blank pulls the most natural performances from the young actors: Haskiri Velazquez (TV’s The Birch) as the bold lesbian student, Imani Lewis as Radha’s nemesis, with Antonio Ortiz (Vox Lux) and T.J. Atoms (Hulu’s Wu-Tang: An American Saga) as Blank’s most ardent pupils. They’re all so animated they deserve their own show. Ditto the hip-hop folks—from D the romantic to the fierce women who dig into each other in the Bronx rap battle night dubbed “Queen of the Ring.” A smart producer would sign them up for a late-night cable show or streaming series.

As for Blank’s acting? Her comedic thespian instincts are pretty sharp. When she just curls her face, wrinkles her nose or gives that stink eye, she says more in a glance than a page of dialogue. Her timing is impeccable. Her antics can be as broad as Vivian Vance and Lucille Ball on the old I Love Lucy TV series or as nuanced as Loretta Devine on The Carmichael Show. Don’t be surprised if this movie spawns a cable series too.

As the film winds down, a horn section plays a moody, heady mixture of soul and jazz music. It’s an entrancing effect, one that will captivate audiences as they watch a vulnerable but resilient forty-year-old find her own voice.