These colors are so trippy—and even the trees are cool.” Sixteen-year-old Ethan (Jaboukie Young-White) voices the obvious. It’s what viewers will think upon seeing the wondrous visuals in this heartwarming ani/adv/fan/fam tale.

Director Don Hall (Raya and the Last Dragon) and co-director/writer Qui Nguyen (writer on Raya and the Last Dragon) have magically created a netherworld that’s hard to pinpoint. It’s in the vein of a 19th century Jules Verne novel (Journey to the Center of the Earth), yet it’s a unique universe. One where odd creatures, human-like plants and a host of hard-to-describe beings perplex the central characters as much as the audience. Using CGI with computer and 3d animation of the highest quality, the filmmakers take viewers to a strange new world.

Searcher Clade (Jake Gyllenhaal) is a very humble farmer who lives in Avalonia. He’s well respected by townsfolk for discovering “Pando,” a plant/power base that Avalonians subsist on. He’s the son of legendary, hippy-Viking-looking explorer Jaeger Clade (Dennis Quaid), who vanished 25 years ago while on an expedition. Life is calm for Searcher and his wife Meridien (Gabrielle Union) and their rambunctious son Ethan. 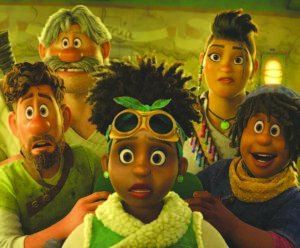 Then one day, the mayor, Callisto Mal (Lucy Liu), urgently needs the farmer’s help. Something is endangering Pando, their life source. They must travel to the heart of the problem and solve it quickly if Avalonia is to survive.

This dangerous mission carries the toons over hill, over dale and into unchartered territory they could not fathom. Watching them weather crashes, run from evil weird organisms and face extinction makes 1h 42m whirl by. In the most thoughtful ways, Nguyen’s very progressive script focuses on saving the planet themes that will resonate with young audiences.

The second emphasis is on normalizing very modern issues in everyday ways. The Clades are an interracial couple, one of the characters has a gay crush, there’s a dog with three legs and mom drives an airship. For some, this approach will seem “woke.” For many, these plot devices simply mirror life in ways not often seen in animated movies. But, if you’ve been to Disneyland or Disney World, then it’s no surprise that Disney is being inclusive.

The characters come alive because the cast is so vibrant. Jake Gyllenhaal, who is too often cast in heavy drama, plays Searcher as a nerdy, vulnerable and animated dad. Dennis Quaid steals the screen from him as the larger-than-life Jaeger whose swollen ego deserves its own zip code. Quaid’s gravelly voice seems stolen from Nick Nolte’s vault. Young-White projects the innocence and shyness of a teen coming into his own and Union and Liu are solid as the mom/pilot and mayor.

The tense, endearing father/son drama on view will engage male audiences. That desire to strike out on your own, while still needing paternal nurturing, is a common rite-of-passage conundrum. Searcher and Jaeger have scores to settle. The rebellious Ethan and smothering Searcher have a stormy test of wills too, as dad tries to mold his defiant son into agrarian life. Ethan: “The farm is so small … the world is so big!”

Strong familial conflict, magical adventures and timely social messaging make this animated feature a bit deeper than most. If Strange World can find its audience, those viewers will be pleased. Why? Because even the trees look cool!