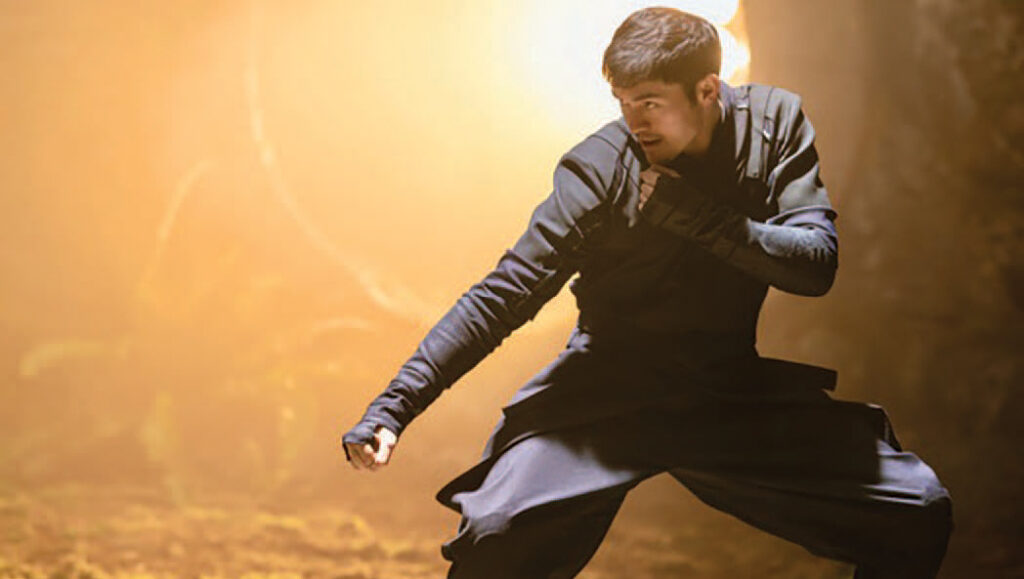 Snake Eyes is an opportunity to see a cast of talented Asian actors dazzle.

Snake Eyes is a welcomed opportunity to see a cast of talented Asian actors dazzle. Even in an action franchise film built around a Hasbro toy, they excel.

The film is an extension of a franchise started in 2009 with G.I. Joe: The Rise of Cobra, when an elite military unit of special operatives (aka G.I. Joe) combated a sinister syndicate of arms dealers known as Cobra. Among the players were Snake Eyes (as played by Scottish actor Ray Park) and Storm Shadow (Lee Byung-hun, The Magnificent Seven). An additional chapter, G.I Joe: Retaliation, was released in 2013 and directed by Jon M. Chu (Crazy Rich Asians). This new entry details the origin of the two aforementioned characters.

Snake Eyes (now played by Henry Golding, Crazy Rich Asians) is known for participating in fight clubs, where he takes a beating yet wins his matches. (How he attained his skills is never explained, and that’s a flaw.) As he brawls, his ability to defeat larger foes gets noticed by a smarmy arms dealer, Kenta (Takehiro Hira). The crook drafts him into his gang with the promise that he will help Snake Eyes solve the mystery of a traumatizing incident that has haunted him since childhood.

In L.A., while carrying out his gun smuggling duties with some seamy men, Snake Eyes befriends Tommy (Andrew Koji, Furious 6) one of his colleagues. After an upheaval and a melee, Tommy heads home to Tokyo and takes his new friend with him. Turns out Tommy is the heir to an ancient noble Japanese clan called the “Arashikage.” His family’s teachers, Hard Master (Iko Uwais, Mile 22) and Blind Master (Peter Mensah, TV’s Transformers Prime), and its head of security Akiko (Haruka Abe, Cruella) train the interloper to become a fierce warrior—physically, skillfully, spiritually and mentally. Why? They’ll need his help as Kenta is out to crush them.

On so many levels, this chapter is far more intriguing than its G.I. Joe predecessors. Audiences, without prior knowledge of this crime/action/thriller/fantasy heritage, could easily think this is a stand-alone production, and in many ways it is. That’s thanks to its judicious director (Robert Schwentke, Tattoo), imaginative writing team (Evan Spiliotopoulos, Joe Shrapnel and Anna Waterhouse) and stellar cast and crew. Minutes after a weak opening generic back-story sequence, which establishes the root of the protagonist’s lifelong angst, the film takes off and individual elements shine.

As the well-thought-out script evolves, Snake Eyes becomes a very complex man with dubious alliances that makes his character arc as unpredictable as it is compelling. His bromance with Tommy is both loving, respectful and cunning: Tommy: “You saved my life. Why?” Snake Eyes: “I looked into your eyes, and I saw honor.” Conversely, the vitriol displayed by Kenta and Baroness (Úrsula Corberó), an agent for Cobra, is particularly venomous and duplicitous.

For good measure, family dynamics pit the very ambitious Tommy against his clan’s conservative matriarch Himiko (Eri Ishida), and their conflicts add emotional standoffs and crises. Suspicion and flirtations between Snake Eyes and Akiko hint at discordance and romance. Akiko: “Want to know how I got my scar? It’s from the last man I trusted.” The pointed dialogue and other machinations—power plays, deceptions, fluctuating allegiances and potential reconciliations — amass in a way that makes what’s on view mesmerizing even into the end credits (stay in your seats, a plot twist is revealed).

Henry Golding has firmly established himself as a leading actor, the kind that generates whispers about him being a James Bond candidate. In this instance, he carries the mantle of emotionally wounded and shortsighted combatant quite well. Well enough to want to see him in more Snake Eyes movies, with or without any connection to G.I. Joe.

Andrew Koji, as Tommy, upstages Golding. Koji has a deeper presence, a more photogenic face, a gruffer gravely sounding voice, stronger stature and an undercurrent of bitterness that overshadows Snake Eyes. The fact that he will morph into Storm Shadow should attract and retain a legion of comic-con fans. Samara Weaving as the hit woman Scarlett; Ishida, Uwais and Abe also take their characters to places far beyond their initial scenes. And Peter Mensah, a Ghanaian actor, has the air, presence and physicality of a shaman.

There are scenes in Tokyo that are reminiscent of Antoine Fuqua’s crime/thriller The Replacement Killers. There are times when the near perfectly choreographed action scenes make you wish the director, cinematographer, art director, production designer and stunt coordinator had opted for an even more artsy look. Visions and movements similar to the ballet like images in director Yimou Zhang’s elegantly crafted act/adv/dra House of Flying Daggers.

The sheer artistry in this film is commendable and watching this brilliant Asian cast brings these characters to life is fascinating.
In theaters now.