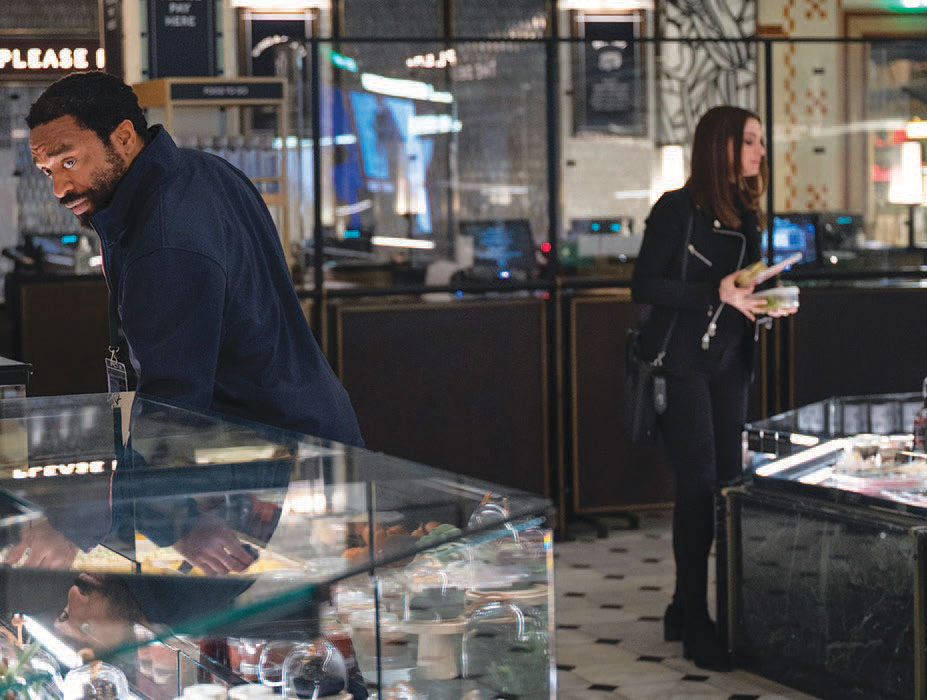 It may be 2021’s first viable COVID-themed movie. Hopefully it’s not the best audiences can expect.

Anyone who has been locked down, pent up, frustrated and emotionally frayed will relate. Life with the virus has been hard and the light at the end of the tunnel is tiny. And so, British screenwriter Steven Knight (Oscar nominated Dirty Pretty Things) pumps out this ode to imprisonment with little flair, not much depth, lots of dialogue, no grasp of one specific genre and unlovable characters. For good measure, in the middle of what is a tiresome couple’s personal drama, he tosses in a caper. Tonal issues and plausibility be damned.

Bringing Knight’s vision to life is the well-respected director Doug Liman, whose reputation started with the hip-to-be-cool Swingers in 1996, includes the thriller The Bourne Identity and the deliciously vengeful Mr. and Mrs. Smith. Knight’s fairly varied and esteemed background, surprisingly, doesn’t make him well-suited for this weakly written and dry romantic/comedy/drama/crime/thriller.

Paxton (Chiwetel Ejiofor, 12 Years a Slave), a poet/writer (aka broke dude) is having a rough go of it. He’s housebound on a tony block in London by a COVID quarantine and is down on himself: “Even my name is doom.” His foul disposition and lack of funds is putting a strain on his relationship with his lady friend Linda (Anne Hathaway, Les Misérables). She’s a busy executive conducting Zoom meetings with her staff from home. She does so in full make up and fashionably dressed as if she is pulling a shift at Vogue. Without blinking, she tells her underlings that they’re being furloughed. A euphemism for “You’re fired, there’s no money to pay you.” Viewers should hold on dearly to this scene, as it is the only viable drama in the entire movie.

Cracks in the relationship have been noticeable. The strain of being around each other, under confinement, has taken them past the brink. Says Paxton to his half-brother David (Dulé Hill, The West Wing): “Linda said she was planning to end our thing.” Yes, that’s true, but the two are still sniping housebound lovers who can’t let go.

The clever part of Knight’s screenplay is that it uses feelings, locations and machinations that audiences in this day and age will recognize: Quarantine anxiety. Dehumanizing video meetings. Long lines at grocery stores. Overindulging in booze, drugs, cigarettes. Shouting across streets to neighbors. Looking for jobs that don’t exist. Squabbling for no reason. The new norm.

Pity Knight didn’t pick more relatable characters. Snooty Linda and the financially challenged scribe won’t muster much empathy. Which is a pity, because it would take that to enthusiastically follow and believe the second half of the script. This part involves a planned, but blundering theft from Harrods—arguably Europe’s most famous department store. It’s a complete coup that the filmmakers got to run their actors and cameras up and down the aisles. Why was Harrod’s so accommodating? They’re closed due to the pandemic and likely need the publicity! Caviar, truffles, Louis Vuitton and rare diamonds all sit idly on shelves starving for tourists’ attention and wealthy buyers. But getting none.

The proceedings might have fared better if the screenplay had kept everything in the moment. Instead, it is laden with one-liner backstory details rehashing a past that doesn’t matter. So, Linda used to smoke cigarettes and she’s now sneaking them on the side. So, she had an affair with a female friend. So, Paxton was once arrested, had a drug problem and is now slipping. Their history is immaterial, doesn’t pep up anything and only mires the storytelling and momentum.

Ejiofor is a supreme actor, but with his diction and statesman-like demeanor, it’s hard to believe him as an impoverished poet moonlighting as a driver. Hathaway is a bit more convincing as an ice queen. But together they have the chemistry of a central casting pairing—nothing more. The ensemble cast performances, which vary from cameo appearances to full supporting roles on set or computer screens, are peppered throughout to little effect. Ben Kingsley, as Paxton’s boss, gives him the moniker Edgar Allen Poe on his ID. It’s a running joke that loses its power in seconds. Ben Stiller plays Linda’s boss, marooned in the Vermont woods with his disrespectful son. Mindy Kaling, Lucy Boynton, Jazmyn Simon (Ballers) and others add their two cents.

Fortunately, the tech crew is pretty astute. Editor Saar Klein’s timing is good. Cinematographer Remi Adefarasin’s nimble camera is where it should be at all times. The score by John Powell doesn’t wreck the mood. And production designer Laura Conway-Gordon makes all settings look quite inviting.

It doesn’t help that the couple is involved in a robbery, for money, when they hardly look destitute. They live in a strikingly handsome oatmeal-colored townhouse with pristine white shutters–not a slum tenement. If you’re looking for convincing Dog Day Afternoon desperation you won’t find it. And that’s a problem. Also, if the virus is so rampant, why are they and store employees walking around Harrod’s with no masks?

Easy streaming access may lure inquisitive adults to Locked Down. But after watching this vapid commentary on our diseased times, don’t expect audiences to stand on their balconies and applaud.