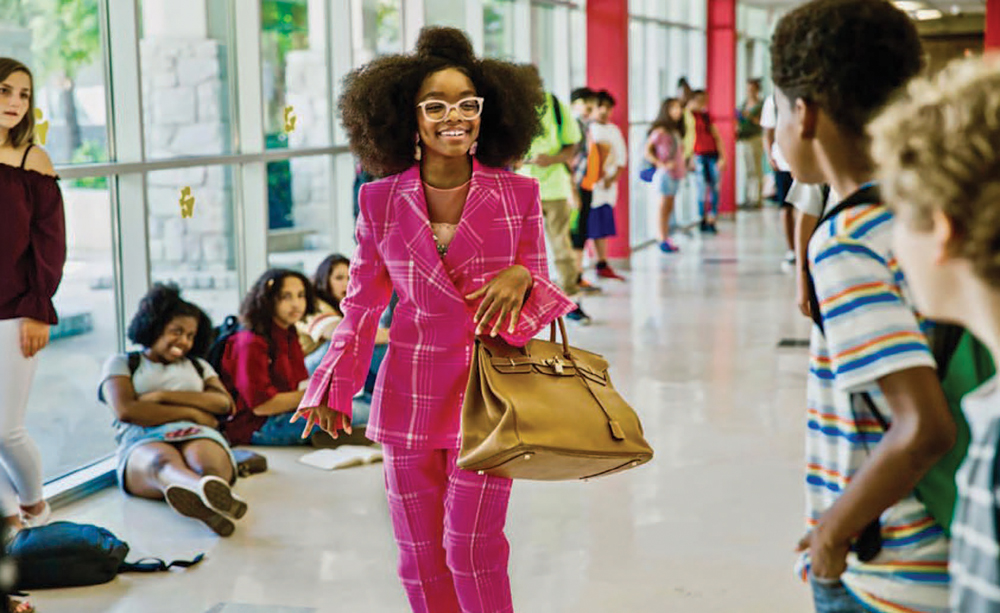 Little is a guilty pleasure. The guilt comes as you watch a 14-year-old actress (Marsai Martin, Black-ish) behaving like a lustful 38-year-old female who flirts with a middle school teacher. It’s kinda pervy. Or when an executive assistant (Issa Rae, HBO’s Insecure) points to her nether regions and gives a man a sexy stare. Fine for adults to see, but do tweens need to look at that? The pure pleasure comes when you laugh at the extremely funny and very animated performances by Martin, Rae and the incomparable Regina Hall. The sisters are crae-crae!

How did all this come about? Word is Martin viewed the Tom Hanks trans-age movie Big (a kid in a grownup’s body) with her parents. She thought it would be cool to reverse the situation and have an adult in a teen’s body. She approached her agent with her novel idea. He or she balked, as they often do, and Martin fired the agent and got her project on the road. Hence her executive producer credit—at age 14! And what were you doing in your tween years?

It’s a simple set-up. Jordan Sanders (Hall) runs her own tech company. Her management style is somewhere between Hitler’s and Idi Amin’s, only she’s less kind. Prissy, exacting, bossy, negative and a dream-killer. She makes everyone suffer. Staff, valet, even the baristas at Starbucks cower in her presence. Her assistant April (Rae) is right in the line of fire. No matter how attentive April can be, it’s never fast or good enough for the very successful and egocentric Jordan. But as they say, karma is a little b—-.

One day in her office’s parking lot, Jordan goes off on a little girl named Stevie (Marley Taylor), an amateur magician who is the daughter of a food truck vendor. The intimidating boss screams at the diminutive tyke, “Check you Boo!!!” But Stevie gives back what she gets. They’re in a standoff, like the Wicked Witch of the West and Dorothy ready to rumble. Then Stevie takes out her magic wand, swirls it around and hurls a curse: “I wish you were little!” Not long after, the evil and older executive wakes up one morning as a 13-year-old girl (Martin). She tries to berate and intimidate like she used to, but the people she encounters are not scared anymore.

If you’re looking for something profound and extraordinary from this formulaic script by Tracy Oliver (Girls Trip) and Tina Gordon (What Men Want and TV’s ATL), you will be disappointed. If you’re just out for a lark, jump onboard and enjoy the laughs. The characters are modern, urban and living large. The sexy dialogue and inferences just hit the top of the film’s PG-13 rating.
There are sight gags (Martin in clothes way too big) and awkward moments (little Jordan pawing big Jordan’s boyfriend). Work humor (the creative meetings skewer office dynamics). Love interests: Luke James (Star) as Jordan’s constantly shirtless boytoy Trevor; Tone Bell (Whitney) as April’s unrequited love; and Justin Hartley (TV’s This Is Us) as the school teacher being ogled by a kid.

All the elements of a decent comedy are in place and director/co-writer Tina Gordon is quite adept at working this female-driven story into a pleasant experience. Though what’s on view is sexy at times, it never reaches the outer limits of Girls Trip. Though some may deem this as a paint-by-numbers film, it’s a bit less predictable than the similar but inferior What Men Want, which also had a female executive character who lived in Atlanta.

Given a premise that is novel but not new, a script that is worthy but not stellar and a location (Atlanta) that is overused, the cast succeeds regardless. Regina Hall is marking her territory. She is a gifted comic actress and her mood swings from mean to meaner to meanest are hysterically funny. She’s a go-to comic actress. The dour Rae makes Hall’s perfect foil. The guys—James, Bell and Hartley—are up to the task. Cameos by SNL’s Mikey Day as the selfish client Connor and Rachel Dratch as a truant officer are humor filled.

However, only one artist can take credit for turning a seed of an idea into a bona-fide comedy, and that’s Marsai Martin. When obstacles were placed in front of her, she broke through them. She took on a challenging role and nailed it. The camera catches all of her weird facial expressions and mannerisms. Her comic timing is impeccable. She knows when to clown around, be demure, introspective and direct. This is a big first step in what should be a promising film career.

But know that Martin, Hall and Rae will make you laugh out loud, even as you’re calling child protective services.