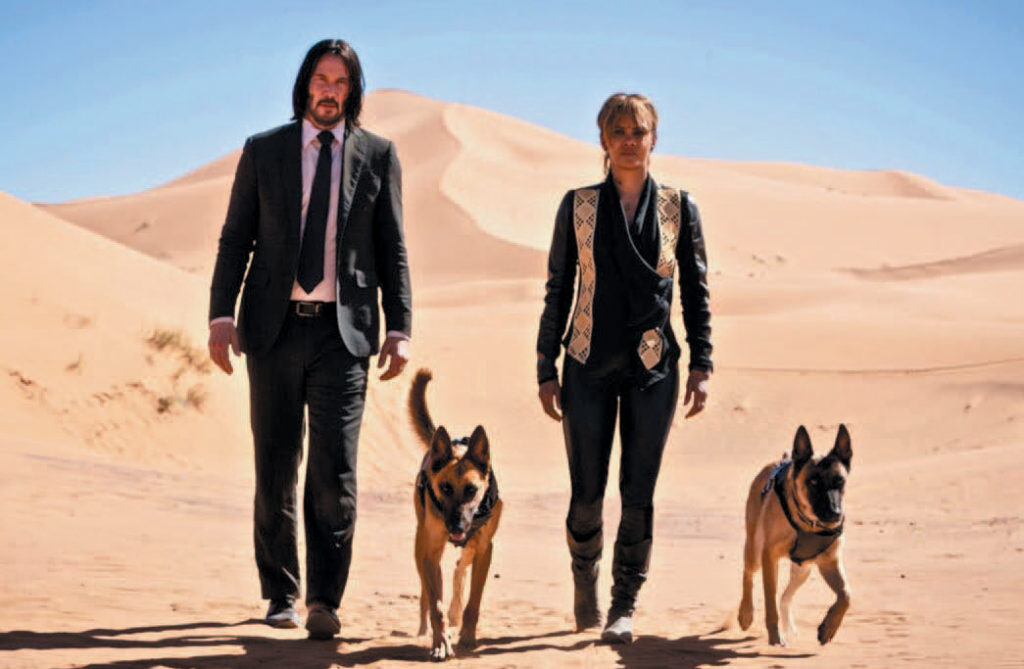 Should the glorification of gun violence, as depicted in this action/thriller, become a thing of the past? Is that notion worth a discussion? Think on it.

John Wick is back. In Chapter 3 of this ultra-violent franchise, this assassin digs deeper and deeper into an underworld of hit men and women who are greedy for conquests and money.

Stunt double (The Crow, Matrix) turned director Chad Stahelski (John Wick, John Wick: Chapter 2) starts this tale of lawlessness with Wick knee-deep in action. He’s running pigeon-toed down rain-soaked streets, across Times Square, through traffic. Before you can take a breath, a hit is put on him with a $14M bounty. What did he do? He knocked off a member of an assassin’s organization, The High Table, in the wrong place.

That kind of loot brings more killers out of the woodwork than roaches scoping out a piece of cake on a kitchen counter. The dude is “excommunicado.” He’s the prey, and the hunters want him dead, not alive.

Hopefully the Stuntman’s Association and Stuntwoman’s Association demanded bonus payments for the 90 body doubles in this movie. Whatever the lead stars can’t do, they do with a verve and athleticism that is astonishing to watch.

The action in this crazed ode to human destruction, whether it’s on horseback or motorcycles or in a hotel or souk, is some of the most mind-boggling and kinetic that’s ever been displayed on-screen. The level of carnage is startling—if not overwhelming. Gunshots pierce bodies, heads, knees and throats. Again, and again.

Keanu Reeves as Wick is 30 percent a punching bag and 70 percent an aggressive warrior. Martial arts. Gunplay. Reeves convinces you completely that Wick is the professional all other killers look up to. There is no franchise, as we know it, without him. He dominated The Matrix, and now this.
Ian McShane is back as Winston, the haughty proprietor of the Continental Hotel. He runs his business, but is under the thumb of a syndicate that calls the shots and enforces their rules. His right-hand man Charon is played with stern conviction by Lance Reddick (The Wire). Add into the mix: The Adjudicator (Asia Kate Dillon, Orange Is the New Black), who implements consequences. The stealth killer Zero (cult icon Marc Dacascos, lately of Hawaii Five-O) and his deadly ninjas. A local NYC neighborhood leader, Bowery King (Laurence Fishburne). And a Belarusian ballet master named The Director (Anjelica Huston).

The biggest surprise, in a perfectly cast movie, is Halle Berry as Sofia. She plays an old acquaintance of John’s and he needs her help. Initial scenes between the two sitting at a coffee table are dull, like a second-rate acting class. But oh heavens, when the fighting begins Berry pulls out her A-game, and is more vicious than a rabid dog. Speaking of which, her performance is enriched greatly by the appearance of two Belgian Malinois. That canine breed was reared to be herders, but are now used for policing and protection. Berry and her two four-legged weapons are integral to this chapter and help make it more unique that the other two. In fact, if Sofia gets a spin-off, a legion of fans will follow her.

Chad Stahelski creates a world all his own, taking style hints from filmmakers like John Woo (A Better Tomorrow), Chan-wook Park (Oldboy) and Sam Peckinpah (Straw Dogs). Few directors are this deft at creating a wall of violence that intensifies right up to the end. It’s stunning, relentlessly vicious, soulless and well-planned. The script (Derek Kolstad, Shay Hatten, Chris Collins and Marc Abrams) dishes it out, and Stahelski shovels it to the audience, as John Wick: Chapter 3 – Parabellum builds to a chaotic ending. Fight after fight. Gun battles in rapid succession.

You have to admire the spectacle, the rampant, grotesque brutality. If you can’t, at least the target audience of action/thriller/martial arts fans will. They’ll be euphoric.

But questions arise: “Should impressionable tweens and teenagers be allowed to see this mind-numbing violence?” “How will they process it if they do?” “Is an ‘R’ rating (parents must accompany anyone under age 17) appropriate?” “Would an “NC-17” rating (no one under 17 can see this film) be more fitting?”

After weary adult filmgoers stumble out of the theaters, those issues may arise as they chat over a stiff drink, try to calm their frayed nerves and say to themselves: “WTF?”