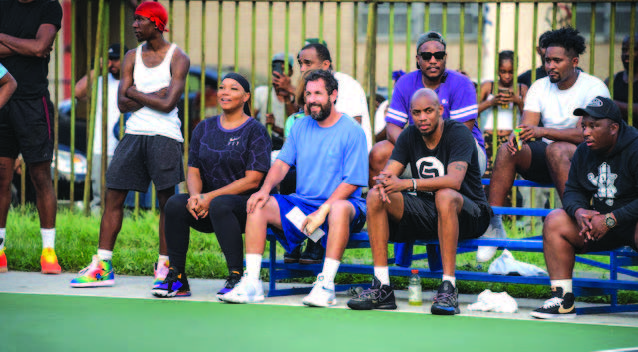 When comic actor Adam Sandler took on the challenging role of a diamond dealer in the gritty riveting film Uncut Gems, he crossed a chasm. It was as if he’d put his past behind him and was determined to become a multifaceted actor. Hustle proves that point.

Sandler doesn’t overdo the basketball scout character of Stanley Sugarmen. He lives it. Sugarmen is the attentive and skilled employee of the Philadelphia 76ers. He travels worldwide looking for exceptional talent. Finding that “missing piece” is almost an allusive endeavor, yet he continues. His plucky efforts are well-respected by the franchise’s owner Rex (Robert Duvall): “You never took anybody’s s–t.” But not by the boss’s conniving son Vince (Ben Foster). 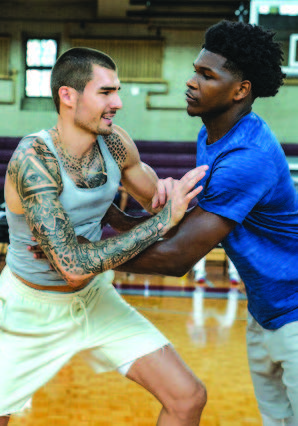 When Stanley finally finds an uncut gem of a player in Spain, a street baller named Bo Cruz (NBA player Juancho Hernangómez); he thinks his career is on an upswing. But Vince has every intention of sabotaging Stan’s protégée. Will Stan ever catch a break?

For basketball fans, this LeBron James-produced sports drama/comedy is paradise. Icons like Shaq and Dr. J make cameos. Dunks, three-pointers, trash talking and other mainstays of the game are in play. Still the heart of the film is Stanley’s journey from company man to outcast, to mentor and hopefully savior. It’s a transition that is well developed and documented by Will Fetters (A Star Is Born) and Taylor Materne’s thoughtful, humorous and heartwarming script.

Sugarman’s personal and professional lives are well established. His family is a bedrock (Queen Latifah plays his wife Teresa and Jordan Hull his daughter Alex). His colleagues superficial (Jaleel White as Blake, VP Player Personnel). His friends support him (Kenny Smith as Leon a sports agent and old buddy).

The challenges he faces from past mistakes and the mixture of respect and derision he confronts charts his course. It’s no wonder he’s willing to shepherd an imperfect but talented basketball player. They both are haunted and hounded by previous human errors—bad reputations only success can put to rest. Even over the roughest patches, the fatherly scout stays hyped about his new charge: “This guy is as if Scottie Pippen and a wolf had a baby, Lisa Leslie raised him, and Alan Iverson was the babysitter.”

The odd man out persona weighs on Sandler’s shoulders, but he is more than up to the task. His emotions either float close to the surface or erupt. His humor is twisted and funny when it needs to be. Yet the seriousness of certain moments, like the revelations that expose his dishonesty, are rendered with a sensitivity that will make audiences hope that Stanley will prevail even as his failures mount.

Director Jeremiah Zagar (We the Animals) finds the right tone for the proceedings. He directs the cast as if they were in a hybrid film that was a combination of Ballers, Rocky, Creed and Hoop Dreams. With the aid of editors Tom Costain and Brian M. Robinson, scenes are mercifully short and to the point. There is an engaging and eclectic collage sequence, during one of Bo’s money hustling pickup games, blast popup images on the screen like a deck of basketball cards being shuffled. These quick video bursts of energy towards the film’s end help sustain momentum.

It’s noticeable that the cinematography (Zak Mulligan, We the Animals) expertly catches the balls in motion, players charging down the court and the intimate moments when Sandler and Latifah share bedroom scenes—the kind that make husbands and wives friends and lovers.

The bouncy musical score by Dan Deacon (Ascension) is praiseworthy too. A very hip playlist includes selective bits of rock, rap, soul and hip hop in just the right places. The clip of Tierra Whack singing “Heaven” is perfectly timed: “Angels watching over me…I was blind, now I can see…Everything you did for me… Knew you would come eventually.”

It’s never a real film unless Queen Latifah is in it. Utah Jazz player Juancho Hernangómez may find himself moonlighting as an actor after his strong performance. Minnesota Timberwolves 1st draft choice Anthony Edwards, as Bo’s archrival Kermit Wilts, talks a lot of smack. He’s as brutal as Bo is oversensitive.

Still the core of this film is Sandler and his meditative interpretation of a put upon man seeking his day of reckoning. It’s a nice surprise watching a comic actor, who was once the subject of ridicule for his blue collar films, build a reputation as a nuanced performer who commands respect.