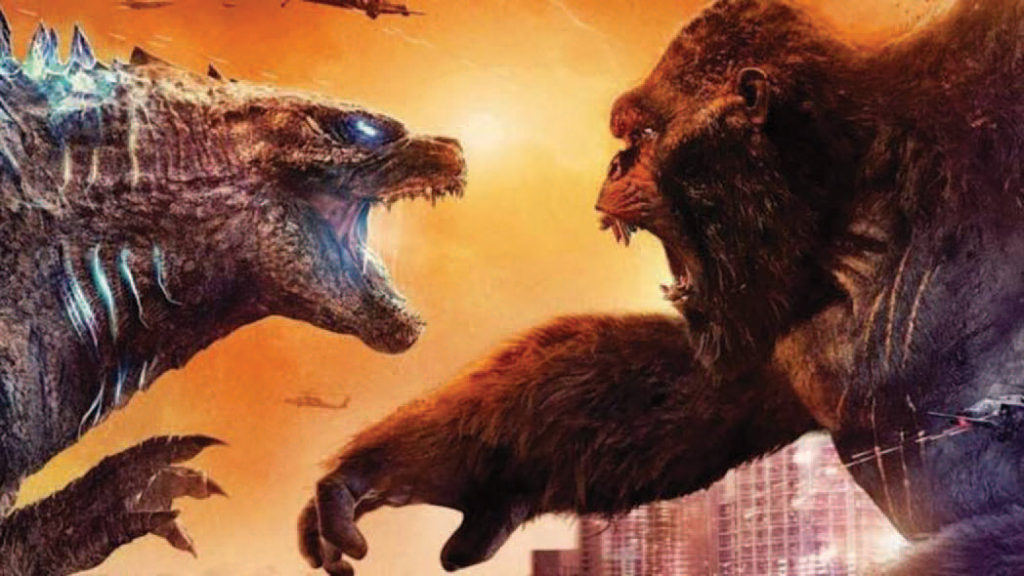 In this new visual feast, the two superstar behemoth monsters, Godzilla and Kong, are being cast together like WWE stars for WrestleMania.

These two superstar behemoth monsters are being cast together like WWE stars for WrestleMania. Godzilla represents the East: Tokyo, Hong Kong. And Kong the West: Skull Island and formerly New York. Something is provoking the fight. Is it nature? Is it man and his greed for power? Most likely, the latter in this fairly ambitious script by Eric Pearson (Thor: Ragnarok) and Max Borenstein (Kong: Skull Island).

Godzilla lives in the sea. Kong is in repose in a gigantic man-made jungle playpen dome. He is cared for by Ilene Andrews (Rebecca Hall) and loved by her adopted daughter Jia (Kaylee Hottle). The young girl is one of the last human native survivors of Skull Island, Kong’s home, and she has bonded with the big ape. Kong’s world turns upside down the day scientist Nathan Lind (Alexander Skarsgård, Big Little Lies) swears he needs the famous primate for a special mission. A quest that involves Godzilla and finding a powerful life force.

These two main intertwining subplots lead to the archetypical “save the world” and “do-or-die” ending. They serve a purpose, though not much more. The characters are shallow, their dialogue unmemorable, never profound, and perfunctory at best. There is just enough in play to keep action/adventure/thriller fans guessing and engaged for 113 minutes. Then for good measure, a surprising number of sci-fi elements are thrown into the mix: anti-gravity helicopters, journeys to the center of the earth, robotic surrogates.

Even with shiny futuristic tech devices, there’s something so very primal about the animosity between Kong and Godzilla and the way they battle. Typical combat consists of punches, body slams, drop-kicks, choke holds, biting and various other wrestling moves. Their clashes also include Godzilla’s ability to open his jaws and emit radioactive beams. If fans stay in their seats long enough during theatrical screenings or while watching G vs. K on HBO Max, they will discover even more fanciful weapons.

Though the aforementioned cast, along with actors Shun Oguri, Eliza González, Lance Reddick, Kyle Chandler, Ronny Chieng and Hakeem Kae-Kazim, are fun to watch, noticeably multicultural and talented, they aren’t the main attraction. The weight of the film’s success is not on them, or the screenwriters. It’s all about the visuals, staging and fight-scene choreography, as coordinated by the director and created by the tech crew. For the most part, these folks don’t let anyone down.

Tom Holkenborg’s loud-louder musical score lays on the thundering timpani drums, rousing violins and blaring horns real thick. Scenes from Kong’s biosphere, to battleship armadas, to crashing Hong Kong buildings and wondrous natural landscapes are the brainchildren of production designers Owen Paterson and Thomas S. Hammock. John “DJ” DesJardin’s savvy visual effects are best manifested in the throwdown melees and not so much in the behemoths’ appearances. Some scenes may seem superfluous, but even those are neatly tied together to the others by editor Josh Schaeffer. Ann Foley’s designs make the clothes fit the characters while director of photography Ben Seresin wields his camera like a sword on location shots in Hawaii, Australia and Hong Kong.

With child actors, particularly girls, dominating so many pivotal roles, expect your kids to enjoy this family friendly excursion in ways some adults won’t. This isn’t the best big bruiser extravaganza ever made, but your eyes will stay glued to the screen, your eardrums will pound and heart rate will increase.

After a year of COVID, the excessive escapism in 2021’s first event movie is good for the psyche. So, let the colossal beasts shake paws and come out swinging. Let the audience be the refs. May the last heavyweight titan standing live to fight another day.

In theaters now and on HBO Max.