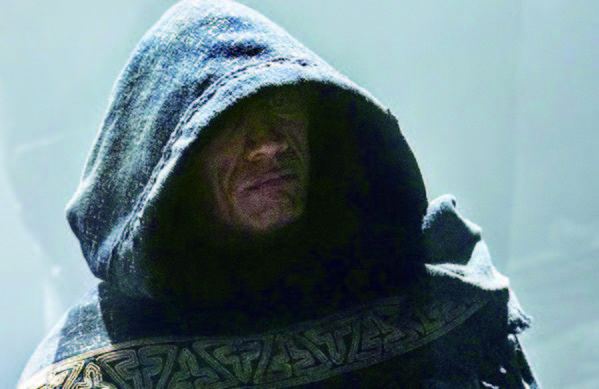 Introducing DC comics latest crime combatant, Black Adam. His superhero traits are similar to Superman’s (flying, ultra-strength, etc.), but there are key differences. One has a pleasant personality and values human lives, and the other, an angry malcontent, doesn’t give a flying leap. One was born on Krypton and grew up on earth, which many moviegoers already know. However, less is known about the enigmatic bad boy. Hence this origin film, which needs to establish Black Adam’s beginnings, why he’s so embittered and how he fits into the world, or at least the DC comics universe.

Dwayne “The Rock” Johnson has shepherded this project, his lovechild, for decades. Bringing the story of DC’s brown-skinned superhero to fruition is a major achievement and the movie star has earned his props—even if this act/fan/sci-fi is less than perfect. He was born to play Black Adam, every role in his past builds up to this persona and it’s a crown he was destined to wear.

Screenwriters Adam Sztykiel (Rampage), Rory Haines (The Mauritanian) and Sohrab Noshirvani (Informer) don’t have a successful superhero movie in their spotty filmographies. Yet, they were tasked with developing characters, storylines, dialogue and major plot points for a comic book anti-hero who was conceived back in 1945 and swathed in Middle Eastern culture. Former music video and commercial director turned filmmaker Jaume Collet-Serra, who worked with Johnson on Jungle Cruise (a dubious achievement at best), helms this venture, which might explain the emphasis on movement and flow and less weight on mind-blowing special effects.
The ancient city and now bustling metropolis of Kahndaq lives under tyranny. It’s citizens long for their freedom. Through a mishap in an ancient tomb, archeologist Adrianna (Sarah Shahi, The Rookie) unleashes Teth Adam (Johnson), a powerful being who’d been imprisoned for 5000 years. Angry and looking for vengeance against millenniums-old adversaries, he is on a tear: “I was a slave before I died. I yield to no one.” The Justice Society (the very first superhero team, which was created back in DC comics in 1940), a squad of modern-day heroes, is determined to catch and detain the angry rebel.

The JSA is directed by Amanda Waller (Viola Davis), who zooms in her commands remotely to the team: Hawkman (Aldis Hodge, One Night in Miami…), Doctor Fate (Pierce Brosnan, Goldeneye), Atom Smasher (Noah Centineo) and Cyclone (Quintessa Swindell). Teth Adam, aka Black Adam, will not go quietly. Neither will the enemies of the Kahndaq people.

The premise turns into a serviceable narrative that gives the mighty ones and their foes plenty to fight over for 2h 4m. Collet-Serra’s background in videos helps him make the footage kinetic. Aerial chases, fights, kidnappings and explosions abound, though none are that dissimilar from those depicted in any other movie of this genre. Average audiences might not care, but hardcore Comic Con heads may feel that Adam’s flying is too tell-tale CGI and that there’s no excuse for cheesy effects in a film with a $200M budget.

The fight scenes are filmed decently (cinematographer Lawrence Sher, Joker) and the film’s depiction of early life in Kahndaq has been shot in an evocative hue. The city’s exteriors and interiors (Tom Meyer, Finch) conjure the Middle East/North Africa region, everyday clothes from olden to modern times (Kurt and Bart, Deadpool 2) reflect the locals and the crusaders’ costumes are lavish enough to fit the bill. Loud music piques feelings (Lorne Balfe, Black Widow) and credit editors Mike Sale and John Lee for giving the footage momentum that rarely wanes.

The cast is energized. Mohammed Amer (TV’s Ramy series) as Adrianna’s brother and driver Karim provides comic relief and Bodhi Sabongui, as her spunky son, should appeal to kids, tweens and teens. When you need someone to be the bad guy, actor Marwan Kenzari (Aladdin) knows how to pour on seething, hissing villainy like a viper. All the members of the JSA have verve, though the powers Atom Smasher and Cyclone possess are unimpressive.

Johnson, over the course of a 21-year, up-and-down movie career, has built a prolific actioner resume. Looks like a wrestler, struts like a movie star and acts like he could kick anyone’s ass. Here, he’s in his glory. The lighting on his face and physique deifies him. The skintight reptile-looking costume highlights a Mr. Olympia fit body. His glare could stop a locomotive. Johnson’s performance stands atop a high mountain peak, while the script, direction and special effects are left on a plateau.

This comic book adaptation is not in the same league as The Dark Knight (visually stunning), Wonder Woman (fresh and surprising), Black Panther (monumental) or Deadpool (deeply depraved). Yet it’s distinguished itself just enough to satiate movie goers, entertain streaming audiences and warrant further integration into the DC universe.