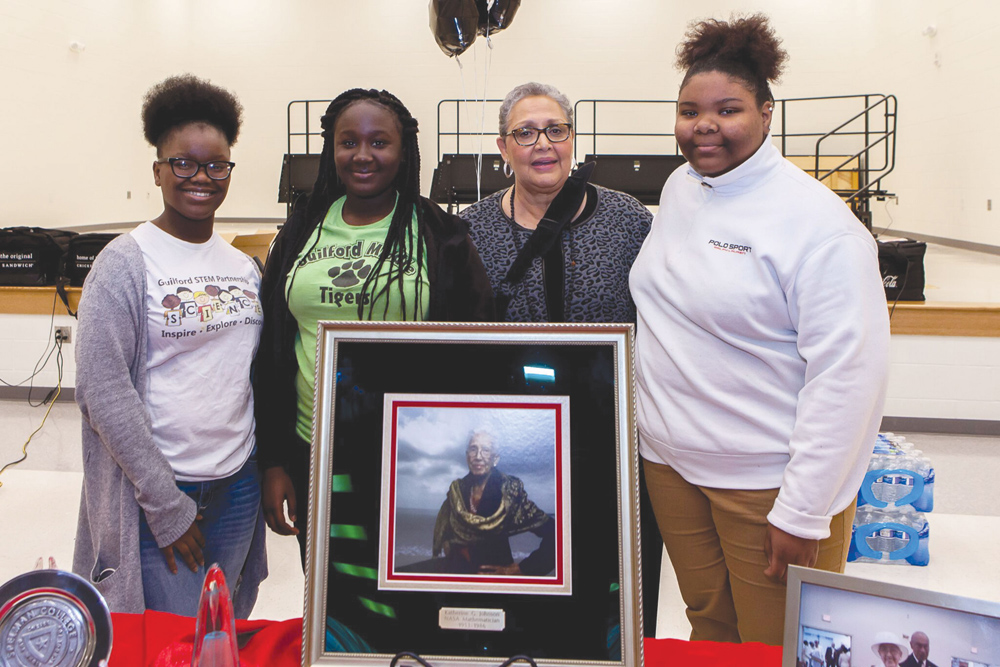 Katherine G. Johnson is the inspiration for the best-selling book and movie, “Hidden Figures, The American Dream and the Untold Story of the Black Women Who Helped Win the Space Race,” by Margot Lee Shetterly.

Moore’s pride in her mother came through clearly as she discussed her mother’s accomplishments the Western Guilford students, who have been engaged in structured STEM (Science Technology Engineering Mathematics) study groups. Moore discussed the hard-won achievements of her mother, who persisted despite overt racial discrimination and a dearth of opportunities for women. Katherine Johnson’s prodigious mathematical skills were essential to the successes of the United States’ space program, which became known as NASA, the National Aeronautics and Space Administration.

Katherine Johnson was born in White Sulphur Springs, West Virginia in 1918. She graduated from high school at the age of 14 and went on to further her studies by earning a B.S. with highest honors in mathematics and French from West Virginia State College in 1937. In 1953, she took a position at the “all-black West Area Computing section at the National Advisory Committee for Aeronautics’ (NACA’s) Langley laboratory (Hampton, Virginia), which was headed by fellow West Virginian and Hidden Figure notable, Dorothy Vaughan.”

As NACA became NASA, Johnson conducted the trajectory analysis for Alan Shepard’s May 1961 mission Freedom 7, America’s first human spaceflight. In 1960, she and engineer Ted Skopinski coauthored “Determination of Azimuth Angle at Burnout for Placing a Satellite Over a Selected Earth Position.” This report calculated the trajectory of an orbital spaceflight and landing. Johnson is the first woman in the Flight Research Division to have received author credit for such a report. In 1962, Johnson was instrumental in deriving the mathematical calculations for the NASA orbital mission of John Glenn.

According to Margot Lee Shetterly, author of “Hidden Figures,” Johnson said her greatest contributions to space exploration include: her calculations to synchronize “Project Apollo’s Lunar Lander with the moon-orbiting Command and Service Modules;” her work on the Space Shuttle and the Earth Resources Satellite; and authoring or coauthoring 26 research reports.
In 1986, after 33 years as a Langley mathematician, Katherine Johnson retired from NASA. In 2015, she received the Presidential Medal of Freedom, presented by President Barack Obama.