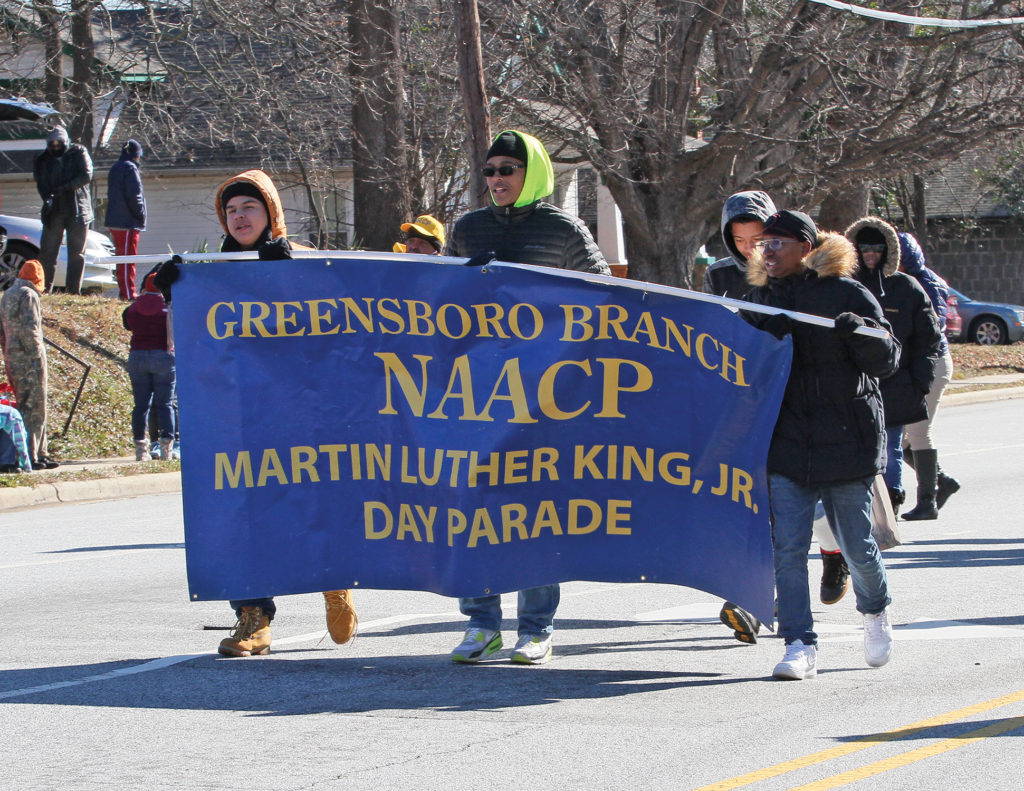 “We have to remember who Dr. King was. Dr. King was someone who challenged the status quo. He was someone who understood bringing communities together would be good for our country,” said Janaye Ingram, keynote speaker for the 2019 Greensboro Human Relations Commission annual Martin Luther King Jr. Memorial Breakfast.

Ingram, who was named one of the Female Faces of the New Civil Rights Movement by Black Entertainment Television (BET), one of The #Woke100 by ESSENCE Magazine and Head of Logistics for the Women’s March on Washington, addressed a crowd of more than 1,000 people at the Koury Convention Center on Monday morning.

The annual breakfast is the kickoff for a day full of parades, community service activities and remembering King’s legacy across the city.
“This is a moment for our country right now. It has reawakened activism,” said Ingram. “We have to keep the fire for justice going. It’s not enough to do community service just on MLK day. There is a role for everyone in this fight.”

“Our role in this is to learn from the past and the present, and learn how we’re going to combat this going forward,” said Kenner, speaking from a Millennial perspective. “Teach your children what their color means in this world.”

Brandon, who participated in the Greensboro lunch-counter sit-ins of the 1960s and the 1968 March on Washington, noted that too often people focus on the end of King’s speech where he talks about his dream. He urged people not to forget that the reason they were gathered for the March on Washington was to talk about jobs, fair wages and economic equality.

“I don’t like the term ‘dream.’ This is not about a dream. This is about action. It is about jobs, fair wages, economic equality,” said Brandon.
The Greensboro Human Relations Commission first established the breakfast in 1987 to commemorate the life and works of Dr. King. Greensboro Human Relations Director Dr. Love Crossling reminded breakfast attendees that the yearly event provides an opportunity for the public to reflect on the status of human relations in Greensboro, and inspire community members to affirm the principles of equal opportunity and treatment for all.

That spirit of interfaith sharing continued at St. James Presbyterian Church with its 14th Annual Martin Luther King Jr. Day Interfaith Worship Service that focused on a celebration of King’s message through song and scripture.

The interfaith service featured spiritual readings from the Holy Quran by Wasif Qureshi of the Islamic Center of Greensboro, from the Torah by Rabbi Andy Koren of Temple Emanuel, and from the New Testament Holy Bible by Rev. Ernie Thompson of Westminster Presbyterian Church.

Hymns were performed by the St. James New Generation Praise Team and The Bennett College Concert Choir. The church was able to raise $7,000 in offerings to assist with the college’s fundraising campaign to maintain accreditation at Monday’s MLK service. The college is trying to raise $5 million by February 1.

Bennett College President Dr. Phyllis Dawkins thanked community members for the outpouring of support the college has received from around the city.
The service also included a liturgical dance performance by A.D.O.R.E. (Adult Dancers of Religious Expression) and a dramatic reading of King’s “I Have A Dream” speech.

Rev. Racquel C.N. Gill, a Baptist preacher from South Carolina, served as the keynote speaker. She focused her sermon on biblical famines and how it compares to families now who are being affected by daily struggles, such as the government shutdown, poverty and oppression. She referred to the biblical story of the Prophet Elijah, who prayed over a widow’s dying son and spoke life back into him.

Gill explained that people have to do the same to others. Speak positively to one another and be understanding of other’s circumstances.
“It doesn’t matter who you are or what mistakes you made, God loves you. In God’s kingdom, the cook is just as important as the preacher,” said Gill.

She also told people to not get discouraged when working for justice, but to remember that it is God that calls you to be a good servant.
Gill said, “When times get difficult, and you feel like you want to leave, remember your why. Your why will keep you grounded. This work is not from your own intuition; this work is because there is a God that tells us to move.”