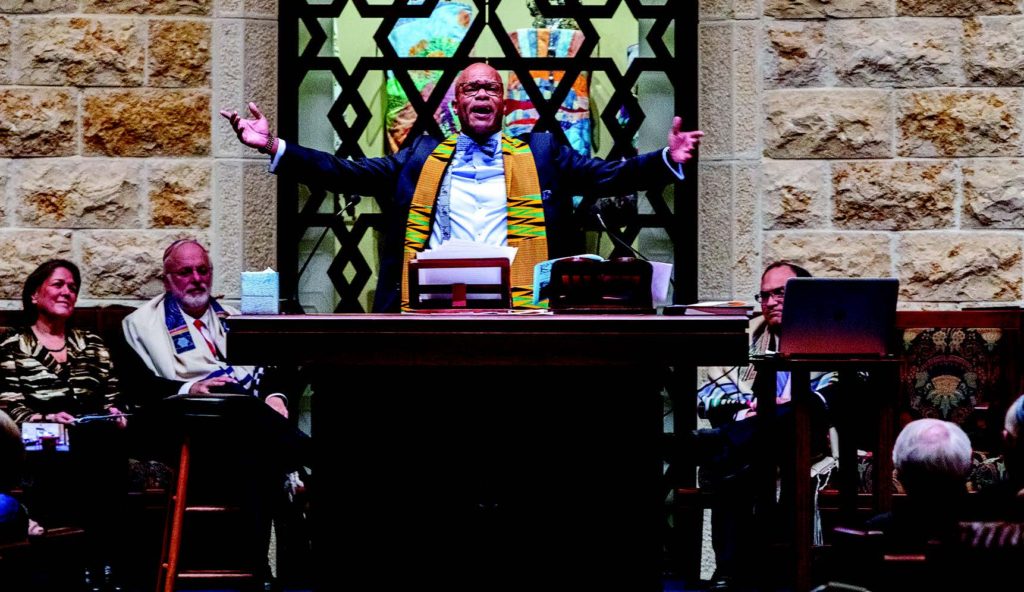 The Martin Luther King, Jr. holiday began Friday evening at Temple Emanuel of Greensboro with a Shabbat service honoring the life and legacy of the slain civil rights leader. Guest speaker for the service was Rev. Dr. Darryl Aaron, pastor of the historic Providence Baptist Church of Greensboro. In his sermon, Aaron said, “Dr. King was sent by God to change the bad script America had been following for years and what we need more than ever are some people brave enough to change the script.”

Aaron’s sermon was followed by performances by the High Point University Genesis Choir and the choir of Temple Emanuel.

Lynch Hunt, a fitness transformation specialist, life coach and owner of A Way Of Life (AWOL) Fitness served as the keynote speaker. AWOL Fitness is a multi-faceted business that uses fitness, supplements, motivational speaking and education curriculum based courses as well as community outreach to educate, motivate and empower people to transform their minds and bodies.

“You’re going to have to become the dream,” said Hunt.“The dream was not just Dr. Martin Luther King’s, the dream is yours.”

Hunt shared with the audience that he was once the leader of an $8.3 million drug operation in the late 1990s and early 2000s, resulting in him spending 10 years behind bars. He discussed how once he was incarcerated; he had to learn how to enhance his own growth and development.

“I had to reprogram my mind — change my own subconscious emotions, feelings and thoughts,” said Hunt.

After his release from prison, he began his career in fitness training. Starting with a few hours as a personal trainer at a gym, and then transitioned into providing private training sessions in his home, until he finally opened his own gym. Hunt is also the author of a book, “From Prison to Prosperity.” His book helped influence legislation introduced by U.S. Rep. Mark Walker of Greensboro on criminal justice reform that would enlist several federal agencies to train inmates in fields such as manufacturing and health care so they are better prepared to succeed after their release.

Hunt encouraged the breakfast audience to follow their dreams. Once you set your goals, and put them into action, you are well on your way to success.

“We’re not living the dream because we are not acting. ACT stands for Action Changes Things. You gotta start where you are and make something happen. God placed a seed in all of us, we’re just too afraid to dig,” he said.

Every year the breakfast is followed by the MLK Day Parade, The Volunteer Center’s National Day of Service Activities at the Greensboro Coliseum and an interfaith celebration at Saint James Presbyterian Church.