Miller Named Mid-Major Player of The Year by ESPN 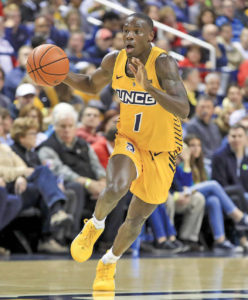 The six-foot UNC Greensboro (UNCG) senior human highlight was named by ESPN college basketball reporter Myron Medcalf as the Pre-Season Mid-Major Player of the Year. Overall, the Spartans received a lot of love from ESPN during its mid-major preseason preview that appeared online last Thursday.

For Miller, this honor comes a day after he was named a preseason Mid-Major All-American by Stadium Wednesday. This is the fourth major honor for Miller since he withdrew from NBA Draft consideration in July. There will probably be more to come as Miller has established himself as one of the elite performers in college basketball.

Earlier this month, he was named as the Southern Conference’s Preseason Player of the Year by Blue Ribbon College Basketball magazine.

Last month, he was named to College Basketball Review’s 2020-21 Preseason Mid-Major All-American Second Team last month. It’s a terrific honor for the reigning Southern Conference (SoCon) Player of the Year and Defensive Player of the Year.

Miller helped the Spartans win 23 games last season. It was the fourth consecutive year that UNCG finished with at least 20 victories.

He finished the season second in the country in total steals with 89, fourth in steals per game with 2.78, and became the Spartans all-time steals leader. He enters the 2020-21 season with 241 career steals. Along with his sterling defensive work, he finished second in the SoCon in scoring (17.8points per game) and led the Spartans with 2.7 assists per game.

Miller can impact the game in so many ways. His playmaking ability at both ends of the court make him lethal at any given moment according to CBB Review.

Meanwhile, in the ESPN preseason preview, the following was said about the Spartans from an unnamed coach.

“They’re tough. They make teams one-dimensional. They’re handsy, they’re physical, they’re athletic. They physically and athletically overwhelm most of the teams in the league. That zone press is death by 1,000 cuts. You get over the line with 22 seconds left [on the shot clock], can’t run your stuff. You need guys to go break them down.

“The SoCon has good basketball programs that invest in men’s hoops, facility-wise, salaries for coaches, charter flights. It’s a hoops league. It’s also programs with tradition. Almost half the league has won at least a game in the NCAA tournament. We’ve got coaches who understand the job they’re at and play a style and recruit accordingly.”

Four straight 20-win seasons have made the Spartans a model of mid-major consistency under ninth-year head coach Wes Miller. UNCG has won 104 games over the last four years, which is the second most of any Division I program in the state of North Carolina.

In addition to Isaiah Miller, guard Kaleb Hunter is also back as a double-figure scorer for UNCG, which returns 12 players.