Michaux Prepares to Leave the House 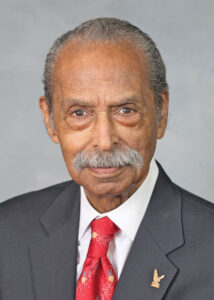 After 39 ½ years in the N.C. legislature, Durham Rep. H. M. “Mickey” Michaux Jr. announced recently that he would not be running for re-election.

Given that Michaux, 87, has won 20 straight elections, his announcement gave some of the state’s top leaders pause.

“For decades, Mickey Michaux has fought for justice in North Carolina, and is a legend in the fight for civil rights, said Gov. Roy Cooper. “Your presence will be missed in the N.C. General Assembly.”

Even former governor, Beverly Perdue (D), had to take to Facebook to say “Goodbye” to the legendary lawmaker.

“Job well done, my friend,” she wrote, after noting that Michaux’s “handprints” were all over “North Carolina public policy decisions that are in the best interests of all of the people . . ..” “Thank you for your life of service.”

Indeed, Michaux’s razor sharp physical profile, snappy dressing, and witty, yet knowledgeable pronouncements, have served him well during his long legislative tenure.
“Remember Lincoln’s opening line in the Gettysburg Address, “Four score and seven years ago? That’s me,” he says slyly, adding that he never thought he’d live this long, or be doing what he’s been doing.

There can be no question that Rep. Michaux is one of the most knowledgeable state lawmakers of any stripe. So when younger legislators like Rep. Ed Hanes of Winston Salem, or Rep. Amos Quick and Cecil Brockman of Greensboro, think about how Michaux helped to mentor them upon their first years serving, it reinforces the notion that Michaux is very much a father figure to younger Black lawmakers.

“He took an interest in me, and shared his vision,” Rep. Hanes recalls. “I’m forever grateful for that.”

“The N.C. House will have a void with his absence,” mused Rep. Quick. “But his work will speak for him throughout history.”

Michaux, a Durham native, remembers his father taking him to one of the first meetings of the Durham Committee on the Affairs of Black People in 1935. Years later, as a young teenager, Michaux recalls seeing two water fountains in downtown Durham – one for Whites, the other for Blacks. He also can’t forget being chased out of a “duckpin” alley by some “White folks” looking to beat him up near the Carolina Theater.

It’s history Mickey Michaux refuses to forget, because he sees the legislative clock being turned back by the Republican majority, and fears that along with their apparent thirst for power, will be a ratchetting up of racial tensions, which will ultimately hurt North Carolina.

Michaux says that over his nearly forty years in the state House, his name appears on important laws such as the automatic restoration of citizenship rights for the formerly incarcerated; voting rights and same-day registration; and assistance to HBCUs.

Thankfully, he says, recent court cases have restored many of the voting rights laws the Republicans got rid of. But the onus will be on young leaders coming up, to learn their history, so that they won’t repeat the mistakes of the past.

Dr. Martin Luther King Jr. once told Michaux that “‘we can’t make people love us, but at least we can make them respect us.’ And that’s why we have to keep strong people out in the forefront to make sure that that happens.” It’s a lesson Michaux learned after the assassination of his close friend almost fifty years ago, when he almost dropped out of politics.

But when the people called, Mickey Michaux answered, running for the seat he’s held onto for four decades. He says he’s learned a lot, especially from his short tenure as U.S. attorney, and two congressional campaigns.

When he finally steps down from the legislature, Michaux says, after a long rest, he wants to be around “…so that young people don’t forget the legacy that they have inherited. They are enjoying the fruits of people’s labor in the past… fruits some died for.” He doesn’t want to see those fruits lost.

“We’re about to repeat history that we don’t want to repeat,” Rep. Michaux cautioned.