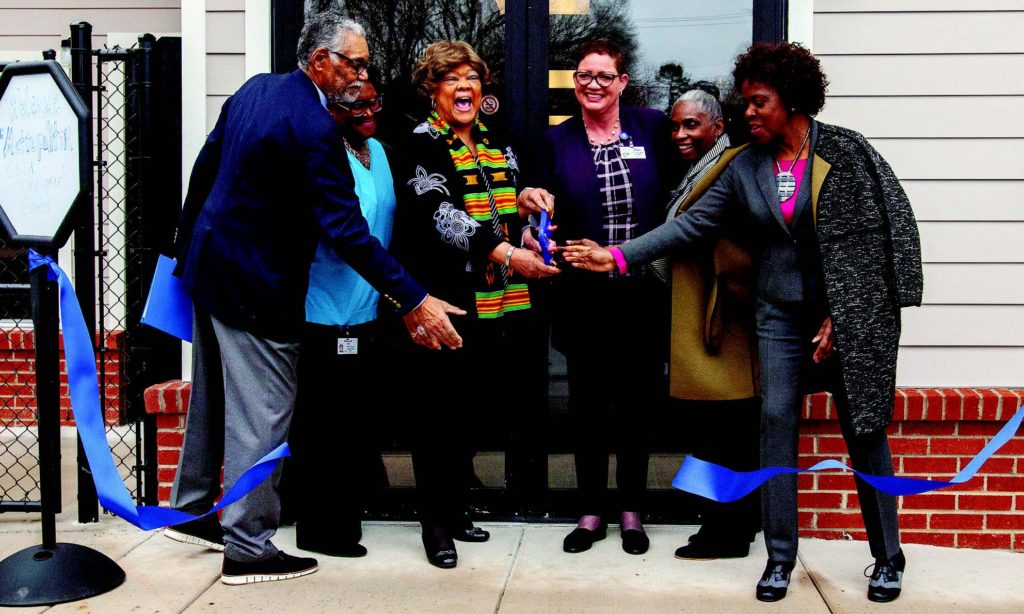 “What makes today so significant, is not only do we have a beautiful facility, but also the rich history surrounding the very ground on which you stand,” said Maria Layne-Stevens, CEO and president of Guilford Child Development.

The new building stands on the 61 year-old historic site at South Benbow Road and Julian Street, which has served Greensboro’s African American children and families since 1959.

The Metropolitan CDC provides Head Start/Early Start services for 48 pre-Kindergarten children in a state-of-the-art, six classroom, 8,000-square foot learning center. At the celebratory ribbon-cutting, speakers recounted the progressive history of a multi-agency community partnership addressing the needs of children and families for more than 70 years.

Brenda James, a member of the Metropolitan National Council of Negro Women, was only two-years-old in 1947 when her mother enrolled her at Metropolitan Day Nursery, Greensboro’s first day care facility for African American children.

“Back then, in the African American community, you had to depend on family members, neighbors or people who were close by to take care of your children if you had to work,” said James.

“One group of ladies said there is a need in the Greensboro community to provide care to small children. The doors opened, I was enrolled and the rest, as they say, is history,” said James, who also served as president of the Metropolitan Council of Negro Women from 1985-1987.

In 1959, the Metropolitan Board and members of the African American community purchased the current site, working with the Greensboro Community Chest — a precursor to United Way of Greater Greensboro. A unique group of community organizations joined hands to consolidate into a single agency planning efforts to provide quality child care for low income families in Greensboro.
The Metropolitan Council of Negro Women, the Greensboro Section of the National Council of Jewish Women, the Greensboro Housing Authority, the Greensboro Community Council, and various community leaders brought together a number of day care centers supported by the United Fund (now United Way of Greater Greensboro) into a single entity – United Day Care Services, Inc. (UDCS). UDCS’ services soon expanded to include High Point and all of Guilford County.

James noted that children in her family as well as children of friends also attended Metropolitan CDC over the years. She said, “The children are able to learn new skills, learn about themselves, and get the chance to socialize with other children they wouldn’t otherwise be exposed to.

“I had such a great experience as a pre-schooler here. It made me want to be a teacher,” said James, who taught for seven years. “It was like family here and I want all children to have that same experience here. It’s really nice to see parents who were once students here, to continue that legacy and enroll their children here.”

Metropolitan Day Nursery closed in January 1990 due to low enrollment and funding, however, it was able to reopen as a Head Start center in March 1990.

James shared that the very first playground equipment used by the center was hand-built by a group of volunteers from the community. Now, the children will be able to play in an area called an “outside naturalized learning environment” which is a natural playground or ‘classroom’ with elements that encourage exposure to wildlife and the ever-changing dynamics of nature.
Layne-Stevens explained that it allows for fundamental opportunities for kids to explore the world around them.

“It allows us to take things from the classrooms and recreate those environments outside and help them build upon what they are learning each day,” she said.

Metropolitan CDC is able to accommodate 48 students, from 1-3 years old in six classrooms, with eight students per class. According to GCD, studies have shown that the first 2,000 days of a child’s life are the most critical in learning and development. The center provides everything for the students: diapers, food, blankets, and more.

“I’m so excited,” said Mary Chaney, Metropolitan CDC director. “The most exciting part for me has been opening the doors and getting all my children back in here. Even the kids are excited about the new center. They know that this place is for them.”

Throughout the years, the Metropolitan Council of Negro Women Greensboro chapter has worked closely with the center, taking the lead on hosting birthday parties for the children, reading with them, and volunteering for daily activities. Layne-Stevens noted that one goal is to continue that partnership by introducing a mentorship program between Metropolitan Council members and parents.

“I’m most excited about what’s to come. It occurred to me that they [Metropolitan Council members] would be wonderful mentors for our parents because the majority of our parents — by and large — are single mothers. It’s going to be an amazing opportunity to give a hand up and not a hand out to expose parents to opportunities and meet others who have been there before and done it and you can too,” said Layne-Stevens.

In 2007, the United Way of Greater Greensboro signed the land deed to the Metropolitan CDC over to GCD.

“The best thing we can do in a community is not just be in it, but be of it. This center is of the community and for the community. I stand on the shoulders of giants who came before me who decided that investing in early childhood development is the greatest investment we could make in a community. I’m so looking forward to seeing children thrive and become the future leaders of tomorrow,” said Michelle Gethers-Clark, executive director of United Way of Greater Greensboro.

The Metropolitan CDC was closed again in 2015, due to a substantial operating loss. The center served only NC Pre-K and had difficulty filling those positions. For the next two years, GCD worked on designing new plans for the Metropolitan Center. In February 2018, GCD was approved to place six modular classrooms on the site. After a tornado hit Greensboro that April, GCD officials decided to request permits for conventional construction of an 8,000 square foot facility on the Benbow Road site.

GCD officials have also submitted an application to the N.C. Department of Natural and Cultural Resources for the Benbow Road at Julian Street site to be classified with a historical designation.

“This is a rebirth,” said Rashad Rodas, director of GCD Head Start/Early Head Start. “This is our center right here. We must protect it, and we must encourage others to spread the energy for learning. It’s much needed in the community and I’m so honored to be apart of the process of this building from start to finish.”