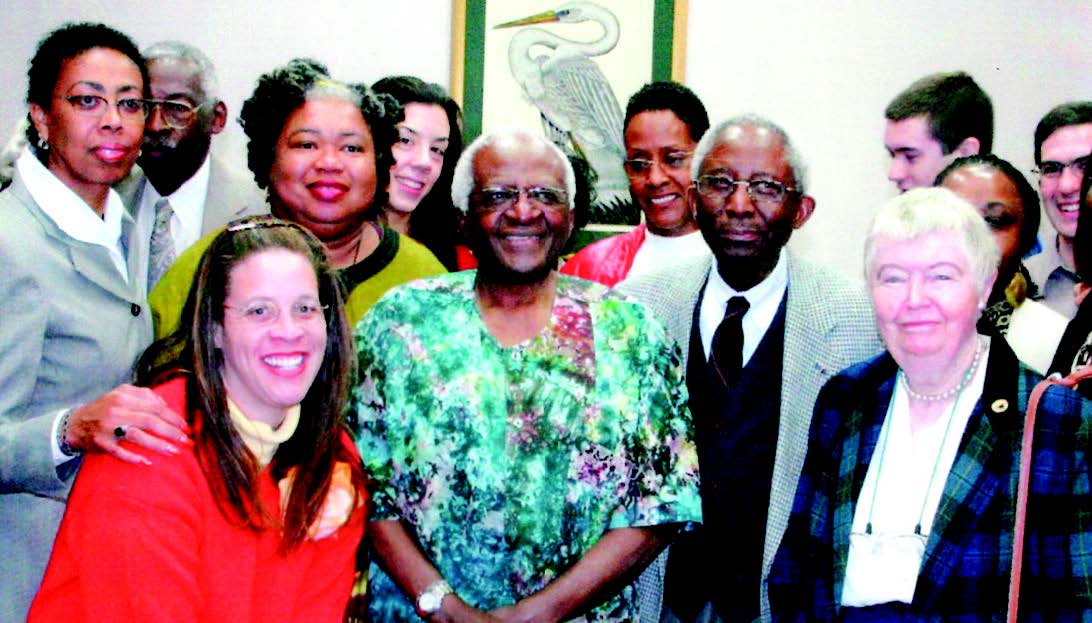 The following commentary was originally published on Nov. 10, 2005

Tuesday evening, I received a call from avid Peacemaker supporter Joyce Johnson with Beloved Community Center and Faith Community Church of Greensboro. She told me, “We’re having a meeting with Archbishop Desmond Tutu on Wednesday morning—the day before his speech for Guilford College’s Speaker series at the Greensboro Coliseum Complex. We believe you should be in attendance.” My heart skipped a few beats and I was deeply honored that Mrs. Johnson thought to invite me to sit in a private setting with the Archbishop— a hero of mine for many years.

I was in the eighth grade when I competed in the local Optimists’ Club’s speech contest on the importance of ending apartheid in South Africa and that the global community should help make this accomplishment a reality. The contest’s judges, old men of the Caucasian contingent, were not receptive towards my presentation. I finished last that day out of seven people. The winning speech addressed the virtues and the deliciousness in, of all things, McDonald’s French fries. It would be several years after my speech (6 years to be exact) to that seemingly apathetic crowd that South Africa’s apartheid system would be dismantled in 1990, and Nelson Mandela would be freed from prison in 1994.

I was pleased to see the Archbishop walk with a spring in his step. He bounced from his seat to shake the hands of all the meeting attendees. During his last Greensboro visit in 2003, the Archbishop had faced a well-publicized bout with prostate cancer. Today, his voice rang with a rejuvenated South African Transvaal lilt.

I was a part of a small group of people and I was the only person present who was affiliated with the news media. I gave my word to wait to inform the world about my “Archbishop Desmond Tutu encounter.” Other people present were Greensboro community members and leaders such as former Greensboro Mayor Carolyn Allen, city council persons Yvonne Johnson and T. Diane Bellamy-Small, Rev. Z. Holler, and many survivors of the November 3, 1979 massacre, where members of the Ku Klux Klan and the American Nazi Party showed up at a Communist Workers Party (CWP) march which advocated for Black and White allyship in the unionization of local textile mills. Members of the Klan and the Nazi Party killed five CWP members and injured 10 others. No one was ever convicted of these crimes.

The Archbishop listened intently to the supporters of the Greensboro Truth & Reconciliation process as well as some of the November 3 survivors. Council members Johnson and Bellamy Small were two of the three council people who voted to support the Truth & Reconciliation hearings. Johnson said she has worked on conflict resolution for twenty-two years, and, more than anything, she wanted people who were directly involved in this tragic incident to have an opportunity to speak.

The Truth and Reconciliation process has provided the people of Greensboro the opportunity to hear from former Communist Workers Party (CWP) members who organized the march: former members of the Ku Klux Klan and the American Nazi Party, the attorneys who tried the subsequent court cases, the judges who presided over them, and the Morningside residents who were caught in the middle of the deadly confrontation.

Many survivors told the Archbishop that the opportunity to testify before the commission was cathartic and helped ease a burden they have carried for twenty-six years.

The Archbishop said, “When people say ‘let bygones be bygones’ remarkably, they never are. An unexamined past tends to be one that gives the impression that a wound is healed, when in fact, underneath, it is festering. Forgiveness is not namby-pamby; it is real forgiveness. It is facing up to the awfulness that happened.”

It is easy for people to point fingers at other places such as Money, Ms., Birmingham, Al., Tulsa, Ok., and Wilmington, N.C. where the injustices of the past continue to reign supreme. Economic and racial inequality exists under our collective noses even in little ‘ole Greensboro. Our city’s leadership continues to turn their heads, rather than address controversial issues with honest dialogue.

Greensboro’s enlightened residents need not fret, the world will truly know of your great efforts to bridge our city’s social, economic and racial divide. As for Greensboro’s blind leadership, may God, along with a few history writers, have mercy on your collective soul.