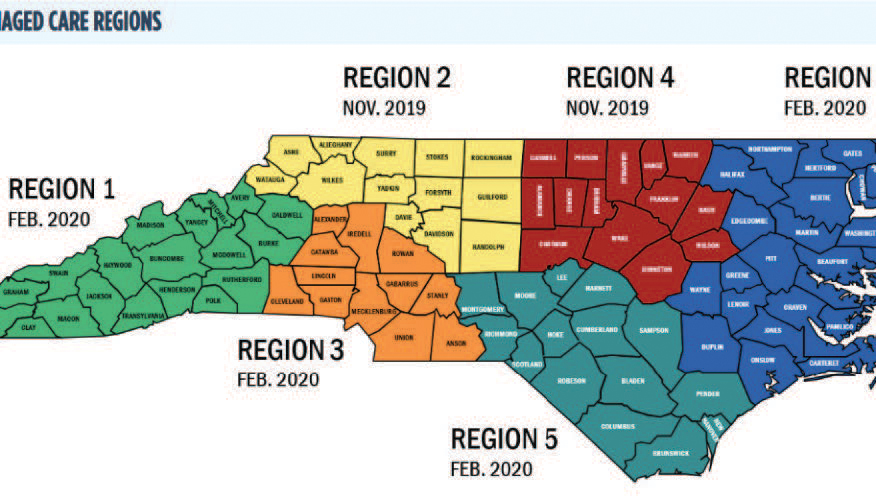 Four companies were awarded statewide contracts, while a partnership made up of managed care giant Centene, the North Carolina Medical Society and the North Carolina Community Health Center Association received the nod to provide services in regions 3 and 5 starting in February 2020.

Most of North Carolina’s 2.1 million Medicaid recipients are likely unaware that the program is about to dramatically change. That’s because, for years, most of the activity to make the transformation has taken place in legislative hearings and departmental conference calls.

But no longer. After years of planning, the changes to North Carolina’s Medicaid system are about to get real.

That was the message from state Health and Human Services Sec. Mandy Cohen to a legislative committee in Raleigh on Tuesday.

Last week, Department of Health and Human Services (DHHS) announced which companies won their bids to work with the state for a total of $6 billion in annual contracts. This week, lawmakers from the House Health Committee asked Cohen to explain publicly how her team at the DHHS decided which companies to provide services to the first 1.6 million Medicaid beneficiaries who will be in the first wave of change.

Beneficiaries will start seeing advertising campaigns roll out in early summer. Companies that won bids will start putting up billboards, sending mailings, and running TV and radio ads encouraging those people, who are mostly low-income children, some of their parents and pregnant women, to choose their health insurer.
“The way we’re going to do the start of managed care is going to be in a phased way. That’s to make sure we get as smooth of an implementation as we possibly can,” Cohen told lawmakers. The regions surrounding the Triangle and Winston-Salem will launch the managed care program on Nov. 1, with the rest of the state following next February.
Contracts for behavioral health providers for the most severely disabled will be issued in several years, once the larger populations requiring more basic care are on board. 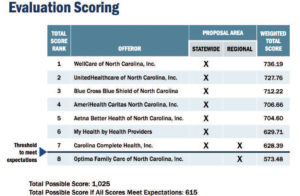 Chart displayed by HHS Sec. Mandy Cohen shows the scores of each of the companies bidding for Medicaid contracts. Chart courtesy: NC DHHS

In the 2015 bill that created this new Medicaid regimen, lawmakers made it clear they wanted to have some locally managed “provider-led entities” (PLEs) with majority ownership by health care providers to provide care.

Out of eight bidders, only three such provider-led organizations made bids for contracts. When Cohen displayed the numerical scores given to those bids by members of the DHHS team, it showed the three PLEs had the three worst outcomes. Only one, Carolina Complete Health, a consortium formed by the state medical society, the state community health center association and national managed care giant Centene, won a contract to provide care in two regions despite departmental reservations.

“We definitely wanted to recognize the fact that a lot of work went into the negotiations around getting to the legislation from 2015 and the contemplation of the provider-led entities. We felt like it was in the service of the intent of the law to include a regional provider-led entity,” Cohen said. “Carolina Complete Health was the only PLE that met minimum expectations.”
Cohen explained that she and Medicaid head Dave Richard decided to give the group only two of the state’s six regions, which will be included in the second phase of the managed care rollout, “to give folks the most time to be ready.”

Another consortium, My Health by Health Providers, made up of the state’s hospitals along with a managed care company based in New Mexico, actually received a slightly higher overall score than Carolina Complete Health, but the group had only bid for a statewide contract and scored lower the other statewide bidders.

Committee chair Rep. Greg Murphy (R-Greenville), a physician who practices at Vidant Medical Center, expressed his disappointment that North Carolina-based PLEs were “locked out” of the contracts. Another member, Hugh Blackwell (R-Valdese) pressed Cohen for details of the decision-making process.

Cohen told him that all the bids were rated on 14 points that were scored in parallel.

“There were very, very, very detailed questions and criteria… and we had a RFP that was nearly [300 or 400] pages long, with an appendix that was even longer, so folks had clear understanding of criteria by which they were going to be scored against,” she explained. “And the evaluation committee needed to use the words on the paper, but they were able to ask clarifying questions, and they did, through the process if things were unclear.”

“It just seemed that the legislative intent … was to have a good mix between provider-led entities and private managed care orgs. I don’t see a big mix there,” Murphy responded. “I understand the scoring process, but … it’s a missed opportunity.“

It’s expected that some of the organizations not receiving contracts will challenge DHHS’ decision before the close of a 30-day appeals period.

Getting Everyone on Board

Most beneficiaries will see little difference in the process of getting Medicaid for now: county social service workers will continue to do perform eligibility screening for applicants. Cohen said beneficiaries don’t have to do anything other than to make sure that their contact information is up to date.

Although that sounds like a simple thing, Cohen said that’s hugely important.

“I will say that we haven’t been good about collecting multiple … ways to communicate with folks. We know most of our Medicaid beneficiaries do have a cell phone, but we don’t systematically collect cell phone numbers,” she said. “We need to start doing that and communicating with folks by text message and not by snail mail all the time.”

But as changes get closer, there will be more public outreach.

Rep. Carla Cunningham, (D-Charlotte), who works as a nurse, said she’s been looking for public outreach since the start of the Medicaid changeover process.
Cohen said, though, that it’s best to wait.

“There’s a fair amount of research that shows that if you actually tell folks too soon when there’s actually not something to ‘do’ you lose them, you want to capture folks at a moment … when you want them to do something,” Cohen said. “So you will see us ramp up a lot of our communications just before and very much during that open enrollment period when there is something for them to do.”