So, forgive him if he chooses to play like a man who appreciates his opportunity to see action on a football field. In the Aggies’ 45-7 win over Division II Edward Waters on a gorgeous Saturday afternoon at Truist Stadium, McDaniel made six tackles, four for loss, four sacks, a forced fumble and a quarterback hurry.
That’s a week after he made his season debut by hitting Bryant quarterback Zevi Eckhaus as he attempted to pass, forcing an interception that led to an Aggies fourth-quarter touchdown. 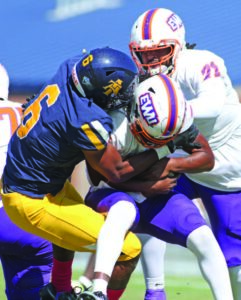 “It’s amazing,” McDaniel said about being back on the field. “I think about it every day and just how grateful I am for this opportunity. Even when the opportunity presented itself, I thought it could have easily gone the other way. So, I am grateful.”

In the two weeks since his passing-rushing ability has been back in the Aggies lineup, the Aggies have forced seven turnovers, and opponents have converted only five of 22 third downs.

“We were happy to welcome Jermaine back,” said A&T coach Sam Washington, who saw his team improve to 3-3 on the season after winning their third straight. “His presence and energy have brought a lot to the football program. He had four plays for loss and a forced fumble. When you get those types of plays, it makes football a whole lot of fun.”

The Aggies’ offense was helpful to McDaniel and the defense because they scored at ease early and often. A&T went 90 yards in five plays, including a 42-yard completion from A&T starting quarterback Jalen Fowler to sophomore receiver Sterling Berkhalter for 42 yards. The drive ended with a Bhayshul Tuten 1-yard touchdown. Tuten ended the day with his fifth straight 100-yard game as he posted 103 yards and two touchdowns.

After an Andrew Brown 28-yard field goal put the Aggies ahead 10-0, a Jacob Roberts’ blocked punt set the Aggies up at the Tigers’ 19-yard line. Five players later, Tuten found himself in the end zone again, this time from six yards out.

Second-quarter touchdowns came from Nicholas Dobson, who caught a 5-yard TD pass from Fowler, and freshman back Wesley Graves, who scored on a 7-yard touchdown run as the Aggies took a commanding 31-0 lead at halftime. Fowler’s TD pass was one of two on the day for the graduate, who threw for 243 yards on 20-for-26 passing.
“Today worked out just as we planned,” said Washington. “It’s very good when what you do in practice carries over into a ball game. We worked very hard in the past two weeks on fundamentals and techniques. We focused in hard on those two things because they really matter. I thought that showed today, and I was pleased with that.”

With EWU in a situation where they had to throw, McDaniel took advantage by putting together back-to-back sacks on the Tigers’ opening drive of the second half. McDaniel’s four-sack day helped the Aggies hold EWU to 55 yards rushing.

But don’t mistake McDaniel’s statistics and his gratefulness for being back on the field as complacency.