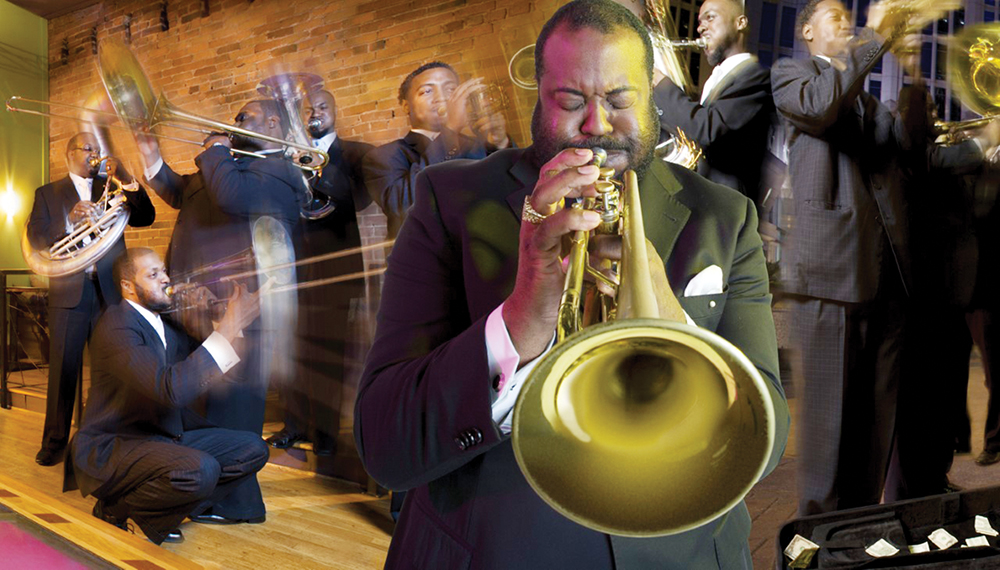 Charlotte’s Cedric Mangum is the leader of a gospel brass shout band, Mangum & Company, which will perform at the National Folk Festival in Greensboro. Photo Courtesy NFF

Almost 100 years ago, Marcelina Manoel da Graça, otherwise known as “Daddy Grace,” founded the United House of Prayer for All People. With this congregation began a new era of gospel, a new passion for the Holy Spirit, and—most of all—a new sound of music coming from a new style of bands.
Shout bands.

It’s the kind of band that Charlotte’s Cedric Mangum knows very well. He’s the leader of the popular gospel brass shout band, Mangum & Company, and he has been moved by the music since he was seven years old. He started on the drums and ended up lead trombonist. In fact, Mangum knows all the shout instruments. At 13, he became the leader of the Charlotte Mother House’s legendary Bailey Clouds of Heaven. Today, at 55, he still plays that role.

Mangum & Company is a hearty combination of 20 to 30 outstanding musicians from congregations across the Charlotte area. Their music boasts an African American flair that focuses on brass instruments associated with jazz and gospel hymns.

Emphasis on gospel. “It’s a spiritual sound,” Mangum says. “The truth is that God is in our music.”

And soon, Mangum & Company will have the opportunity to share their heavenly sound with thousands of people at the 76th National Folk Festival, a traveling festival that celebrates America’s incredibly diverse cultural traditions; it’s coming to downtown Greensboro from September 9 – 11 for the second year of a three-year residency.

North Carolina has been a hotbed for “shout bands” ever since Daddy Grace left his mark in Charlotte in 1926, with approximately 20 bands sharing their joyful noise across the state. The Queen City alone has 17 United House of Prayer congregations and nearly as many shout bands; Mangum & Company is made up of “all-stars” from those congregational bands.

Although Mangum & Company has never performed at a National Folk Festival, they are excited to show off their art. “It’s sharing our music with the world. I love it,” Mangum says. Mangum & Company’s music is for the spiritual and the secular, the weak and strong, the poor and rich. The music runs transcend the physical and material world. “This is all for the soul, meaning it’s not designed for the dollar,” Mangum says. “I’m not trying to make a living doing this.”

Mangum hopes that the music affects his listeners in the same way it affects him. To Mangum, the music is a healing presence, and there’s more to it than just reading sheet music. “Somebody who’s sick can be healed. Somebody who’s burdened down, their burdens can be lifted. Our music can soothe a lot of things in our lives,” Mangum says. “It’s one thing reading music on a sheet, but playing it is different. What makes the music on the sheet come to life is the spirit we bring to it.”

Mangum is part of a congregation that stands firm today, one of about 130 congregations nationwide. What keeps shout band musicians so resilient is their undeniable faith in God and his mercy. Mangum truly believes that through his music, he is a vessel of God.

“The faith that I have is knowing that whatever I’m going through, God is going to bring me out of it,” Mangum says. “It’s knowing that we have that blessed hope.”