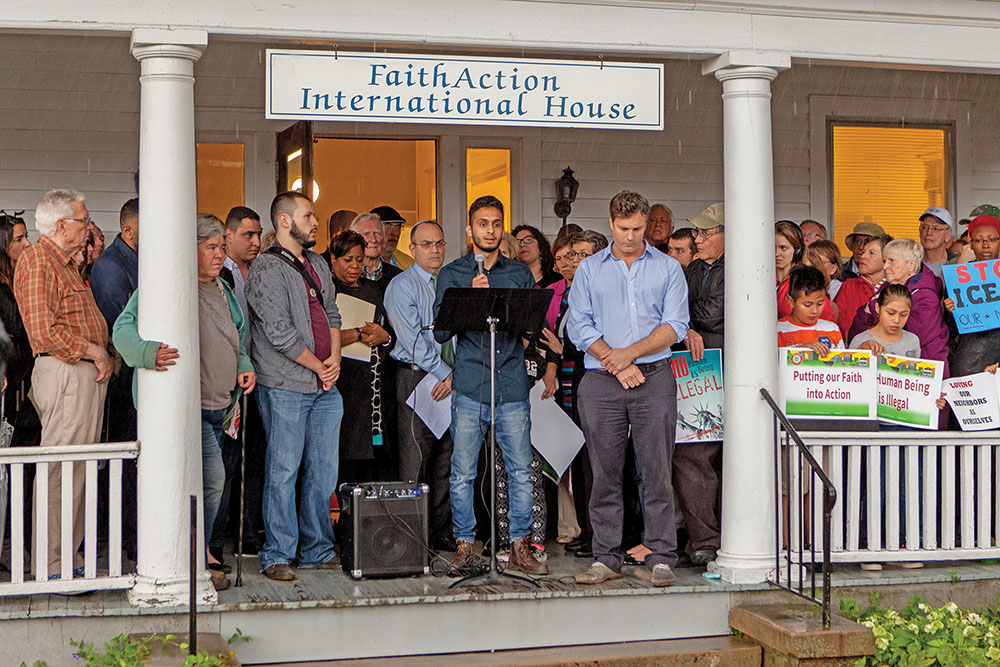 “We’re sad and we’re afraid to leave the house,” said Marlena Reyes, who hugged her children as they sobbed on the steps of the FaithAction International House on Monday evening.

Reyes’ husband was detained by Immigration and Customs Enforcement officials on the morning of March 30, as he and other men traveled to work together. Reyes’ husband was one of six undocumented men detained during that traffic stop, including her cousin’s husband.

FaithAction International House, Greensboro Faith Leaders Council and community allies gathered in support of several immigrant families who have been victims of recent deportation raids in Greensboro. the groups are calling for community support.

A Greensboro resident for 11 years, Reyes said this is the first time she has feared for her family and friends’ safety. She said she gets a call every day from her children’s school because they are afraid something may happen to her.

“I saw it in the news but I never thought it would happen to us. I just tell everyone to be careful, especially when driving. Even a minor traffic violation can make you a target,” said Reyes, who added, “I don’t know what I’m going to do now. I just know that I have to stay strong for my children.”

While President Donald Trump’s “Muslim/Refugee” ban remains blocked by federal courts, immigration supporters are concerned about another order that calls for a drastic increase in the detention and deportation of immigrants.

According to a Department of Homeland Security statement on the current orders, “ICE will not exempt classes or categories of removal aliens from potential enforcement. All of those present in violation of the immigration laws may be subject to immigration arrest, detention, and, if found removable by final order, removal from the United States.”

Under the former Obama administration, ICE agents were instructed that undocumented immigrants convicted of serious crimes would take priority for deportation. Now under President Trump, enforcement offi-cials have been directed to seek the deportation of anyone in the country illegally.

The Rev. Diane Givens Moffett of St. James Presbyterian Church, a co-leader of the Greensboro Faith Leaders Council, reminded those who gathered the importance of coming together as one community, because there was a time when her ancestors were treated with indifference.

“We know what it means for families to be split up like they were playing cards,” Moffett said.

According to FaithAction, there have been at least two ICE (Immigration and Customs Enforcement) raids in Greensboro that have led to the detention of nine undocumented residents. The majority of these individuals have no known criminal history, rather misdemeanor immigration violations, and many could have valid asylum claims. These recent raids have devastated local families and created even greater panic and fear in the community. FaithAction estimates there are about 10,000 families in Greensboro with a parent who might be undocumented or working on their status.

“These aren’t only our neighbors and friends. These are sons and fathers with hopes and dreams like the rest of us, with no known criminal history. Fleeing your home to escape poverty or vio-lence does not make you a criminal,” said David Fraccaro, executive director of FaithAction International House.

Many of those detained have been sent to detention centers in South Carolina and Georgia, in-cluding Zack Naas’ roommate. Naas, who has been living in Greensboro for two years, came to the U.S. from Libya on a student visa. On Friday, March 31, ICE agents came to his apartment and took his roommate to a detention center in Winston-Salem before he was moved to Georgia.

“We don’t feel safe here anymore,” said Naas. “This is bad for everyone and worse on people who are not criminals.”

Reyes and Naas both say they are afraid of the conditions their loved ones will be sent back to in their home countries.

FaithAction leaders note that they receive calls and visits daily from people who fear interac-tions with ICE agents that could lead to their families being ripped apart, and people being re-turned to devastating poverty and violence, even death. There are also concerns that children will be kept away from school and victims of violence may choose to remain silent out of fear of interactions with law enforcement.

The community groups and advocates that gathered urged citizens to contact their elected offi-cials to call for a clear and comprehensive pathway to U.S. citizenship.

Rev. Julie Peeples, a member of the Greensboro Faith Leaders Council and pastor of Congregational United Church of Christ, called her church a ‘sanctuary church’ that is offering support to those families in need.

“If the word sanctuary means anything, it means a safe place for everyone,” she said.