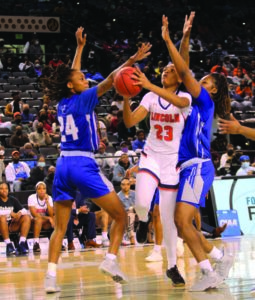 Lincoln (22-7 overall) finished off ECSU with a 20-8 run in the final seven minutes to pull away from a 47-44 lead. Brown, named Tournament MVP, scored eight points during the spurt. The Vikings (21-7 overall) tried to make a dent in their 10-point halftime deficit but got as close as three points before the Lions’ title-clinching run.

Sireann Pitts, the CIAA Defensive Player of the Year, stood out for Elizabeth City State with 15 points, 14 rebounds and two blocks. Felicia Jackson added 10 points, five assists and four rebounds for the Vikings, who led 22-21 with 4:45 in the second period.

It was then that Morton sparked what turned out to be a game-changing run. She drained two three-pointers and scored on a nifty layup during a 13-2 surge that gave the Vikings a 34-24 halftime lead.

The Lions maintained their working margin throughout the second half and closed out strong to gain the title. The Vikings will await the release of the NCAA Division II Tournament brackets to see if they qualify.

Livingstone captured the Sportsmanship Award. The women’s bracket featured several upsets this week, but the conference’s top two teams avoided the pitfalls to meet in the CIAA Title game.

The contest showcased two teams gunning for their first-ever conference crown and two coaches – Janice Washington of Lincoln and Tynesha Lewis of ECSU – who led their teams to the title game in their first season.

In the regular season, both teams won by double digits on their home courts in the two-game season series.