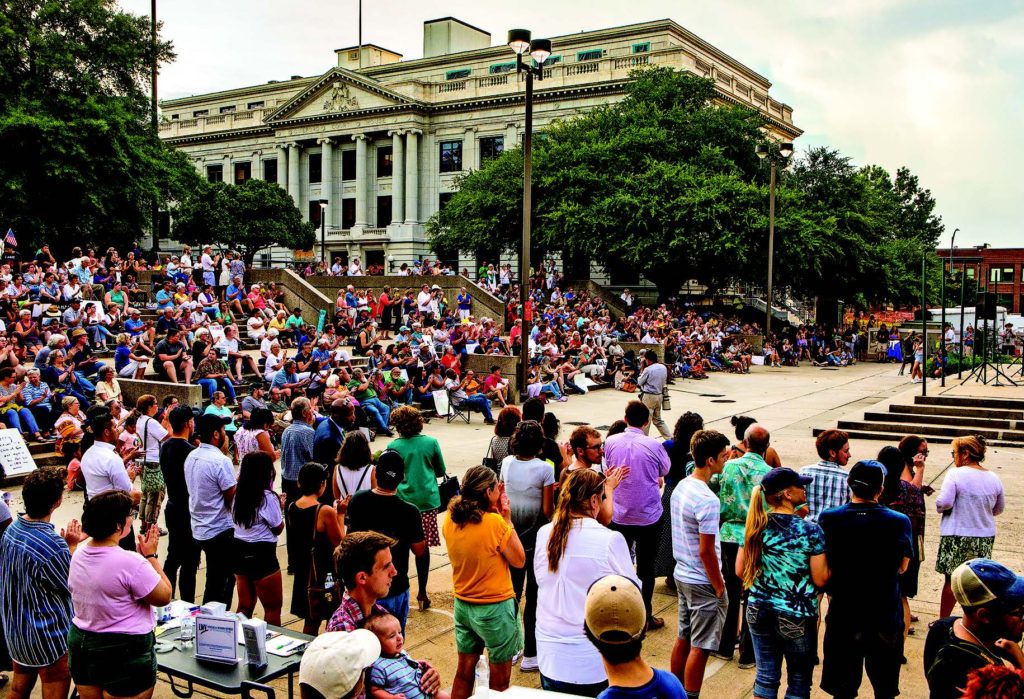 Area residents gather in Downtown Greensboro for the Lights for Liberty vigil to oppose President Trump and his administration’s current immigration policies. Photo by by Ivan S. Cutler

Hundreds of residents gathered in downtown Greensboro on July 12 for a public vigil to raise awareness about the plight of detained migrants, specifically at the southern U.S. border.

The vigil in Greensboro was just one of 700 organized events around the country in response to reports of nationwide raids on immigrants. Protestors held signs calling for the end of concentration camps and the inhumane treatment of migrant children and adults.

This event was organized in a non-partisan manner by private citizens in collaboration with local non-profit organizations. The vigil included local and state leaders, Latinx musicians and artists, as well as migrants from around the world, who shared their stories. According to nationwide news reports, Immigration and Customs Enforcement (ICE) were scheduled to carry out a series of raids to arrest and deport thousands of undocumented immigrants, beginning on July 14. ICE agents are expected to target at least 2,000 migrants who have received final deportation orders. According to the Federation for American Immigration Reform (FAIR), about 1 million migrants have received final removal orders.

Rev. Julie Peeples of Congregational United Church of Christ in Greensboro shared with vigil attendees a list of 10 things to do to help keep families together such as, call legislators, learn the history of ICE, get involved with local organizations, assist the local immigrant community, donate, support the work of church’s offering sanctuary, invite others to join the movement, don’t do business with companies that support deportation, visit a detention center and pray for your neighbors.

FaithAction International House, a local immigrant advocacy organization, has also worked to protect immigrants by making sure they know their legal rights and providing an ID program in order to safely identify themselves to law enforcement. Since the program’s inception six years ago, FaithAction International has obtained written or verbal agreements with 24 law enforcement agencies across North Carolina. The Guilford County Sheriff’s Office is now the latest law enforcement agency in North Carolina to sign a memorandum of agreement with FaithAction.