Some have said the seeds of democracy were planted in the first book of the Bible, specifically with the announcement that humans are made in the Image of God. Indeed, God announced to the heavenly host on the 6th day after five previous days of extravagant creation, “’Let us make humankind in our image, . . .’ So God created humankind in God’s image, in the image of God, God created them . . .” (Genesis 1:26-27). If each human is so valuable as to bear the image of God, clearly each human is valuable enough to be fairly represented in a democratic government.

Now that the 2020 Census results have been tallied, representation is being realigned across local communities, states, and at the federal level. The good news is, North Carolina will gain a seat in the U.S. House of Representatives, giving us 14 congressional districts. The bad news is, the process for drawing congressional district lines is being shrouded by the N.C. General Assembly.

The decisions made in the redistricting process will affect us for the next decade. Think of all the laws that have passed or failed to pass in the past decade because we’ve languished in districts at the state and federal level that do not represent the majority of North Carolinians. The many are ruled by the few, which is far cry from authentic democracy and a mockery of the One in whose image we are each created.

It’s worth noting that the creation story found in the first chapter of Genesis was likely written and recited for the People of God during the Babylonian exile, over 500 years before the birth of Jesus. Like all exiles and wars then and since, people were confronted with massive life disruption, destruction of home and property, and forced relocation. Chaos like that calls for structure from another source. The prophets and priests of those exiled from Judah offered such structure by reminding God’s people of our place in the order of creation and reminding us of our worth by emphasizing our Godly images.

We still rely on that reminder today when confronted by chaos, even chaos that comes in the form of legislative agendas that do not privilege the worth of each person. We can produce a long list of legislative machinations that devalue many in North Carolina, such as the failure to expand Medicaid or to fund adequately the Department of Environmental Quality so they can protect residents from industrial pollution. 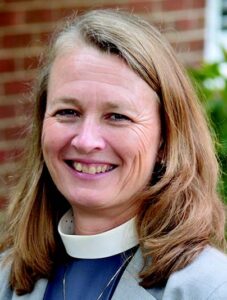 Now we are being confronted by a process that condenses the locations for public comment about our congressional districts. Hearings are scheduled in only 10 counties out of 100. Not surprisingly, many of our rural counties in northeastern N.C. and western N.C. will be omitted. Surprisingly, no public hearings are scheduled for critical population centers like Wake, Guilford, Buncombe, Gaston, and Union counties. Even more troubling, there are currently no plans for community input after the district maps are drafted. All of which means, if we want a voice in how our voices are represented in Congress, we need to speak up early and often.

The maps matter. When the lines are drawn they should fairly represent the diversity of North Carolina. Partisan districts devalue the vote and, by extension, the voter, the one created in the Image of God. Packing people into congressional districts and cracking districts to dilute voices creates the kind of chaos we’ve had in N.C. for the past decade. This is our once in a decade opportunity to speak boldly for the right to be represented fairly.

People of faith regularly pray, read scripture, and worship together. These are the means through which we cultivate the strength to face the chaos around us. Now is the time to take our faith to the public square and speak against impending chaos. The record in the Bible includes many examples of people speaking truth to power — think of Jeremiah before King Zedekiah and Paul before the Areopagus. Now it’s our turn. We take with us the truth found in Genesis. We are created in the Image of God. We matter.

Jennifer Copeland is the executive director of the North Carolina Council of Churches.