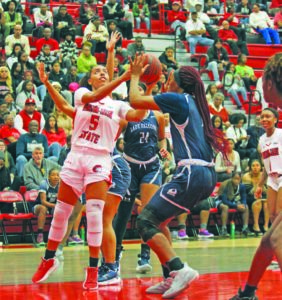 Points went back and forth in the first quarter until the Rams eventually went up eight with 3:55 left to play in the quarter. They finished the quarter up 12, 26-14. Taniah Wilkins and Valencia Carroll hit back-to-back jumpers to put the Rams up 13, 30-17 with 6:51 left to play in the half. Amaya Tucker hit a three and Taniah Wilkins made two free throws to put the Rams up 18. WSSU went into halftime with a 16-point advantage, 46-30.

Before the game, the Rams also recognized Amaya Tucker who scored her 1,000 career-point during the break.